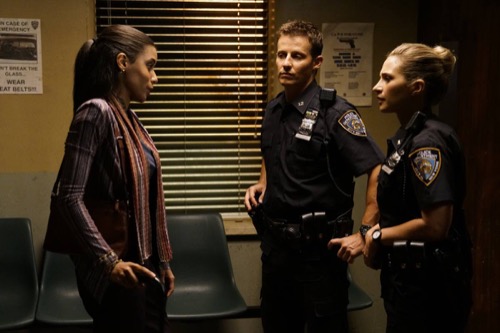 Tonight on CBS their hit drama starring Tom Selleck Blue Bloods airs with an all-new Friday, October 6, 2017, episode and we have your Blue Bloods recap below. On tonight’s Blue Blood Season 8 episode 2, as per the CBS synopsis, “Frank receives an order from the mayor to attend a parade honoring a man who served time for conspiring in an attack against the police. Meanwhile, Danny investigates the return of a teen who suspiciously disappeared 13 years ago; and Jamie and Eddie help a young woman they believe is being exploited by a congressman.”

The Reagans were forced to get into politics on tonight’s episode of “Blue Bloods” when a prominent congressman was involved an altercation. The congressman had been heading back home after a long day in front of the crowds when the woman that was with him had tried to flee the car. Andrea hadn’t even waited for the car to fully slow down when she jumped out. But the congressman had followed her and had talked her into going back into the car. So Jamie and Edie who were serving as his protective detail had asked him if everything was alright.

They had seen how agitated Andrea was and there was just something about Richard Walters that bugged Jamie. Jamie and Edie had been watching the congressman all day and Edie thought Walters was wonderful however Jamie had his suspicions. He didn’t believe there was truly a politician out there that did things from the goodness of his heart and so he didn’t fall under Walters’s spell. But Jamie and Edie were serving as protection detail for as long as the congressman was in town and so Jamie decided to use that opportunity.

Jamie later went up to the congressman and asked about the altercation. But the congressman had explained that his companion Andrea had been concerned about her family and if Walters was going to bring the states in time. So Walter said that he was going to have problems with that and that’s why Andrea had been so agitated yet he also said that he wasn’t concerned about Andrea’s mental state and said what happened hadn’t been anything big. And so Edie wanted to take his explanation why Jamie did not.

But Jamie wasn’t the only one dealing with possible and political fallout. Frank had unfortunately gotten dragged into walking the West Indian Parade because she ordered him to do it even as he had wanted to protest the event. The event was apparently honoring a man named Nigel Morgan that had been part of an attack on cops. So Frank hadn’t wanted to go because he had wanted to stand by his men and not lose their trust, but Frank was getting heat from the situation on all sides. The mayor had ordered him to join her and Frank’s own team had wanted him to boycott.

So Frank had tried to find a way and appease everyone. He asked the mayor that if she was going to force him to walk that she should announce publicly. That way his officers would understand why he had to go and the mayor could spin the whole thing as trying to bring the community together. But that didn’t work on anyone. The mayor had done as Frank asked and Frank continued to get heat from his officers that didn’t want him going to the parade. They thought that he should ignore the mayor’s orders and just not go though that left Frank’s hands tied.

Jamie was also stuck because he did find out the truth about the congressman and had been asked not to lift a finger. But Jamie knew that he couldn’t Andrea in her position. He found out that Andrea had been brought to the states to be the face of the congressman’s campaign and that since then she has been kept prisoner. She wasn’t allowed to travel by herself, get paid for her work, or see her family however the congressman also held her visa and could deport her at any time. So Andrea asked Jamie and Edie not to do anything because she didn’t want to get deported or risk angering the congressman.

Only what the congressman was doing was modern day slavery. He made Andrea work for him and controlled her entire life like an evil dictator. But Jamie and Edie went to his sister Erin. Erin had looked at Andrea’s case and she said that Andrea had an HB-1 visa that the congressman must have pulled a lot of strings to get, but she said that Andrea would be deported if she got fired and that there wasn’t an even a grace period for her to find another job. So, then, Jamie asked Erin if they could do anything about Andrea not getting paid and Erin said that she could only bring up criminal charges if they could prove it. And sadly they couldn’t.

Jamie and Edie had no proof of Andrea’s abuse and so all they could do was threaten the congressman. They went to Walters and admitted they found out the truth about Andrea. So they told the congressman that unless he wanted to be on the front paper from coast to coast than he had to start paying Andrea. Andrea was to receive back pay as well as steady income and the congressman had to live up to his promise of bringing Andrea’s family over. And so Walters said he would do it yet warned the police officers.

The congressman had said that Jamie and Edie had no idea what they were doing. But Jamie knew that he had to stand up for what’s right and decided to take a forceful approach to help Andrea. Frank on the other hand had looked into the incident with Nigel Morgan and had found out that the chain of evidence had been broken by the officers on the case because they had wanted to get Nigel so bad. So Frank had handed that file to his assistant Baker. Baker’s godfather had been one of the police officers injured in the bombing and she hadn’t wanted Frank to go to the parade.

Baker thought Frank should sit out despite what the mayor said. But Frank had come up with another solution. He had asked the mayor to release a statement thanking the police for watching over everyone and handling the parade. So she eventually got Frank to march with her and someone had thrown a beer bottle at his head. Frank had received a cut over his eyebrow and some bruising from that however his injuries were mostly superficial and hadn’t stopped him from going to dinner with his family.

His family had naturally made fun of the injury, but otherwise they were fine. Danny had looked into a missing person’s case and had learned that a boy he used to know had killed his sister and then paid a hooker to impersonate her in order to throw off suspicion. So Danny had been forced to break some bad news. But he had taken on the case because he knew that’s what Linda would have wanted and in the end he got justice for a family that will probably never recover from what’s happened!