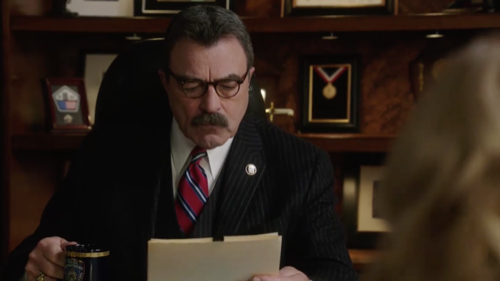 Tonight on CBS their hit drama starring Tom Selleck Blue Bloods airs with an all-new Friday, January 13, 2017, episode and we have your Blue Bloods recap below. On tonight’s Blue Blood Season 7 episode 12, as per the CBS synopsis, “Danny (Donny Wahlberg) works as a bodyguard for an ex-con who served time for someone else, so Danny searches for the real criminal. Meanwhile, Gormley’s wife has a request for Frank; and Jamie (Will Estes) and Eddie grow reflective when they observe a lovers’ spat between two cops.”

Frank had gotten a surprise visit at the office. He was apparently talking to his assistant about what should and should not allowed on his birthday when Lieutenant Gormley’s wife of all people had knocked on his door. But Sheila had needed to see him for a reason and not because she had just wanted to say hi. Sheila had come by the office on the pretext that her husband forgot his heart condition medication however what she really wanted to talk about was how much her husband was being undervalued at the office. So Frank had wanted to know why she would think that?

However, Sheila thought that way because her husband had told her he felt undervalued. Gormley had felt like Frank didn’t want to use him as a face of the organization because he lacked the polish and the education that would reassure others that he wasn’t a buffoon. So Sheila had come down to Frank’s office to ask him to give her husband a chance. She knew that Gormley was a good cop and she hadn’t wanted to see him get hurt yet Frank hadn’t known how to talk to Gormley about what Sheila told him.

Frank hadn’t known that there was a problem or that he had made Gormley feel like he had embarrassed him. So he had asked Moore for his advice on a plan he had come up with though Moor hadn’t thought it was any good. Yet, neither of them could come up with an alternate plan so they had to follow through on what Frank worked on meanwhile Frank’s son Danny had decided to accept the oddest of offers. Danny had decided to accept a position as a bodyguard to Ernie “Goodnight” Mason.

Danny had sent Mason to prison for twelve for a crime they both knew he didn’t commit. Though Mason had confessed to the crime because Duwan Brown had bribed him. Duwan had been a known criminal in the neighborhood and legend has it that he had ordered the hit on the victim. So Danny had agreed to be Mason’s bodyguard as a way to get close to Mason’s associates with one of the being Duwan Brown, but the reason Mason had hired Danny was because he knew his life was in danger.

Mason wasn’t sure if the victim’s family or possibly Duwan would make the first move however he knew he needed help and he didn’t have any friends left. The ones that he cared for and even the ones he loved all abandoned him when the money dried up. But unfortunately that went for Mason’s family as well. Mason’s girlfriend Donna had moved on with someone else and she had broken the one promise that she had made to Mason. She had allowed their son Shawn to go into boxing despite Mason wanting his son to grow up and be his own person.

Only Donna naturally had a way of justifying her actions. She said that it had been either boxing or a gang for Shawn. However, Mason didn’t want his son becoming a boxer like he was and Danny had had to drag away from Donna before he physically attacked her. So the next place that Mason had wanted to go was to the gym. He knew that his son would be there practicing and he had really wanted to see him yet sadly his son didn’t want to see him. Shawn had said that he wasn’t a part of his life and had punched his father when the other man refused to leave.

Yet, Mason eventually got the picture and the hit that had been taken out on him had made everything clear because that’s when he knew that Duwan wanted him out of the picture. Duwan was with Donna now and he had his guy being Shawn’s coach. So Duwan had taken Mason’s family and didn’t want to hand it back or pay Mason for those twelve years he spent in prison though funnily enough it had been Duwan’s actions that made Mason turn on him. Mason had nowhere to go and no one to miss him so he told Danny that he would testify against Duwan.

Mason had just wanted to see his son Shawn’s match first before he set up Duwan. So the two men had seen Shawn’s fight and that he won, but Danny had convinced Shawn to agree to dinner with Mason tomorrow night so Mason had wanted to make that dinner. Though Duwan had been prepared to get rid of Mason and he had confessed to setting him up for the murder of Stannis. Then he told him to go out the back because he had men waiting in the front in case the meeting didn’t turn out well. And so Mason knew he was going to die.

He knew it the second that Duwan told him to go out the back so he had said goodbye to Donna and had walked to his death knowing that Duwan was going to go to jail. But losing him had matter more to Danny than he had let on. He had truly liked Mason and he had wanted Mason to make that dinner with his son however it wasn’t meant to be and all he could do was arrest Mason’s killers. So Danny did that and then he later celebrated his father’s birthday. Frank normally didn’t like his birthday so it had been a push for him to accept any kind of gesture or gift.

However, Frank had gotten over his childhood birthday’s disaster and the first person that had given a gift had been Gormley. Gormely had never told his wife that he felt undervalued. She had apparently made it up because she wanted her husband to be treated better yet she and Frank had seen that Gormley could handle himself when he had done an interview on behalf of Frank’s. So Frank realized that he should have been giving Gormley some recognition and he hadn’t mind the gift card to dinner afterward.

So Frank went to his birthday celebration a man at a peace and he never found out that Jamie semi cover an office roman between two other cops that went sour.