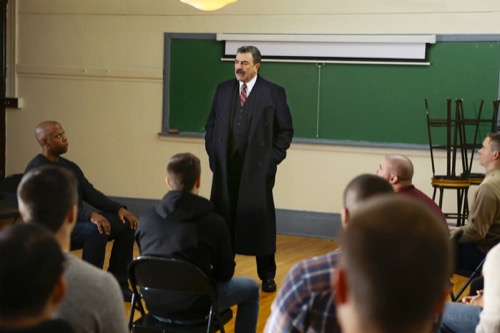 Tonight on CBS their hit drama starring Tom Selleck Blue Bloods airs with an all-new Friday, January 20, 2017, episode and we have your Blue Bloods recap below. On tonight’s Blue Blood Season 7 episode 13, as per the CBS synopsis, “A child-abuse case gets complicated for Danny (Donny Wahlberg) and Baez (Marisa Ramirez) because of an individual’s diplomatic immunity, so Frank (Tom Selleck) gets involved, even though he doesn’t have jurisdiction. Elsewhere, Eddie (Vanessa Ray) and Jamie (Will Estes) deal with a robbery while they’re off duty.”

A third grade teacher had been concerned about a student so hers. She had apparently been watching everyone complete an exercise when she noticed that Malik Nejair was in so much pain that he couldn’t even move. But her 911 call set off a chain of events. The police had gotten involved and Malik had been treated at a hospital. So the doctors had noticed that the kid was being abused and it had been reported however Danny and Baez had later found out that there was nothing they could to protect Malik from his abuser. The abuser was unfortunately the father and he had diplomatic immunity

Diplomatic immunity meant that the visiting diplomats from various countries couldn’t be tried for a crime in the US and so the police technically couldn’t touch’s Malik’s father. However, just to be clear Frank had gotten an official visit. Frank had been visited by an official that told him to back off and not mess around with the diplomatic community. So Frank had tried to stand up for Malik and his rights in the matter yet his own daughter had been dragged in to get him to back off. Erin had been specially assigned by the District Attorney’s office to handle the matter between the cops and Malik’s family and so she knew that her Regan connection was being used.

Though Erin hated that she was being used. Erin likes her job yet she didn’t want to brought in on a case that required she babysit her brother Danny and frankly Danny hated that his sister was the one reigning him in. He thought that Malik should be protected and so he tried to find a way around the immunity. So Danny eventually got Child Services involved. Danny had Malik’s case given to them and so Malik was going to be remanded into foster care where he would be safe. And, well, the powers that be didn’t like that. Frank had gotten another visit and he had been told that the Moroccan government was upset about what was happening.

They had thought that Malik should be returned to his parents and that Frank should “stay in his lane”. But neither Frank nor Danny were going to do that. Danny had wanted to make sure that Malik was safe so he investigated Malik’s case with Baez. They had talked to teachers and they had even talked to the doorman of Malik’s building. So the detectives found out that it wasn’t just Malik that was being abused. His mother was also getting hit and no one had said or done anything about because they knew her husband was protected yet Danny and Baez had wanted to use everything they could find to build a case in Family Court.

Elsewhere, however, Jamie and Eddie had run into a little problem. The officers had been on a double date with Eddie’s boyfriend and her sister when two armed robber showed up at the restaurant. So Eddie and Jamie kicked into gear. They pulled out their guns and had managed to take down the bad guys with little to no serious injury. Yet, Eddie’s boyfriend hadn’t liked seeing that part of her. He had apparently been terrified during the robbery and he hadn’t felt comfortable about Eddie having a weapon much less discharging it. And so Josh had dumped her because he had preferred her to be a damsel-in-distress and Eddie wasn’t that.

Eddie had been pretty broken up afterward because she had truly liked Josh. However, her temper did kick in at the end. Eddie had hated the fact that Caroline had been impressed when Jamie took down the perps and kept calling him meanwhile Eddie had to uphold certain standards. So she had thought it was unfair that men could get away with being strong and she had to pretend to be weak, but Jamie had tried to cheer her up. He had told her that he thought she had been brave at the restaurant and that he had been proud of her.

Only Eddie had been hurt by Josh’s decision and so Jamie had asked his family about it at Sunday dinners. He had wanted to get their opinion on what Josh did and they had reaffirmed what he said. They thought that Josh had been willfully ignorant of Eddie’s job and that he had ignored that she was a cop though couldn’t handle the actual reality of it. But the family had talked about jobs that might others off and they had all had examples. Like the time Jamie’s fiancée had dumped him because of his job. And so some people don’t want to find themselves with a cop. They don’t want to worry about anything happening to their partners.

Though Malik’s mother was different. She had told the cops that she wouldn’t say anything against her husband because they couldn’t protect her or her son yet things changed after child services voted in favor of the child. They had thought that Malik would be in danger if he ever returned to his father’s care and so he had been sent to foster care. So losing her son had been Malik’s mother’s breaking point. She had waited for the perfect moment and had then shot her husband in broad daylight. And it was sort of funny that the cops couldn’t touch her or her gun because she had diplomatic immunity as well.