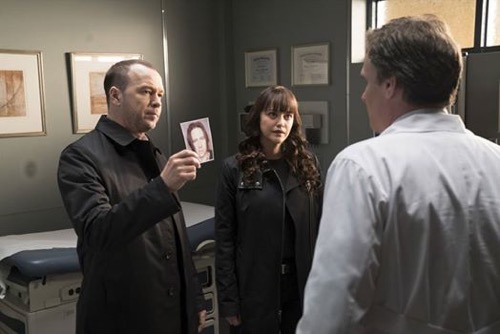 Tonight on CBS their hit drama starring Tom Selleck Blue Bloods airs with an all-new Friday, February 10, 2017, episode and we have your Blue Bloods recap below. On tonight’s Blue Blood Season 7 episode 15, as per the CBS synopsis, “A man is murdered 10 years after he killed a mother and son while driving drunk, and the investigation leaves Danny (Donny Wahlberg) and Baez facing a dilemma. Elsewhere, Anthony is put in a difficult position when Erin asks him to wear a wire when meeting an old friend who has mob connections.”

Danny and Baez had a hard time on their latest case. They had been given stabbing victim who had neither a wallet or an ID on him when he had been however the neighborhood wasn’t a typical bad part of the city and there had been no witnesses around. But there had been a security camera trained on that alley and so the detectives had checked it out. They both knew that the cameras aren’t always reliable and that’s why they didn’t have much faith in it when they got it. So it had come as a shock to the both of them when the camera did catch the murder and showed that it hadn’t been a simple robbery.

The victim had walked behind the building and he hadn’t been running or showing any sign that he knew what was about to happen. However, someone under an umbrella had come across him and had stabbed him instantaneously. Almost like it had been a hit and that the robbery afterwards had been done to cover it up. So the detectives ran the victim’s DNA to identify him and they learned that his name was Lee Bukowski. Lee had gotten arrested for DWI and so that’s his DNA was in the system yet Lee’s hadn’t had anyone that missed him. He had an ex-wife that he had abused, a son he hasn’t seen since the young man was nine, and no one at his office bothered to shed a tear.

Everyone that had apparently known Lee hadn’t liked him. Yet, their alibis ruling out a few of them and so Danny decided to check on that DWI because he thought something might come out of it. And something did come out of it. Danny had later found out that Lee had actually killed a woman and her son while he had been driving drunk and that he had gotten out of the charges by having an expensive lawsuit. The victims though had had a father and husband who had told interviewers that Lee deserved to die for what happened to him. So the detectives checked out their number one suspect and they had been fobbed off with a lame alibi.

Holt had said that he was home alone in bed. Though that’s not a story that could honestly be verified and the detectives had known that Holt would know how to cover his crime. Holt had worked in the Medical Examiner’s Office and so he knew about the little things. Like DNA and Evidence. So Baez had said that it might not be a coincidence that Lee had been murdered when it was running, but Holt had been smart. Holt had left his cell phone at home on the night of the murder which meant it didn’t ping off of any cell towers and so the detectives had wondered if they could use the cell phone differently.

They had searched Holt’s phone records checked and it had pinged off towers near the crime scene several times in the weeks leading to the murder. Like Holt had been watching and waiting for the right opportunity. But Baez had wanted to walk away from the case. She had told Danny that they would have both done the same thing to Lee if Lee had killed their family and so she thought it would better to just leave the case unsolved however Danny hadn’t wanted to do that. He said that they were cops and that they had to properly investigate the murder even if they did think Lee might have had it coming.

Danny wasn’t happy about investigating Lee’s murder yet he had tried to find the evidence and it was up to the ADA to decide if they had enough to arrest Hot. However, Danny had talked to his sister and she had said that there wasn’t enough evidence. Erin had found a whole in everything that Danny had presented her so he had thought he was in the clear. Danny had thought that he could do as Baez suggested by shutting away Lee’s file as unsolved only Erin had asked him what about parking tickets. Erin had wanted to know if Holt’s parking tickets revealed where he was like it did in the Son of Sam case.

Yet, Danny had been happy to say that Holt didn’t drive and he had actually used the subway. So Danny and Erin both came to unfortunate conclusion once they realized that Holt took the subway. They had realized that Holt might have been captured at the nearest subway to the crime scene and that Danny hadn’t even thought to check though there was no turning back once he did. Danny had ended up finding Holt on the cameras and it had proved that he hadn’t been home like he claimed so Danny had enough to arrest Holt. And he chose to talk a high-priced lawyer into accepting Holt as a client before he had carried out the arrest.

Danny had known that the system wasn’t affair and he had wanted to give Holt a fighting chance. Though his sister had come through for him in a big way. Erin had helped Danny figure a few things out and she had also gotten Anthony to carry out a near miracle. Anthony had this old friend from childhood that had gotten mixed up with some Russians he shouldn’t have and so Anthony had talked the friend into handing over everything he had on the bosses to the DA’s office. So in return Anthony had protected his friend and had given Erin a huge case with a bow on top because she had decided to trust his judgement.

Also, Frank and Jamie had talked about whether or not he was happy as a beat cop and Jamie had said that he was. Jamie knew that no one wanted to promote him because his father wanted his kids to make it on their own merits. But that sort of attitude was hurting Jamie’s career in a way he never did on either Danny or Joe’s. So Frank has started to rethink his policy.