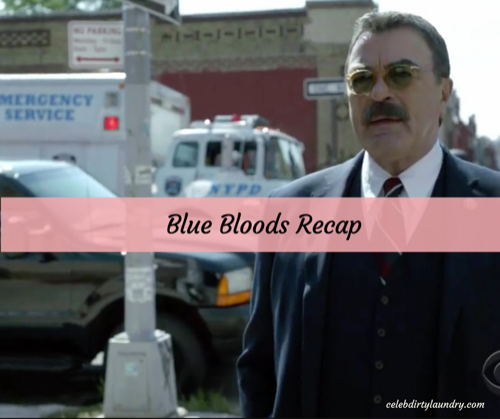 Tonight on CBS their hit drama starring Tom Selleck Blue Bloods airs with an all-new Friday, March 10, 2017, episode and we have your Blue Bloods recap below. On tonight’s Blue Blood Season 7 episode 17, as per the CBS synopsis, “An EMT doesn’t respond to his wife’s distress call when she has an allergic reaction to medication, so Jamie (Will Estes) and Eddie suspect foul play. Meanwhile, Erin realizes she may have convicted an innocent man; and an exposé on Garrett leads to a PR crisis for Frank. (Tom Selleck)”

Jamie had had a few questions about a 911 call that he and Eddie had answered. The two had shown up at an apartment where a woman was going through anaphylactic shock and her EpiPen wasn’t working however something about the crime scene and the victim’s husband had seemed off to Jamie. He had found out the husband was an EMT and that the husband had heard his address over the comm only he didn’t go to his wife. But the husband had an explanation for that. He had said he was answering another call at the time with his partner and that they had to do their jobs. So Jamie had checked that out and he had learned that it wasn’t true.

Jamie had found out the husband lied to him when he called the other man’s supervisor and heard that the husband had been off the clock when his wife had gotten sick. However, Eddie had thought that the husband might have forgotten it and she wasn’t as suspicious of him as Jamie was. So Jamie had tried going to his brother and Danny practically laughed at him because he said he had better things to do than to check out his kid brother’s theories yet Jamie knew that he was onto something so he had gone to Linda. Linda was a nurse at the same hospital where the wife had been admitted and he had wanted her to check out the EpiPen for him.

Jamie had told Linda that the husband claimed he had given his wife an EpiPen from the back of his ambulance truck because it was too expensive in stores. Yet, the fact the husband had access to the EpiPen beforehand had seemed alarming to Jamie. So he had asked Linda to check out the EpiPen to see if it was just a dud, but it hadn’t been tampered with and had simply been filled if not overly compensated with the wrong medication. And so Jamie had thought he finally had enough to take to his brother and he had been surprised when he found out that Danny was angry with him because Linda had gotten involved.

Danny had said that Linda had interrupted some match and that the case added to his workload. But Danny was willing to concede that Jamie was onto something so he told his brother he’s investigate it and that next time Jamie should get his own badge. So Jamie had said what he always says whenever someone suggest he should seek promotion – he said he was where he is and that he didn’t want anything to change yet Danny thought differently. He thought if Jamie was truly happy that he wouldn’t’ try to investigate things like he was a detective or drag Danny into it whenever he needed a real detective to make the arrest.

Yet, Danny did follow up on what Jamie and Linda found. He had looked into the husband and had checked phone records. So he found it odd that Owen’s phone was with someone else when Owen was called in to ask questions and it turned out that Owen had gotten his partner to dump the phone because it had incriminating evidence on it like an affair with the partner. And so the other woman had to answer some questions. She had been asked when the affair started, how serious things had gotten, and whether or not Owen ever mentioned leaving his wife for her so Michelle had said that Owen joked about his wife’s death.

He had said that if his wife was dead that he could be with Michelle. Though Michelle had sat on that even as she knew there was an investigation. So Danny and Baez had had a word with her before they had arrested Owen, but funnily enough Owen doesn’t remember making that joke. He said he’d never joke about his wife’s death and that he hadn’t gone to her when she had been in distress because Michelle hadn’t wanted him to answer. And Michelle had forgotten that part. She hadn’t told the cops that she had been the one that jealousy told Owen not to go to his wife and she had also forgotten the part in which she had been the one to hand the EpiPen to Owen.

Owen had said he hadn’t been the one to make sure that it had been full or that it had been fulled with the correct medication because he had trusted Michelle. But if Michelle did all those things that meant she was actually the killer. So Danny and Baez had stopped by Michelle’s to talk to her and she had tried to flee the scene though she ran into a squad car and was quickly arrested for her love rival’s murder. And all in all Jamie had been wrong. He had looked at the husband and no one else because the husband had seemed like the easy suspect and so he later talked to his brother about his prospects.

Danny still thought that Jamie should seek to get his detective badge and so he kept pushing his little brother into seeing that he does have potential. Though Jamie had heard what his brother was saying and had taken it seriously because he hadn’t thought that he was hiding. So the two men got a couple of beers afterwards and had tried to change the subjects afterwards however they were in a much better place than before and they weren’t the only ones that could say that. Frank had had an issue with his second-in-command because a journalist had implied Moore was accepting favors in exchange for what Frank could do for them.

However, all was forgiven when Moore made a public apology and announced that he would be repaying everyone out of his pocket. So Frank had decided to let bygones be bygones because Moore had follow his suggestion and was now living within his means, but trusting someone without a reasonable doubt hadn’t worked for everyone. Erin had helped an innocent she had put in prison get out because that was right thing to do and now it looks like he could genuinely hurt someone seeing as he was free.