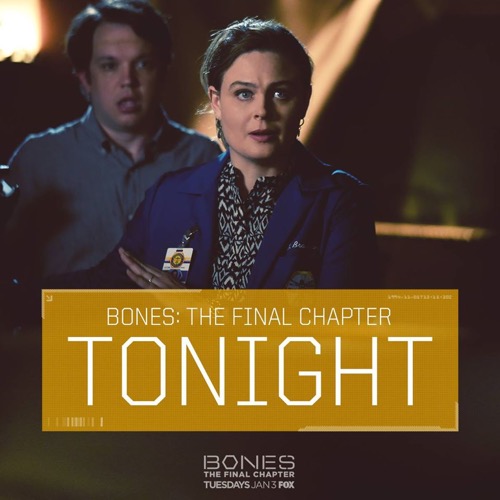 Tonight on FOX Bones airs with an all new Tuesday, January 3, season 12 premiere called, “The Final Chapter: The Hope in the Horror” and we have your Bones recap below. On tonight’s Bones season 12 premiere episode as per the FOX synopsis, “In the Season 12 premiere, the team searches for Brennan,  (Emily Deschanel) who was kidnapped by former intern Zack Addy.” (Eric Millegan)

So make sure to bookmark this spot and come back between 9PM – 10PM ET for our Bones recap.  While you wait for the recap make sure to check out all our Bones spoilers, news, photos, recaps and more, right here!

Tonight’s episode of Bones kicks off with Brennan waking up on a couch in a strange place, dazed and confused. She’s shocked when she sits up and finds herself face-to-face with Zack. He tells her in a calm and creepy voice “Please don’t attempt to stand.” She has sedatives in her system, Zack explains that she has been asleep for two hours.

Brennan warns Zack to let her go – she promises that Booth will find them. Zack has a scar on his forehead, but he won’t tell Brennan what happened to him. He scoffs that she should have visited him more.

Meanwhile, Booth’s team is working hard to try and find out where Zak has taken Brennan. Judging from security camera footage, she may still be inside the Jeffersonian. Hodgins tracks a scent from Brennan’s lotion to the elevator, and they realize that Zak must have taken her to the basement.

Booth rushes to the basement with his gun drawn – he finds Zak and Brennan. Zak is holding a syringe full of truth serum and preparing to inject himself, he swears that he didn’t kill anyone and he wants to take the truth serum to prove it.

Booth has Zak arrested and he is taken away by the police. After Zak is gone, Booth wants to take Dr. Brennan to the hospital to get checked up. She refuses to go, she wants to go see Zak ASAP and thinks he may be innocents.

Upstairs in the lab, Hodgins is upset – he can’t believe that Zak early killed Dr. Brennan. Wendell raises the point that Zak was going to inject himself with truth serum, but Hodgins doesn’t want to hear it, he is certain that Zak is guilty.

The next day, Booth and Brennan meet with Dr. Roshan at the institution to discuss how Zak could have escaped. They show Dr. Roshan surveillance photos from the last 6 months, proving that Zak has been coming and going at the facility. They learn that Zak’s scar is a mark that he received when he was in a fit of rage – he harmed himself when he learned that Dr. Sweet was dead.

Aubrey sits down with Zak in the interrogation room. Zak insists that he is innocent, and he has been reading Brennan’s emails and knew that he was a prime suspect. Zak confesses that he has been leaving the institution every night to go to the library and use the internet.

Brennan’s team pulls up Zak’s internet history off the library computers. They are shocked when they realize that Zak was using the alias “Dr. Bancroft.” He’s the mystery doctor that has been working this whole time to develop a protocol to help Hodgins walk again.

Booth is starting to have second thoughts about Zak being their killer. Aubrey thinks that he’s insane. Karen pops by the office in the knick of time, she’s going to help with the profiling on the case to see if Zak is really their man.

Meanwhile, Wendel and Bones make a shocking discovery in the lab. After scouring the bone fragments that they have to work with – it looks like there may be a fourth victim.

Karen, Aubrey, and Booth pour over the files. Karen thinks that they are working with someone with Multiple Personality Disorder. Zak could be their killer, but she thinks that Dr. Faulk is a more likely suspect.

Brennan and Wendell decide to go back to the crime scene. While Brennan is on the phone with Booth, Wendell finds a secret door and pries it open – he just found their fourth victim’s skeleton, well half of it anyway. They rush the skeleton back to the lab to get to work on it.

Meanwhile, Hodgins slips away to the precinct with Karen to talk to Zak. Hodgins gets bad news – Zak tells him that he doesn’t think the protocol he is developing is going to work after all. It looks like Hodgins may never get out of his wheel chair.

Booth and Brennan pay Dr. Faulk a visit, before they can get any information from Faulk – he calls the cops on them to have them escorted out of the building. Before they leave, Faulk gives Brennan some advice, he says that the killer they are looking for wants to be in control and he will try to get as close as possible to steer their investigation.

Karen has a plan, she want to confront Zak with his case files and thinks that it may bring out one of his other personalities.

After Karen leaves, Booth tells Audrey to call her old office in Kansas City and find out why she left and why she suddenly popped up back at the office. Aubrey gets interesting news from her former supervisor, something definitely happened, but the supervisor couldn’t comment because of “legal reasons.”

In the interrogation room, Zak confesses that he has had some blackouts and lapses in memory. Zak tells Dr. Roshan that he wants to go back to the institution and he thinks he should be placed in maximum security. After reviewing the evidence, Zak is convinced that he is the killer after all, he just doesn’t remember the murders.

Even after Zak’s confession – Booth isn’t convinced that he is guilty. Booth rants to Aubrey that his gut is telling him Zak is innocent.

Meanwhile, Karen is following Brennan around the lab and acting super creepy. Brennan recalls what Faulk told her about the killer inserting herself in the case – she thinks that Karen might be the killer.

Wendell and Brennan make a shocking realization. The fourth victim was half of a body. They realize that it was part of a conjoined twin that was surgically removed. Brennan and her team run a quick search and they realize that Dr. Roshan used to have a conjoined twin – and he is actually the killer and has been manipulating evidence to make Zak appear guilty. Brennan calls Bones ASAP and tells him that Roshan is the killer.

Back at the institution, Roshan tries to inject Roshan with a needle, but Zak knows what he is up to and tries to fight him off. Booth arrives in the nick of time and saves Zak and shoots and kills Dr. Roshan. Case solved!

The next day Booth and Brennan visit Zak at the facility. Booth believes that Zak is innocent and he promises to help prove he didn’t kill the lobbyist either.