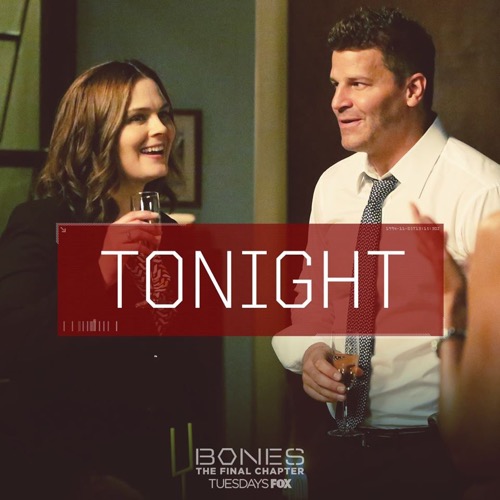 Tonight on FOX Bones airs with an all new Tuesday, January 10, season 12 episode 2 called, “The Final Chapter: The Brain in the Bot” and we have your Bones recap below. On tonight’s Bones season 12 premiere episode as per the FOX synopsis, “A body is identified as a man who helped manufacture artificial-intelligence bots, and the team wonders if his own creation had something to do with his death. Meanwhile, Brennan plans her own surprise for everyone on her 40th birthday.”

So make sure to bookmark this spot and come back between 9PM – 10PM ET for our Bones recap.  While you wait for the recap make sure to check out all our Bones spoilers, news, photos, recaps and more, right here!

Bones had listened to Zack. She was reviewing her files and attempting to figure what it is that Zack supposedly found however, a surprise party that she was throwing for herself as well as a current case had gotten in the way. Bones had said that she didn’t like surprises which was why she was throwing a party for herself and was just going to pretend that she didn’t know what was going on. But she knew and she was being the control they all loved. So Bones had sort of taken it upon herself to plan and choose everything. And her one rule for her guests was that she didn’t want gifts because she thought that would be a waste of time.

However, the one thing that Bones didn’t have control over was the case. The Jeffersonian guys had all gotten called out to the scene which unfortunately for her was nearby to a dog show that was going on. So several of the dogs that were showcasing had actual eaten parts of the victims and funnily enough that hadn’t been the worst of it. There had been this poodle that had eaten large chunks of the victim so Hodge had needed to get samples from the dog and that meant he needed everything. Samples of fur, saliva, and even teeth scraping! And so Hodge had tried to be nice by moving it along quickly for the dog’s owner though she took exception to the hair clipping.

Gaston’s mother had apparently been grooming his hair for a year to get at that length so she barged onto the crime scene and had tried to take the razor out of Hodge’s hands. Though Booth had also been so he had tried to step in and one thing happened to lead to another. Someone’s hand slipped and Hodge lost his entire right eyebrow. So Hodge with a missing eyebrow was simply too funny for everyone. They couldn’t help laughing at it when they saw him and so Hodge tried to come up with an alternative. He had used hair from his beard to construct a new and temporary eyebrow yet it wasn’t fooling anyone.

They still laughed and Bones had also laughed for a while at Hodge’s expense. Yet, Bones had later come down with a little something called the green-eyed-monster. She had gotten jealous when she heard that Daisy was going after a prestigious job as the lead forensic anthropologist at this big institution because she told the other woman that also happens to be her friend that there were plenty of other candidates that were better than her. So initially that could have been seen as Bones being her normally blunt self, but she had also down the same thing to Angela after Angela was offered the MacArthur Fellowship. The MacArthur Fellowship was the highest award in the field of science and it had been given to Angela because of her innovative work with the Angelatron.

Bones however, had said that Angela wasn’t genius and that she was simply creative. But Bones also admitted if almost reluctantly that she had never received the MacArthur and so that’s why she knows it wasn’t being handed to geniuses. So Bones was beginning to get jealous of her colleagues successes and it wasn’t a pretty look for her. She’s usually the voice of reason and would never have begrudge someone what they earned. And so everyone else saw how out of character Bones was acting long before she did. Bones on the other had just thought that everything was normal and she had actually been interested about who their victim turned out to be.

The victim was Ian Goldberg and he worked at a company called Social Cybernetics. Ian had apparently been in the business of creating artificial intelligence robots that could help children with autism and so what Ian did for a living had been pretty cool. However, the robot had been eerie. The robot was called AMI and she was quite talented. AMI could play chess, speak over eight languages, even read people’s faces in order to detect their emotions. So AMI was smart and neither Booth nor Aubrey felt truly comfortable about her existence. They thought the situation could turn into the Terminator movies at any second and they hadn’t been the only one that thought so.

There had been this rebel group who thought that any sort of artificial intelligence was wrong so they had been protesting Social Cybernetics. Though their leader Matthew Coburn had gone past mere protesting and had actually punched Ian in the face once. So Booth and Aubrey had gone to speak with Matthew and Matthew had tried running before he was inevitably yet Matthew did have some uses and he told the guys that Ian wasn’t this noble person that everyone thought he was. Ian was allegedly selling company secrets to another organization and it turns out that Matthew hadn’t been wrong when he said Ian didn’t always the noblest intentions.

Ian it seems had erased AMI’s memory on the day he died and she had malfunctioned when she had been given orders to recuperate her data. Yet, the reason Ian didn’t want anyone to know what he was doing was because he was going to sell the coding for artificial intelligence to a guy creating realistic sex dolls. So Ian had gotten involved with something seedy and the sex dolls owner had said that they were going into business together to get a lot of money, but his business partner at Social Cybernetics would have no reason to kill Ian if he was going to sell out company secrets. Ian owned a good percent of the company and he could go over his partner’s head.

But what had killed Ian was when he double crossed the man that had given him the idea to put an AI into sex dolls. The other partner had been this guy named Randy who worked at a meat packing place and so Ian had no problem with cutting Randy out of the deal he had made with the sex dolls manufacturer. So when Randy found out that he was only going to get a radio for the idea he came up with, he snapped and had killed Ian with the radio that just happens to be created from the same material used for AMI. And so robots weren’t the dangerous one. It was still humans that kept on killing each other.

So Booth had bluffed his way into getting Randy to confess and it had worked despite what Bones had thought however Bones’s surprise party had later proven to be a joint celebration. Bones had admitted that she was the one that recommended Daisy for the important job and that she had nominated Angela for the fellowship. Meaning not only did she love her friends and family, but that she also went out of her way to ensure their lives were better and both Angela and Daisy got what they had because Bones had believed in them. As for the jealousy – it had all been her ruse so that no one knew what her party was really going to be.