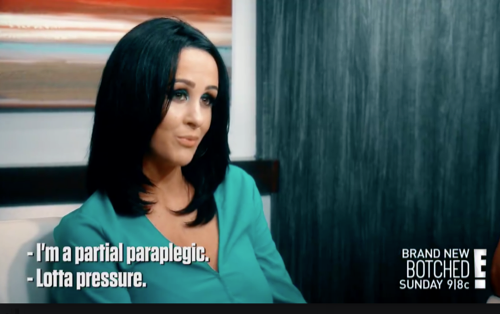 Botched continues tonight with an all new Sunday, July 16, 2017,  season 4 episode 5 called, “Twin Terrors” and we’ve got your Botched recap down below! On tonight’s season 4 episode 5 per the E! synopsis, “The docs meet a set of twins with not so identical problems. Dr. Dubrow tries to help a paraplegic fitness model achieve her dream, while Dr. Nassif performs a rhinoplasty on a woman whose nose has been altered by a cleft palate deformity.”

Liberty was a new patient for Terry and Paul and, unfortunately, she had gone to them because of complications stemming from birth.

Liberty was born with a cleft lip which was when there were openings or splits in the roof of the mouth and lip. But Liberty has also had several surgeries to correct her cleft lip beginning from when she was two months old with further surgeries just corrected whatever might have been at risk or forgotten. So the cleft lip was taken care of and she had hoped that would be the end of it however, Liberty then began experiencing problems with her nose. Her nose leaned towards one side.

The nostril they had closed up when she was a baby was still smaller than the other and so the nose leaned towards the left. However, Liberty had tried to get the problem fixed with a different plastic surgeon and initially it had looked like fine. So it wasn’t until afterward that it began to lean towards the left again and so she had tried to make her peace with it at first though the many years of getting looked at and being ridiculed did cause a significant amount of damage when she was younger.

Liberty had moved around a lot because her mother was in the military and so she faced the same thing every time she moved. Though with being a little older now, Liberty felt ready to get her nose fixed and at the same time she also wanted to fix her lip. Her upper lip was raised on one side where the original cleft was located and that made Liberty feel like she was missing a piece of her lip. So Liberty just wanted her face to be centered and Paul had said that he could do it, but he had experienced an unexpected setback during surgery.

The surgery had started out ok and everything had been fine, yet out of nowhere, her septum had simply collapsed on him. The technical term was that it destabilized except it was the same thing for Paul and it had genuinely scared him. But that didn’t mean that Paul stopped working. He continued through the setback and had straightened her nose to the best of his capabilities which meant enforcing it and ensuring that her airways were open. So Paul walked away from Liberty’s surgery feeling pretty good about it because he had been sure that he covered everything and that Liberty would leave feeling more comfortable with her nose and lip.

Yet, Paul wasn’t the only one that had a tough time like that. Terry had also experienced something similar when he began to work on Meghan. Meghan was in a car accident several years ago that had led the doctors to believe that she would be a paraplegic for the rest of her life however Megan had gone on to defy the odds and had regained partial mobility. So Megan was a proven fighter and she turned her life story around to become a partial paraplegic model. And so the one thing that Megan thought was holding her back was her chest.

She first got her breasts done after she had gotten married and had felt self-conscious about her wedding photos. However, her husband had agreed to surgery for her birthday and so she went through with the implants only there was a problem. The breasts were too high in her chest and so she had gone back to the doctor to fix them, but he had only made them bigger and there continued to be problems. Megan would later see several doctors and have nine surgeries over the course of three years to fix her chest and there were still botched.

Megan had breasts that were high in her chest though long enough to also be low at the same time and so she had gone to Terry to fix them. But Terry had had a hard time with fixing everything that had gone wrong what with the severe scarring Megan had because of her surgeries and the fact that Megan wanted to keep her breasts big. The bigger the size was the bigger risk. Terry knew that there could be further complications with the cup size that Megan wanted so he didn’t let his guard down with Megan until she was fully out of recover.

So while Megan’s case was a challenge, Terry was able to give her what she wanted and got back to her career as a model in no time. Though Paul’s situation with Liberty was a little different. He had corrected her nose and had felt proud about that yet he hadn’t been able to fully correct her lips and had been forced to settle at 80% with what he could do. So Liberty didn’t get everything she wanted, but she did walk away with everything improved and therefore ended up as one of the luckier cases.

The doctors couldn’t help everyone and this time around it had been Nadinne and Dannita Bruna. The twins were very into fitness and looking good, but Dannita had suffered right off the back with her first breasts augmentation because she developed symmastia. Symmastia was the uni-boob effect and, while Dannita tried to get it fixed, she just kept on having that problem. So Dannita had had five surgeries by time she saw Paul and Terry and Terry had told her that he couldn’t help. He said that she would need to go to a lower cup size and that was something she couldn’t do.

Dannita had said she needed the bigger size to book jobs and so she had been forced to walk away from the surgery. But her sister Nadinne on the hand had wanted to get the fat sucked from her arms because she was too big and the doctors hadn’t been able to help her as well. They had informed her that there was a lot of scarring under her arms from when she had the surgery before and so she too chose to walk away rather than risk injury. So the twins were a little disappointed however there wasn’t a lot that could take those two down. And, so no matter what, they’ll be fine.