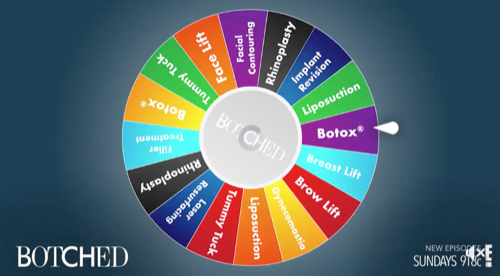 Botched continues tonight with an all new Sunday, July 23, 2017,  season 4 episode 6 called, “Twin Terrors” and we’ve got your Botched recap down below! On tonight’s season 4 episode 6 per the E! synopsis, “Dr. Nassif takes on a man with three eyebrows. Dr. Dubrow operates on a mother of three who refers to her botched breasts as “saggy baggies” and a woman wants to potentially downsize her massive money makers.”

George went to the doctors because he had three eyebrows. He had unfortunately suffered an accident when he was younger and was riding on a moped without a helmet. But he later woke up in the hospital with a nasty scar on his forehead and the scar had seemingly divided one eyebrow into two. So George hadn’t liked that. He had asked the doctors not long after his accident if there was anything they could do and he had been told that he needed to give his skin some time to heal however he went three years without doing anything and had only changed his mind recently after he had had his daughter.

George had wanted to get his scar fixed before his daughter could remember it or realize that other people looked at him differently. However, the method to fixing his scar was also going to come with some looks because Paul had thought that the best treatment for George would be tissue expanders.

He said tissue expanders would allow the skin around George’s forehead to loosen up. So the expanders were going to be into the forehead and more or less enlarge the area enough in preparation the second surgery though it was essentially going to look like two baseballs were put in and that was going to attract some unwanted attention.

Though because Paul believed it was necessary, George willing agree to the two surgeries and had gone ahead with the tissue expansion. So George had needed time to heal from the first surgery and that had allowed Paul to see another patient with Terry yet their next patient had simply been botched.

Stephanie had gotten her first breast augmentation when she was seventeen and the doctor at the time had said that she was too young for a mere boob job. And so he had told Stephanie that she had to get reconstruction which is what is normally given to women that have already a problem.

So the doctors had talked to Stephanie about it and they found out that she had simply been small which to them doesn’t count as a problem worthy of reconstruction. But Stephanie hadn’t known that when she went ahead with her first surgery and so she allowed a doctor that didn’t really know to botch her surgery.

That same doctor had put the implants in wrong and that left Stephanie with breast implants that were up high while her natural breast tissue was hanging low yet Terry had known how to fix Stephanie’s breasts. He released the pressure in her muscle which fixed ninety percent of the problems and he fixed the one ruptured implant that he found.

The ruptured implant had created something of a mess because as Terry noted it must have ruptured during implantation. Yet, Terry was able to clean the area and reshape the breast that had morphed to fit around the rupture. So Stephanie’s surgery started out as easy and then became difficult after Terry ran into that rupture however Terry did the best he could and within weeks Stephanie’s breasts were thankfully looking much better. They were even for one and was the desired size that Stephanie had always wanted so Terry started to call them perfect even as she was still in the healing phase.

George on the other hand had had a harder time. His forehead had expanded and then Paul had added a certain liquid into it that had made the forehead expand even more. Which George had found funny at first though his humor eventually wore off after people started to stare at the boobs on his forehead. So George had been ready to go when he went to Paul again and Paul went on to remove object from the area that did in fact look like implants. And so with the skin stretched thanks to those thing, Paul was able to lessen the scar and had reunited George’s eyebrow to the point where he felt comfortable again about going out.

But while George and Stephanie for that matter were healing, the doctors met Elizabeth. Elizabeth had gotten her first breast augmentation when she was twenty-five and she had thought that five hundred CCs she had gotten were too small. She said that she had recently joined the Adult Entertainment Industry at the time and that she had wanted to go bigger for her career.

So Elizabeth had taken some advice from a friend who had gotten a liquid injected into her breast that would allow it to keep growing and so Elizabeth had gone on to do the same, though as she later found out, the doctor didn’t have a license and the surgery hadn’t been FDA approved.

So Elizabeth’s illegal surgery had come at a cost. She had gotten the bigger breasts she wanted yet they one of them had been left standing while the other had been left hanging low. And so Elizabeth had gone to the doctors hoping they could fix her and all they had was bad news. They told her that they couldn’t even out the breasts and keep the same size.

Though as it turns out she was already heading towards a breast catastrophe and so Terry thought that no matter what happened she was going to be left with a complication. So Elizabeth chose not to risk surgery at all because she had still needed her large breasts to get work, but she at least knows the danger of trying to go ahead with the surgery now.

Before she was in the dark and now she knows. Yet, Stephanie and George got lucky because their surgeries weren’t as complicated and they both walked away with what they wanted.