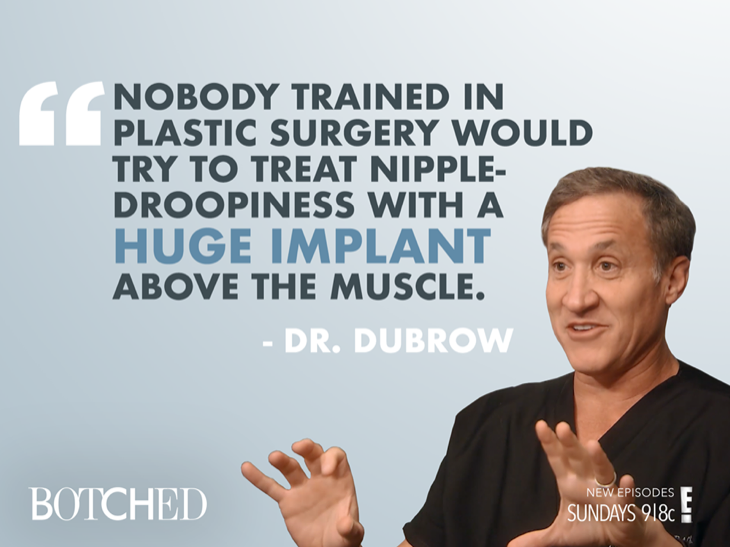 Botched continues tonight with an all new Sunday, July 30, 2017,  season 4 episode 7 called, “Lumpy Lady Lumps” and we’ve got your Botched recap down below! On tonight’s season 4 episode 7 per the E! synopsis, “Dr. Dubrow helps a fitness fanatic fix her lady lumps, while Dr. Nassif helps a house flipper close the deal on her witchy nose. Also: A house husband with a plus-size pout hopes to supersize it.”

Darlene had had multiple pregnancies and had wanted to regain the chest that she lost when she went to a doctor and he botched her.

The doctor at the time had decided to treat breast droopiness with putting in large implants that he said would pull the nipples forward. But that didn’t change the direction of the nipples and the way the doctor put them in hadn’t been well-done either. The doctor had put the implants in over the muscle and not under. So what Paul and Terry wanted to know was what kind of doctor was this? They said a plastic surgeon would have known better than to go over the muscle with such large implants however Darlene didn’t know if that doctor had been a plastic surgeon. She had more or less gone to that person because her friends went to him.

However, Darlene did go back to that doctor after her third pregnancy. She had been in a lot of pain when she breastfed her third child and had wanted to know if there was anything the doctor could do although she was wary of going through another operation. Darlene said that she didn’t fully the trust the doctor after what happened the first time and thus she ultimately decided not to go through with another surgery. So she went to Paul and Terry because she was hoping they could fix what she calls are her saggy baggies and Terry for one believed that he could.

The doctor had known going in that he needed to give Darlene a smaller chest yet neither Darlene nor her husband Marcel had wanted to go too small. The group joked around that Marcel’s hands were too big for them to go too small and so Terry had promised to see what he could do. Though he also had to warn Darlene about her surgery. He said that this type of surgery ran the risk of nipple loss which meant they could potentially die off and that there could be scarring around the nipple.

So Darlene took a minute to think about what she had learned and then she chose to continue with the surgery. She had originally gone to the doctor that first time around because she saw what breastfeeding her kids had done and so she still wanted to fix those same problems. But Terry had run across a question during the actual surgery. He had removed and replace her implants and he thought that her chest looked fine with just that yet he didn’t want to make a choice for Darlene about whether or not to go ahead with the breast lift so he asked her husband.

Marcel was in the best position to know what Darlene wants and so Terry asked him if he should the risk of adding scars to perform a lift or should close her up without performing a lift. Yet, Marcel had said that his wife would want a lift. He knew that Darlene was worried about the position of her nipples and that she would smack across the head if she ever found out that he had cost her that. So Terry went ahead with the lift and it did look better because truthfully that’s what she wanted all along. And so while Terry was watching Darlene’s case as it progressed, Paul was working on his own challenge.

Paul had to work on one of the toughest rhinoplasties he’s ever seen. His patient Belinda had gone in to see a doctor for a simple nose job and the doctor had whittled her nose down to the bone. Which wasn’t an exaggeration. Belinda’s bone was simply lying underneath the surface of some very thin skin and the doctors said it looked like the bone would eventually pop through. However, the doctor that had done that to her had said something truly awful when she went back to him to fix her nose. He said that “he was a plastic surgeon and not a miracle worker”, but it turns out that doctor wasn’t the only one that hadn’t wanted to touch her nose.

Belinda had gone on at least fifty consultations and none of them wanted to touch her nose. They usually said it was too much of a risk and so Belinda had been counting on Paul being different and he was. Paul for one said “yes” where everyone else “no”. But even Paul knew that her nose would be a challenge and so she had gone into surgery believing that rebuilding her nose would be the hard part except there were quite a few other complications as well. The patient had brittle bones and so it was hard finding a rib bone they could use though Belinda was also short on cartilage as well.

It took some time before the doctor could find cartilage in her ear to use and so all in all if it wasn’t one thing then it was another. Though Paul was able to rebuild the nose and aft wards he had asked Belinda if she was in any pain. So she told him that what hurt the most were her ribs. She had forgotten to cover her full medical history and so she told Paul about how she had fractured her ribs several years ago yet it would have been better if she said something before the surgery and so Paul got a little sarcastic about that.

Yet, in the end, both Belinda and Darlene looked good. Belinda was able to regain her confidence and feel attractive again while Darlene was finally out of pain and was able to go after her career as a fitness trainer. So both women were better off after seeing Paul and Terry, but as with every plastic surgeon, the guys did meet a plastic surgery addict. They met with Jonathan from Canada and Jonathan had wanted to make his lips bigger despite the fact that his lip already couldn’t close on their own.

So the doctors had checked the lips over and the inner part of the lips were showing signs of being dry because they were overexposed however Jonathan didn’t want that or that he couldn’t go bigger because there was a look he wanted and so he was still going to get that look even without the guys’ approval.