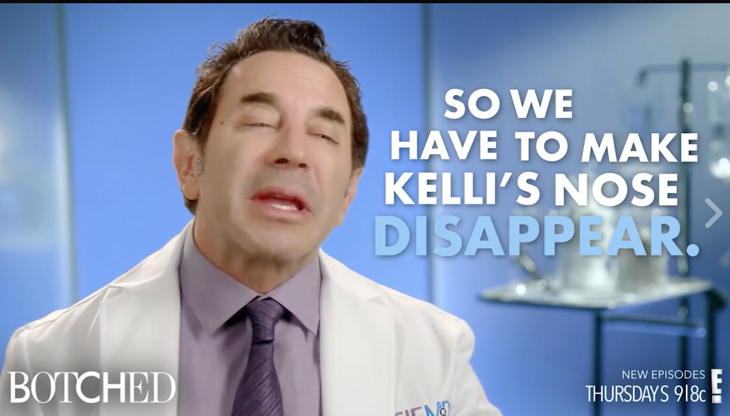 Botched continues tonight with an all new Sunday, August 10, 2017,  season 4 episode 9 called, “Meet the Future Mrs. Paul Nassif” and we’ve got your Botched recap down below! On tonight’s season 4 episode 9 per the E! synopsis, “A love-crazy Canadian uses her boobs to get to Paul, while the doctors help a former model fix her nose before her wedding, and call for back-up on a revision tummy tuck.”

Kelli was an aspiring model. That’s what she wanted to be when she was small and she had pursued it as she got older. But Kelli kept running into the same problem whenever she tried to book a job. She would be told her that her nose was too big and that she needed to get it done. So Kelli had initially been upset with all of her feedback. She hadn’t thought that there was anything wrong with her nose and had thought that she would eventually be booked without getting it done however she noticed that nothing was changing as time went by and so she gave in.

Kelli searched for a plastic surgeon and had picked on she thought would do a good job because he was listed as being one the first hundred that showed up in her search. However, that didn’t mean he was a good doctor. It just meant that he paid for the advertising fee and unfortunately Kelli didn’t know when she went to go see him. So Kelli had allowed this doctor to perform surgery on her and she noticed right away that something was off. There was cartilage sticking out and her nose never quite healed! And so the doctor had asked for a second chance.

The doctor had offered Kelli a free procedure and she had taken it. Though the doctor had been pretty cavalier with her as well her treatment that time around. The doctor chose not to put Kelli fully under so she was aware during surgery and she didn’t have any kind of care. There wasn’t a nurse or anyone in the room to talk her through it and the doctor had at one point gotten up to check on another patient. So Kelli had gotten up herself seeing as there was no one to stop her and she had used the bathroom. Where she then saw herself in the mirror

Kelli saw her skin pulled back and had been traumatized to see all that blood and gore. But she allowed the doctor to finish with the rest of the procedure because she didn’t have much choice and he had botched her. Kelli’s nose lean towards an angle and her nostrils were suddenly pointed upwards. So Kelli had to give up on her dream of modeling and she went seventeen years without fixing her nose until she met her fiancée. He had seen how unhappy she was and so he told her about Paul and Terry.

The guys were specialist and so Kelli and her fiancée thought they might be able to fix her. Yet, Kelli had been nervous because she hadn’t been sure if her nose could be fixed however Paul said that it could. He believed that he could make her nose look better if not the way it was and he had asked if she would be ok with that. So Kelli told him “yes” because she was tired of her nose holding her back and now she was simply dreaming about her wedding photos. And so Kelli put her nose in Paul’s hands as Terry saw to Kristina.

Kristina was a young mother of four and she had lost her petite frame after being unable to lose the baby weight. However, Kristina had exercised and she had dieted, but none of it seemed to be targeting the areas she felt the most insecure about. So Kristina and her husband had gone to see a doctor about a tummy tuck and the consultation had actually gone off pretty well. The doctor talked them through the procedure and had put them at ease. And then he somehow maculated how much and where he was supposed to liposuction.

The doctor had gone high up in Kristina’s back on one side and hadn’t touched the other. But the wasn’t the only complication. The doctor had also left Kristina’s love handles on and had seemingly made her look like a twisted towel by the end of the procedure. So Kristina knew something was wrong right away and the fact she felt her stomach popped after sneezing meant the doctor hadn’t done his job though he was more than just incompetent. He was also cruel.

The doctor had assured her that it was merely some swelling at first and had ignored the part when Kristina told him that she was in pain. She felt a pain in her muscles on the one side where he had lipo too high and he never once mentioned he made mistake. Instead he told her to go home and relax. Though when she came back later, he showed her a picture of before and afterwards and he tried to say “see, look how good you look”. So that had been a red flag and Kristina stopped seeing that doctor because she no longer could trust him. And so she was a loss about what to do.

Kristina didn’t want to risk another surgery right away and so she gave herself time to heal. Yet, there was still some pain and so Kristina eventually decided to deal with the problem. She went to see Terry and Paul for an consultation and the men were concerned about the pain she was mentioning. It sounded like it was coming from muscles and Terry had no idea what the doctor before him had done to cause that. So Terry offered to help as best as he could, which he said might not be a lot because he didn’t know what he was going to find, and he had brought in outside help.

Terry had called his old mentor to come in and help and together they were able to remove the love handles that had been left behind and they believed they handled the nerve problem that was giving her so much pain however they couldn’t tell for sure if they had handled the issue until she fully healed and by then Kristina said she felt like her old self. She had a flat stomach and her curves were back in all the right places. So Kristina was happy to be able to move freely around again and she was getting the chance to enjoy playing with her kids again.

Kelli’s story though was quite similar. She put her nose in Paul’s hands and he had rebuilt it for her from scratch. So the nostril problem – gone – and the insecurities it caused – gone! Kelli now has a nose that she’s proud of and she’s thankful for all that the doctors did for her. However, Paul later ran into admirer that had wanted to date him. Her name was Tahnee and she was a Canadian that hated the gap between her breasts. And so Tahnee thought going bigger would help except Terry had told her that bigger breasts weren’t going to fix the problem and a bigger butt wasn’t going to fix the back problems she was already suffering from.

Though before she left disappointed, Tahnee did get flirt with Paul and make fun of his furry chest.