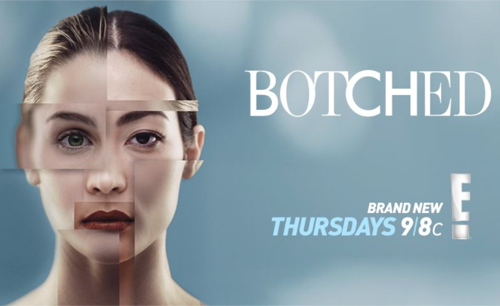 Botched continues tonight with an all new Thursday, August 2, 2017,  season 4 episode 8 called, “Sticky Nipples and Paparazzi Nightmares” and we’ve got your Botched recap down below! On tonight’s season 4 episode 8 per the E! synopsis, “A mother of two has no choice but to duct tape up her boobs; a young nurse had her nose ravaged by nasal file and a D-list celebrity wants to get an A-List nose.”

Frenchy was back! The reality star that was once turned down by Paul and Terry for further surgery was back because her good friend Phoebe needed help. Phoebe had gotten her nose down when she was a teenager and she had loved it at first however its changed over time Phoebe didn’t want her nose to hold her back anymore. She’s an aspiring actress and the paparazzi tends to follow her around. But there was a question about her nose with every picture. They wondered if she picks her nose a lot because one nostril is bigger than the other and they always asked what happened to it. So Phoebe wanted her nose fixed and the only people she thought could do the job were the guys.

Paul and Terry have a stellar reputation in their field because they fix what other people tend to break so everyone wanted to go to them for revision work. However, before they saw Phoebe, they saw Kailin. Kailin grew up wanting a big chest and so she saved up her money to get on at nineteen though unfortunately Kailin went to the wrong surgeon. She had seen an ad about a doctor that could give her boob job in fifteen minutes and she thought that was cool seeing as she would be in and out. So Kailin went with her sister to this surgeon and he had actually had her out in fifteen which was worrisome.

Kailin was thrown out the door while she was sick and vomiting everywhere yet the doctor didn’t care about her wellbeing and more than proved that point when she called him afterwards reporting a problem. She had seen that her implants were too high up in her chest and that her breast tissue was a lot lower than what she came in with. Though the doctor had said that everything was fine and had ignored Kailin right as she needed someone that knew what they were doing. So she never went back to that doctor and she instead turned to her new best friend – duct tape!

Kailin had started to duct tape her breast so that the nipple would meet the implant. But eventually it got to the point where she had a duct tape for any occasion. Kailin had camouflage duct tape, glittery pink, and she apparently wears clear duct tape when she wants to be initiate with her husband John. So the doctors had wanted to know how that worked and luckily for them Kailin had brought a picture. She lifts the breast, then tapes down the sides, and finally tapes across so it was almost like a duct tape a bra. And so the guys thought that must have hurt yet they had no idea of how much.

Kailin said that there were times when she removes the tape and wonders if a nipple was still attached to it with how it hurt so much. Yet, Kailin did it because she wanted her breast to look normal and so she was hoping Terry could fix it however Terry had had a few ideas about how he could do that. He checked Kailin and he believed that he could either just remove the implants and let her breast be or he could put in new implants as well as fix whatever it was that was making them elongated. So Kailin chose the second option. She still wanted a chest and she wasn’t afraid of the scars she would get to do the harder part of the job.

However, Terry came across a question during surgery. He wanted to know if he should do a lift as well or if he should just close her up. So he called Kailin’s husband John who was at home watching the kids and he asked John if he should do a lift, but Terry face timed John and showed him of what a lift would look like to give him context. And John didn’t have a problem with his wife not having a lift. He said that was perfectly fine with him and that Kailin should decide for herself if she wants a lift down the line. So Kailin was told about what happened after her surgery and she appeared to be fine with them.

Kailin even thought it was funny that she could test drive her breasts and see if she wants to come back for a new model. But Kailin was happy to have breast fixed and to finally say goodbye to the duct tape. So Kailin was improving as Paul was treating McKenna. McKenna was bullied in high school and the bullies would always make fun of her nose. It was on the bigger side and so a couple of girl would call her “Big Nose Bitch” though McKenna would never tell anyone about it because she didn’t want her family to know so she would just hide the evidence. And that only made her insecurities worse.

So McKenna had her nose fixed. She got her nose smaller and she had loved it at first yet it got bigger over time and she developed a hump on the side of it so she had surgery again. Though that time the doctor had simply sliced her on the side and had shaved off hump as well as some of the swelling until McKenna had her dream nose again. Except that too began developing problems over time and she eventually had cartilage making the tip of her nose look bumpy. And so those same old insecurities rose up again until she finally went to go see Paul and Terry. The guys questioned the doctor that just cut her on the side because that wasn’t how he should have done it!

Only Paul knew he could help McKenna. He thought that would just have to fix her cartilage and so he went in believing her nose would be simple when it turned out it needed to be rebuilt entirely. Paul had had to take a rib bone to rebuild McKenna’s septum and the end result had been exactly what McKenna had always wanted. She had a nose that could work and the process had fairly been easy for her despite all the extra that Paul had to do, but that wasn’t something that Phoebe could do. Phoebe had seen the doctors and she had brought along the infamous Frenchy to make experience easier. Yet, Phoebe didn’t want Paul taking anything from her ear or her rib.

She was anxious merely hearing about everything that Paul would have to do and so she had been relieved when the doctor said she didn’t need surgery because not only did she was told she didn’t have to go through a painful process, but Paul also hadn’t wasted her time or take her money knowing that surgery wasn’t in her best interest.