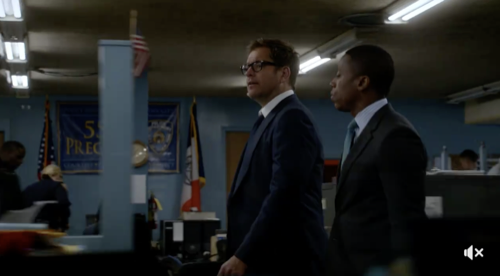 Tonight on CBS their  drama Bull inspired by Dr. Phil McGraw airs with an all-new October 10, 2017, episode and we have your Bull recap below.  On tonight’s Bull season 2 episode 3 as per the CBS synopsis, “The D.A’s office asks Bull to assist in its prosecution of a fraternity after a pledge accidentally drowns during a hazing incident, but his efforts are threatened when the students close ranks to stonewall him.”

A bunch of young guys on a pier sit under the night lights, chugging booze as frat brothers yell drink. They demand the pledges jump into the lake and cross. The next morning, a young boy finds a dead body under the dock.

Bull is in court. It clears out. The judge calls Bull over. She needs a favor. She has a friend who could use him on a difficult case. He accepts. He meets the ADA shortly after. He is the judge’s son. He has a case involving a young man by the name of Sam Whalen, who was found floating in the Hudson this morning. Bull gets right to it. He watches an officer interrogate several of the frat brothers as they discuss the night’s events. Bull points out all of the indicators that point to lies. All of the guys have the same story. Sam went back alone to get his cell phone after their partying.

The ADA and Bull meet with Sam’s mother next. She is upset and angry. She wants answers. Bull offers his working theory – the boys were drinking, Sam drowned and they all agree to say that he returned to the river later by himself. The mother doesn’t want to believe that, that would be inhuman of them all. Bull explains that people decide on a course of action and they stick to it. Bull will get her the truth.

Bull and the ADA talk after meeting with the mother. Bull explains to the ADA how he failed the mother. He didn’t offer her the comfort she needed, the answers she was looking for. There is such a thing as a good lie, Bull tells him. Bull will take on the case for the mom, but not for the ADA. He is too arrogant and too new. He suggests the ADA charge all 15 of the boys with manslaughter so that they will turn on one another from the pressure then they will get the answers they are looking for.

The ADA books all 15 per Bull’s advice. Bull arranges the media to be there. Back at the office, Benny, Cable and Bull look at the video footage they have. Bull calls for Marissa. Benny tells him that she isn’t in yet. Bull is surprised. She is always in. Cable reassures him she is just running late, but it is obvious they are hiding something.

Danny meets with the coroner to hear the results. Sam died of asphyxiation, not a quiet way to go. Someone saw it happen. Meanwhile, Chunk pays a visit to the frat house posing as a bail bond man. All of the boys have lawyered up.

Marissa comes in late. Bull questions her. He thinks she might be looking for another job. She explains that she just had a good night! Wink, wink.

Bull and Benny are walking down the street talking about what they are looking for when it comes to jury selection. Bull points out a man playing basketball whose technique is silly but working for him. He doesn’t care what he looks like as long as he gets it in. They are looking for a high threshold jury, an individual with a thankless job who doesn’t care what others think. The ADA selects who he approves based on Bull’s insights. A lawyer approaches the ADA, Bull and Benny outside of the court. The ADA offers the lawyer a deal. He will let 14 of them walk for the 1 individual who is guilty. The lawyer doesn’t take it. Bull wants to work in reverse instead. They are going to pick a guy to put the pressure on and give the others immunity. Someone will talk then.

On the stand, the ADA reminds Sam’s roommate that he can say anything. He has been granted immunity. The boy understands. The boy confesses to drinking at the event. Sam also drank. He wasn’t sure how much. The coroner said Sam’s level was a .43. The ADA wants to know how Sam could be so intoxicated, near death, but climbed out of bed and went back to the lake by himself. The boy doesn’t sway from his initial story. The ADA reminds him of the charge of perjury. He threatens him that he has footage. The boy doesn’t budge again. The judge calls up the lawyers. She is threatening to dismiss the case.

In the judge’s chamber, the judge thinks this is a colossal waste of time. Bull comes in. He asks to have one more witness take the stand. The judge agrees. Bull wants to call Sam’s mother. Bull has to talk her into taking the stand. She says she will.

Sam’s mom takes the stand and explains how Sam was an only child. He had no father so the idea of a fraternity was exciting. She breaks down talking about how she is sad that Sam died around others, others who didn’t help him.

Bull, Benny and the ADA meet with one boy and his lawyer. They tell him that several of the boys want to talk. The boy decides he wants to talk. He takes the stand and explains that he bought the alcohol, he had the megaphone, he pushed Sam into the water. They couldn’t see him in the water after awhile. They all called his name over and over but he never answered. He suggested that maybe Sam went home. They all went to bed, drunk and scared. The next morning they promised each other they wouldn’t tell anyone, their parents or their lawyers.

The judge calls the boy up. He is convicted of manslaughter. He receives 2 years in state prison. The rest of the boys receive 500 hours community service each. Bull hugs Sam’s mom outside. She thanks him for keeping his promise.

Bull heads back to the office. He calls for Marissa, but she isn’t there.