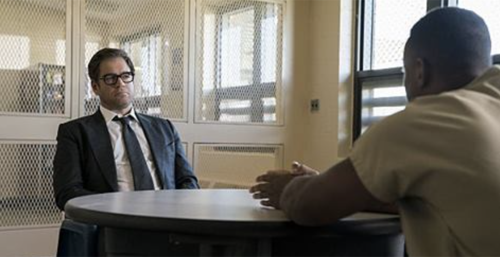 Tonight on CBS their  drama Bull inspired by Dr. Phil McGraw airs with an all-new November 21, 2017, episode and we have your Bull recap below.  On tonight’s Bull season 2 episode 9 as per the CBS synopsis, “As Thanksgiving approaches, Bull releases his team to enjoy the holiday with their families, only to find himself working a case solo when he agrees to help a boxer who is being tried for murder. Also, Chunk makes a major personal decision at his family’s Thanksgiving dinner, while Marissa’s dinner with Kyle is abruptly canceled when he is mugged.”

A boxer, Bobby “Brass” Lewis, is being taped up as his coach tells him to take a few hits. Make it look real. Bobby gets up and heads out. He sees his wife and asks her if she really wants to be there for this. She does. She asks him if he is sure he really wants to do this? They could use the $10k, he tells her.

He heads out to the ring upon the announcement. The two start fighting. Bobby takes two jabs to the face and goes down. He gets up. He is hit again. Blood flies. He grabs the ring. He delivers a left punch following it up with several more. His opponent goes down.

Hours later, Bobby pulls into the driveway with his girlfriend. They kiss. They get out of the car. He heads to the trunk for his stuff. He opens it and sees a dead bloody body. It is a neighbor. His wife sees and freaks. She calls 911 but hangs ups after he pleads with her. What are they going to do? The cops are never going to believe them.

At the office, Cable explains that she isn’t going home for Thanksgiving as everyone stands around eating pastries. They compare their amazing holiday meals with one another. Meanwhile, Bull is ordering Thanksgiving dinner in his office with his feet up. Hours later, Marissa comes into his office. She tells him that everyone is gone. Before she leaves too she needs to show him her set-up. He comes out to see 3 adjoining TV screens filled with football.

Bull steps out of the office that night. A man is out there, looking for him. He is the lawyer of Booby Lewis. He needs Bull’s help. Jury selection begins tomorrow. Bull explains that his team is gone for 6 days. The lawyer just wants Bull to meet Bobby and then go from there.

Marissa wakes in the middle of the night to the phone running. It is Kyle at the door. He was mugged. They took everything. He is supposed to go to China on business. She can help. She used to work for Homeland Security.

Bull checks into Rikers to see Bobby. Bull wants his story. Bobby explains that it doesn’t matter. He was in a gang and has priors. He found boxing and from where he left the gang and got focused. Bull makes him tell him the night’s events over and over. Bull leaves the prison and sees Bobby’s lawyer, Mr. Berry. He thinks Bobby is innocent, but he isn’t telling them something.

Bull and Berry head into court for jury selection. The judge is irritated that Berry keeps dismissing jurors on the cause. It is 2 days before Thanksgiving.

Chunk’s daughter picks him up from the airport. She has news. She got into NYU. She wants him to talk to mom, who doesn’t want her to go.

Benny is still sitting at the airport. His plane was delayed. He is sitting next to a young hot woman who has fallen asleep on him. She wakes and asks him if he wants to go get a drink. He checks her ID first and the two head off for a drink in the bar. Moments later, their flight is delayed again.

Marissa gets a thank-you text from Kyle while she gets ready to go to the airport. She calls for a car and is told all of her credit cards have been maxed out and not by her.

Day One of Bobby’s trial begins. A neighborhood woman takes the stand and lies about what occurred outside the night Bobby was arrested for murder. She details a loud fight when in fact Bobby and his wife were quiet in the driveway when they discovered the body.  Bull asks Bobby why his neighbor would lie. He excuses himself to the bathroom.

Benny is called up. They managed to get him a flight with a layover. He gives his ticket to the woman he has been spending time with.  Meanwhile, Chunk sees Bull on the news. Danny also sees. She stops by to check on Bull at the office. He confesses he is lost without them. Danny watches Bobby’s fight and notices he is hesitant to fight in the beginning but then changes and wins the fight.

Bull arrives at court to see Bobby. He accuses him of throwing the fight. Bobby doesn’t deny it. He finally breaks and tells him everything. Bull wants to settle. Bull tracks down Freddy the bookie and explains to him that they can all be winners. In the court, the charges are dropped. Bull talks to Bobby. He tells him he made Freddy see that Bobby is worth more out of prison and fighting.

Bull returns to the office to see Marissa working. He asks her how Florida was. She lies and tells him she feels like a new person.