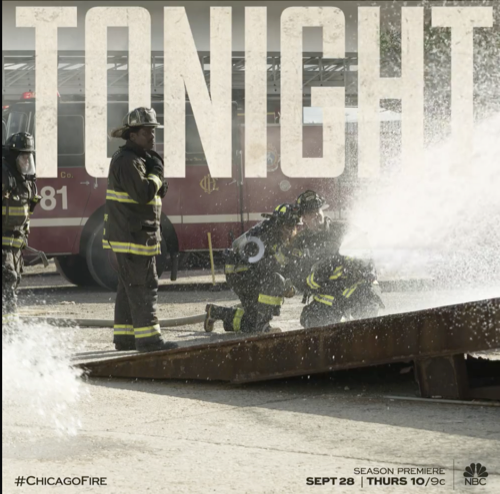 Tonight on NBC Chicago Fire returns with an all new Thursday, September 28, season 6 episode 1 called, “It Wasn’t Enough” and we have your Chicago Fire weekly recap below. On tonight’s Chicago Fire episode as per the NBC synopsis, “Season 6 opens with most of the squad still trapped inside the warehouse fire and Chief Boden making a risky last-minute decision in an effort to save them. Dawson, meanwhile, continues to deal with her father, who has new plans for himself.”

Tonight’s Chicago Fire season 6 episode 1 looks like it is going to be great and you won’t want to miss it.   While you’re waiting for our recap make sure to check out all our Chicago Fire recaps, news, spoilers & more, right here!

Christopher Herrmann (David Eigenberg) is attempting to keep Randall “Mouch” McHolland (Christian Stolte) alive while the team desperately needs to get out of the burning building. Lt. Matt Casey (Jesse Spencer) talks to his wife, EMS Gabi Dawson (Monica Raymund) telling her she is the best thing that ever happened to him and he loves her. Joe Cruz (Joe Minoso) apologizes for his harsh words towards Mouch earlier.

Gabi sheds a tear as Chief Wallace Boden (Eamonn Walker) tells Squad 3 and Truck 81 to take cover anywhere they can as they are about to open the water canons and Cruz yells he will boil them alive, but he says he doesn’t have any other choice; Gabi watches desperately as the countdown ends and Herrmann is heard screaming as he covers Mouch’s body. Once the fire is out, Cruz come in calling for Mouch and Herrmann; he finds Herrmann still doing CPR on Mouch and sees severe burns on his ears and neck. Chief quickly sees Lt. Kelly Severide (Taylor Kinney) who doesn’t have eyes on Casey. Boden finds Casey by his alarm.

Boden holds a ceremony, giving Matt Casey the medal of valor, Gabi proudly smiles on as he is saluted. After the ceremony, Gabi and Casey return home, to see her dad, Ramon Dawson (Daniel Zacapa) moving out. He thanks them for helping him get on his feet again; Gabi wants him to stay while he admits he has imposed on them for far too long. He shakes Matt’s hand and thanks him as he says he is on to his next chapter of his life. Gabi feels it was abrupt but its the first time in months they have the place to themselves and they decide to have sex in the living room.

Mouch walks to the Firehouse, goes to his locker and inside his bag is a sandwich with a note that says “Stay away from the Firehouse food, I’ll miss your love handles.” Cruz tells him its good to have him back and Brian “Otis” Zvonecek (Yuri Sardarov) jokes that its not like he saw him every day while he was laid up.

Severide notices a man who walks past him, he walks into the lunch room and calls Stella a bitch, asking her if she thinks she can talk smack about him without consequences. She tells him to be a better landlord, and he is a bully and she won’t stand for it. He threatens her to have the rent in his mailbox by Friday, or God help her. Stella tells Severide she is fine and walks off.

In Boden’s office, he tells Casey there is talk about him being a Captain one day. He informs Casey and Severide that he found a spot for Jason Kannell (Kamal Angelo Bolden) for next shift; they are interrupted by Chief’s wife, Donna (Melissa Ponzio). She needs encouragement for her new job from teaching grade 4 to highschool.

Sylvie tells everyone about her friend coming to town and wants them to party with her; the guys initially turn her down, but when her friend arrives, Cruz and Otis vie for her attention, but clearly she is distracted by Severide in the background. Mouch tries to talk to Severide about working out his core; but he is also watching Brett and her hometown friend. Cruz approaches them and give Mouch Browns’ tickets.

Gabi is excited about Casey moving up the ladder, but he said being Chief is a lot about politics and he had enough of that to last him a life time. When he walks away, Gabi’s face becomes very concerned. On the roof, Matt and Kelly are on the roof smoking cigars, when a man runs towards the Firehouse carrying his little girl, begging for their help. They slide down the ladder and call out for Sylvie and Gabi, who notice the girl’s eyes are bleeding.

Casey holds the father back who is asking if she will be blind and Gabi says they need to get her breathing first. They learn she was eating a hotdog and Sylvie is able to remove it. She begins to cough as the father is eternally grateful she is alive, and they take her by ambulance.

Later that night, Sylvie and her friend arrive at Molly’s; she continues to stare at Kelly and Sylvie warns her he isn’t the best guy, sharing how his girlfriend recently passed away. Stella overhears the conversation and walks to the back where Otis asks her to cover for him since he is doing a design class. She is unable to do so, since she has been evicted and needs to find a new place to live; Otis tells her she can sleep on the cot in the back of the bar.

Severide comes out of the bathroom and runs into Hope, Sylvie’s friend. She gives him his phone and added her number to it, encouraging him to text her any time. He smiles at her. Ramon comes to Molly’s to say “hello” and promises to keep them posted; when Matt walks away Ramon says he spoke to Chaplain Orlovsky (Gordon Clapp) and reveals Gabi hasn’t been by to see him. He says he isn’t a counselor, but maybe that moment she thought she lost Matt, created a crack and now others are forming. He doesn’t know, but if she doesn’t repair these cracks the whole foundation is going to come down and encourages her to talk to someone. She denies needing any help.

Herrmann and Brett walk into the locker room and wonder why Stella showered there and Otis opens his big mouth, revealing she was booted from her apartment for being a “bad tenant”. Severide overhears them but doesn’t say anything. Mouch asks Herrmann to hold his feet while he does sit ups, but Cruz jumps in to help. Hermmann asks Mouch in private how long he is going to make Cruz his personal slave; suggesting he tell him he forgives him and let him get on with life.

Chaplain comes to the Firehouse, looking for Gabi, she hides so she doesn’t need to speak to him. Mouch walks into the lunch room and sees a poster for Firefighter Muster; but the alarms go off and everyone is called out to the school Donna works at; Boden rushes out before everyone. Both Severide and Casey are talking to their teams about the fire and how the kids will be in a panic. Boden learns that his wife ran towards the fire that is in the chemistry lab. As they evacuate everyone, Boden is calling out for his wife and just as he sees her but there is an explosion between them.
Donna is in the corner with several students, Casey asks Boden if he is okay and he orders him to get his wife. Boden walks with Donna who sends Matt back in saying the chemistry teacher is still in the room; Casey and Severide carry the severely burned teacher out. As EMS tube her, they learn everyone is accounted for and Donna goes with the teacher in the ambulance.

Mouch says he has just got off the phone with command and has just signed up Firehouse 51 Second Shift for the Firefighter Muster – like Olympics for the firefighters; he has signed them up and he is the coach; a few of them grumble and he shouts that he needs this and no one but Herrmann knows that he came so close to walking off the job even before his heart stopped; almost giving up the second greatest thing in his life because he felt a little run down.

When he was dying in the fire all he felt was that it wasn’t enough time with them, his wife, Trudy Platt (Amy Morton) and he never wants to feel like that again. Herrmann hugs him and says that of course they will be there and Casey announces it is mandatory. Kelly is leaving work and sends Hope a message as she talks to Sylvie about her living situation and life; Sylvie is excited to go out dancing but Hope lies to her when she catches her texting, she says she is talking to her mom.

Stella comes to Severide’s door, he says she looks like a lost puppy and she was about to make a smart comment but then realizes she has no where to go. She thanks him for letting her stay there and he says he will never stop making fun of her; she says this is only for a few weeks and he should feel free to do whatever he wants with whoever. He tells her there is beer in the fridge.

Casey and Gabi are getting ready for a date, when he learns her dad got a job. He is happy but she cuts him off saying, “Don’t ever say goodbye to me again.” He admits he was meaning to say something but didn’t know how or what. She wants him to tell her right now that he will always come back to her and she will believe him. Matt takes her hands and looks into her eyes promising to always come back to her.

At the hospital, Donna gathers up the students and teachers, saying she is still critical and all they can do is wait and pray. She goes to Boden and tells him the fire was not an accident!