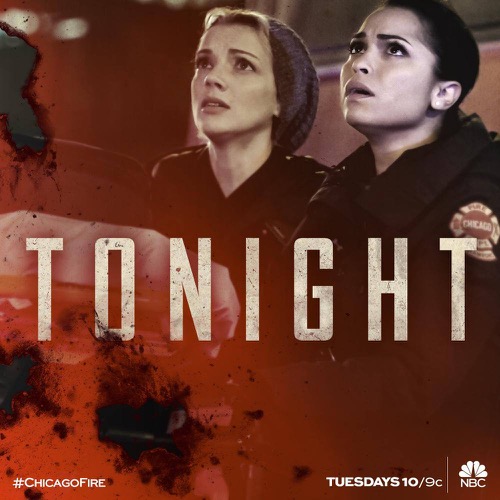 Tonight on NBC Chicago Fire returns with an all new Tuesday, February 7, season 5 episode 12 called, “An Agent of the Machine” and we have your Chicago Fire weekly recap below. On tonight’s Chicago Fire episode as per the NBC synopsis, “CPD intervenes when Casey (Jesse Spencer) and the squad are targeted by a man who has a grudge against them; a pal of Severide’s (Taylor Kinney) father shadows the squad; Brett’s relationship with Antonio hits some turbulence: his ex-wife; and Casey has a gift for Dawson. (Monica Raymund)

Tonight’s Chicago Fire season 5 episode 12 looks like it is going to be great and you won’t want to miss it.   While you’re waiting for our recap make sure to check out all our Chicago Fire recaps, news, spoilers & more, right here!

Chicago Fire begins with Gabi Dawson (Monica Raymund) and Matt Casey (Jesse Spencer) planning a date night, picking up alcohol and snacks. In the store, the man who pulled a gun on Matt in the basement fire asks Gabi what he can use for his burns. When she sees his burns he tells her it must be nice for Firehouse 51 to choose who lives or dies.

Gabi and Matt go to see her brother, Detective Antonio Dawson (Jon Seda) telling him what happened at the store. He assures them he will contact Chicago PD’s Dt. Jay Halstead (Jesse Lee Soffer) who will review the security footage. As he locks the door, Sylvie Brett (Kara Killmer) comes out of hiding; after Antonio is called to work she offers to pick up his son, Diego and bring him to the firehouse.

Kelly Severide (Taylor Kinney) comes into the locker room, learning Matt still hasn’t given Gabi her wedding ring. Severide tells him to quit stalling. Gabi and Sylvie are sent out on a call and they leave Diego with Brian “Otis” Zvonecek (Yuri Sardarov). Their call takes them to the same building the man pulled a gun on Matt, they come to the basement where the owner is lying dead on the floor.

Chicago PD arrives as Gabi is explaining the situation that happened with the man and her husband, Matt. Halstead races over and questions the woman who called 9-11; she denies knowing anything about the man living in the basement. Gabi attempts to talk to her daughter, but her mother nervously calls her away from Gabi.

At Chicago Fire house 51, Severide brings over Chief Dennis Mack (Nick Boraine), who is an old friend of his dad, Benny (Treat Williams). He is retiring in a month and is visiting cities to see if he can make his Springfield Firehouse any better. Chief Wallace Boden (Eamonn Walker) calls for everyone to come into the briefing room.

Boden informs everyone they need to be cautious as this man owns several guns, has sought out Matt and Gabi in the grocery store, and now the owner of the building is dead. He tells them to be aware of their surroundings at all times and no more freelancing on calls; they have to all stick together.

Chicago PD Dt. Halstead arrives and Boden brings Severide and Matt to his office. They learn the owner did time in prison and he probably met this man there. Matt picks Eddie Owens (Jamie Jackson) out of the photo lineup. Jay tells them he had rigged a bomb that failed but has been on the run ever since. The CPD literally have nothing on the Eddie but a few squad cars are to be outside the firehouse.

Stella Kidd (Miranda Rae Mayo) confronts Severide on his feelings about Anna (Charlotte Sullivan) going back to Springfield. She encourages him to call her, but he says he will think about it. Meanwhile Diego is playing chess with Sylvie when his mother, Laura Dawson (America Olivo) arrives to take Diego home.

Laura calls Sylvie into another room, where she lets her know she is not fine with some woman she doesn’t know around her son. She throws in Sylvie’s face about learning chess so she could spend more time with her son. She tells Sylvie to stick with what she knows and leaves with Diego.

Severide wants his crew to run some drills so Chief Mack can see them, when no one jumps at the chance to do them, Chief Mack does one and falls as he pulls the dummy. Sylvie confides in Gabi about Laura taking Diego away, and how hurt she is. She asks Gabi if it is too soon to be involved with her brother. Before Gabi can respond they are called into a meeting.

The evidence from the building fire arrives and Boden tells everyone they are looking for anything that will help the police and put their minds at ease. Randall “Mouch’ McHolland (Christian Stolte) asks how bad this guy really is and they all learn he tried to blow up a federal building with a fertilizer bomb.

Carly, the woman who called 9-11 returns to the firehouse; when Gabi runs after her. She is terrified to speak but admits she saw Eddie that morning before she found the owner. He called Carly the “chosen one” and how the firehouse chose Miranda and for him to die. He said he was going to make Firehouse 51 pay for that. The alarms go off and the crews are called out.

Gabi stops Chief Boden as they are about to leave for their call, telling him she needs to talk to him. He tells the crews about the threat Eddie has made and he officially makes the firehouse “out of service”. Stella and Christopher Hermmann (David Eigenberg) protest, so Matt says if they are still willing to go then they are going; everyone nods that they agree.

Chicago PD arrive to a house that is sealed up, but clearly someone has broken in. The CPD cannot clear the scene because of the chemicals. Matt finds a teenage victim inside, who has goggles and a mask on; he is breathing. Herrmann lifts the teen to bring him outside, but before he can leave someone runs up behind him and he knocks him out. It another teen and it appears they are just robbing the place of its copper.

Ambulance 61 returns and Antonio is there to apologize to Sylvie, but things quickly escalate and Sylvie tells him they are done because he isn’t ready. He tells her to forget everything and leaves the firehouse.

Chief Mack comes into the kitchen to grab ice and Joe Cruz (Joe Minso) gives him an ice pack. He questions Cruz about Severide and if he is leadership material. Cruz confirms they would follow him anywhere.

Chicago PD’s Jay Halstead returns to let them know the urgent care clinic where Eddie got the drugs is willing to work with them. They call Eddie to tell him there is a problem with his drugs, and if he is addicted to them, he will show up there sooner or later.

Severide comes to see Matt, who is still struggling with guilt over not getting Eddie out. Severide takes the ring from Matt saying he’s not in the right head space to be carrying it around. Chief Mack walks with Severide, telling him he deserves a promotion.

Otis plays chess with Sylvie, and mistakenly mentions Diego. He asks Sylvie if she is okay, she says chess is a stupid game, knocks over a chess piece and leaves the dining room. Boden informs everyone that Eddie is now in police custody after he went to the clinic. The entire firehouse is called out when the alarms go off.

They arrive at an empty warehouse, there is a lot of smoke but no fire, so Boden believes it is an electrical fire. Once inside, they find a couple of barrel fires burning presumably for heat. While the firefighters are inside, Boden receives an urgent call from Dt. Halstead who informs him Eddie was not the man at the clinic, it was a crackhead he paid to go in for him.

Soon the crew finds a couple of fertilizer bombs on the south side of the building. Eddie opens fire on them, focusing on Stella; saying they are just agents of the machine choosing who lives and who dies. Matt stands up and encourages him to shoot towards him.

When Boden sees the pictures of the bombs he realizes it could take out the entire block. Chief assures him, in Springfield they have specific training for this and they need to disrupt the liquid inside the barrels. They puncture the barrel and the liquid oozes out while they refill it with water from the firehose.

Matt manages to jump onto Eddie who turns on the detonator. Matt knocks him out with a tire iron. Chicago PD arrives, handcuffs Eddie to the gurney. Gabi rushes over to Matt, hugs him and scolds him; saying she doesn’t like when people shoot at him. Stella and Matt nod to each other.

At home, Matt, Gabi and Sylvie are eating dinner. Sylvie considers dying her hair pink and asks if Gabi has spoken to Antonio. She admits he hasn’t answered any of her calls. Severide arrives, telling all of them they are going to Molly’s. Sylvie goes home to get ready.

Sylvie is leaving her place and bumps into Antonio at her door. He admits he messed up and believes Sylvie deserves better than he can give her. He says he has kids and a job that will never put her first and she deserves to be first. Sylvie cries and takes his hands saying they were great together; saying maybe when things settle maybe they can check and see. He agrees and they hug goodbye.

When Severide brings in Gabi and Matt, they learn Severide and Mack planned this as their wedding reception. Herrmann says they are an inspiration to all of them and are proof that love truly can conquer all. He jokes that maybe Gabi is too stubborn to be beaten.

Matt opens the ring box and places it on her finger saying if they are together through everything they are the luckiest souls around. Gabi accepts the ring with honor and everyone cheers them as Antonio and Sylvie watch each other from the opposite sides of the bar.

Mack admits he hasn’t be honest about why he is there. There is a battalion chief position available in Springfield if he wants it. Mack confesses he is the fire commissioner there and he would like to groom him to be his replacement soon. He brings up the fact that Anna is in Springfield Med, and they would love to have him.