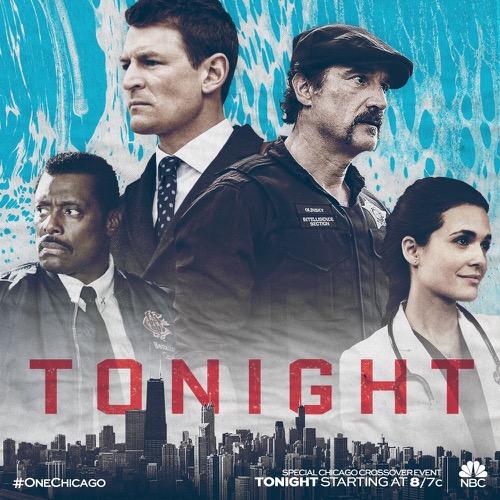 Tonight on NBC Chicago Fire returns with an all new Tuesday, March 1, season 5 episode 15 called, “Deathtrap” and we have your Chicago Fire weekly recap below. On tonight’s Chicago Fire episode as per the NBC synopsis, “A fire at an old factory-turned-living/working space traps countless people, including police detective Alvin Olinsky’s daughter; and the influx of victims from the scene tests the doctors and nurses at Chicago Med. In the aftermath, the building owner steps forward to cooperate with the investigation, but the situation takes a sudden and unexpected turn.”

Tonight’s Chicago Fire season 5 episode 14 looks like it is going to be great and you won’t want to miss it.   While you’re waiting for our recap make sure to check out all our Chicago Fire recaps, news, spoilers & more, right here!

Tonight’s episode of Chicago Fire begins with several firehouses called into an industrial area that is on the watch list; everyone expecting the worst. Lt. Matt Casey (Jesse Spencer) tells Lt. Kelly Severide (Taylor Kinney) that they are going to need every company in the city to come, as they watch teens running out of the building.

Chief Wallace Boden (Eamonn Walker) learns there are at least 50 people stuck inside; he orders 51 to get 2 lines inside to hold the fire until they evacuate and Ambulance 61 will be triage.

He says they need to save as many as they can; he wants Christopher Herrmann (David Eigenberg) to take point so Casey can stay outside and contain things inside. Teens are screaming banging on the door as Severide attempts to open the steel doors. He manages to pry it open and kids come running out, falling on top of each other.

He orders Capp (Randy Flagler) to get them to safety, and they go into the warehouse, finding victims on the floor. Severide orders Joe Cruz (Joe Minoso) to set up a search line and they separate to find victims. Otis brings out a young female, who isn’t breathing and Boden asks Otis (Yuri Sardarov) what its like inside, he said its like kindling and they will be pulling out a lot of bodies.

Herrmann and Stella Kidd (Miranda Rae Mayo) find another victim who is calling out to them. They tell her to hang on as they make a ladder for her. As Randall “Mouch” McHolland) manages to reach her, the floor collapses beneath them, Stella calls for Herrmann and Severide to help him as he is trapped under the rubble; they manage to save him.

All the firemen keeping running in and out with more and more victims. Herrmann helps Mouch out of the building, Casey says to bring him to the hospital; Mouch protests, but gives in when Casey orders it.

Chicago PD’s Dt. Alvin Olinsky (Elias Koteas) arrives and tells Boden that his daughter, Lexi is inside the building. Another explosion of flames shoots out as Olinsky cries out, “OMG!”

Boden learns that Lexi has only been living in Chicago for a few months and a couple hours ago she was here at the rave. Boden tells him to follow as they search for her. Gabi Dawson (Monica Raymund) confirms that Lexi hasn’t been through triage. Olinsky begs Boden, who says he has to get his people out because the building is going to collapse any minute.

Severide comes out, says its bad and they need another minute because there are voices in the back of the building. Olinsky begs Boden to go back in while Boden and Severide hold him back. Boden tells them they have one more minute and he rushes in with them.

At Chicago Med, Maggie (Marlyne Barrett) attempts to help Mouch, who gets off his gurney and tells them to help those who really need it and he orders Chow to get back with the ambulance to help at the fire. Mouch goes to the waiting area.

Another fireball erupts as Boden and Severide find Lexi. Olinsky doesn’t want to leave her side but Gabi tells him to let her work, he rides in the front with Sylvie Brett (Kara Killmer). The fire rages out of control, while Casey shakes his head, knowing they couldn’t save everyone.

At Chicago Med, Sharon Goodwin (S. Epatha Merkerson) arrives and says she is bringing extra staff from upstairs and asks Maggie how many nurses she needs;; she says everyone she’s got.

Goodwin tells Dr. Ethan Choi (Brian Tee) that she is coordinating him with the burn unit and if there is anything he needs to let her know. He reassures her that the lose of the burn victim last week won’t affect his work; she just reminds him to catch a breath every once in a while. Dr. Daniel Charles (Oliver Platt) is told to get more psychiatric staff ready.

Gabi arrives at the hospital with Lexi, who has 3rd degree burns and smoke inhalation. Dr. Will Halstead (Nick Gehlfuss) and Dr. Natalie Manning (Torrey DeVitto) take Lexi as their patient. She needs to be intubated, and Will removes him from the room. Manning gets the tubes in before her throat has fully swollen shut. Back at the fire site, Boden and Casey question how something like this happens, and tells them to put blankets on the bodies.

Mouch is in the waiting room when one of the teens from the fire recognizes him. They both agree they were lucky to be saved. He moves his coat and she sits beside him. She shares how she escaped, that she stepped on someone to get out and she didn’t know if they were still alive; she felt guilty that she never checked to help. Mouch assures her that none of this is on her; she didn’t start the fire. He hugs and holds her while they wait.

Dt. Kim Burgess (Marina Squerciati) finds Olinsky, who says the doctors are working on her; she was breathing when they found her. He continues to say she will be okay. Dr. Halstead informs him they put Lexi on a ventilator and sedated her for the next 24-hours. He says Lexi is in burn shock, her lungs were badly injured and they are doing everything they can for her. Olinsky goes to see her, calling her his baby and sweet girl, he kisses her forehead.

The burned warehouse has become a memorial site for those who were injured and died. Sgt Hank Voight (Jason Beghe) thanks Boden, saying the only reason Lexi is alive is because of him. Boden says its just one father looking out for another.

Commander Emma Crowley (Barbara Eve Harris) and Voight is introduced Alexa Hubble (Erin Breen) from OFI. Boden releases the scene to OFI (Office of Fire Investigation) as he stands helplessly with Casey at his side.

Back at Firehouse 51, none of the crews want to eat. Otis receives a hospital update and the death toll is up to 33. Sylvie and Gabi talk about one of their patients who was upset he got to dance with a girl in a pink dress but never got to know her name. Herrmann says they pulled out a girl in a pink dress.

Severide calls Anna (Charlotte Sullivan) leaving a message about their rough call. He refuses to go out, and returns to the site. When the owner arrives, many angrily confront him about his deathtrap; it quickly escalates and becomes violent.

Boden and Hubble question him about the building, saying the party was supposed to be a lot smaller. He admits that he allowed those kids to live in the factory instead of on the streets; Casey tells him he should have at least made the building up to code. Hubble tells him to give them a list of the tenants names.

Severide and another fire inspector, Suzy believe if could have been an electrical fire, but Severide finds a pattern and discovers what could be the cause of the fire. Gabi and Syvlie visit their patient at Chicago Med, informing him they found out the girl’s name was Kathy, but haven’t been able to locate her yet. Sylvie promises to find out what she can; and he says something good has to come out of that night.

Boden gets a message informing him that the death toll has reached 36. Hubble says its all the owner’s fault; Boden tells her to stop because he gets it. The owner asks to use the bathroom, after a minute there is a gunshot and the crew rushes in to find the owner has killed himself.

The ME remove his body while Chicago Justice’s Mark Jefferies (Carl Weathers) informs the media that even though Mr Kimble decided to take his own life, this will not slow or alter their investigation. They want to know why and how this fire happened and they will get answers. He urges the citizens to come together in this tragedy.

Dt. Erin Lindsay (Sophia Bush) wonders why no one thought to pat him down. Casey says they took him to the Firehouse for his own protection. A couple arrives and personally thanks Lt. Matt Casey and his crew for saving their daughter.

He hands him a card and says they own Kathy’s Polish deli and they would be honored if they came and ate, on them! Herrmann says he will put the word out. Gabi and Sylvie bring Kathy to see the boy who danced with her, and they share a good time. Sylvie is crying as Gabi brings her away from the room.

Boden tells Marcy, the receptionist replacing Connie, that she had one hell of a first day; she agrees but asks if he needs anything. Lt. Casey wants to see him before he goes home. Casey says they have both talked people off ledges, and can tell if they are really going to jump, so how did they miss this with Mr. Kimble? Boden says maybe he was overwhelmed and they both wished they could have stopped it.

Severide and Suzy show them evidence there was a timing device in a paper bag, filled with an oxidizer, with a light bulb filled with fuel. Someone dropped the bag, stepped on it and it the chemical reaction would start right away.

Severide is sitting, thinking in the locker room when Stella tells him there is someone to see him; it turns out to be Anna. She tells him she can’t imagine what the past 24 hours have been like and she asks if he is okay. She tells him that she had an epiphany like him, hearing about a pediatric nurse at Chicago Med. Severide grabs her and kisses her.

Lexi continues to remain in an induced coma, but Olinsky sits and reads her a story, holding her hand why Burgess smiles and watches.