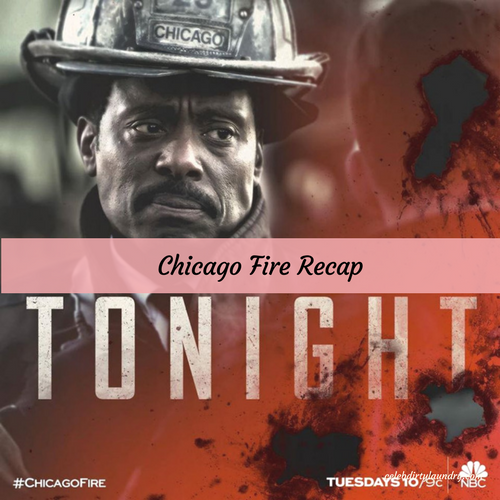 Tonight on NBC Chicago Fire returns with an all new Tuesday, April 25, season 5 episode 19 called, “Carry Their Legacy” and we have your Chicago Fire weekly recap below. On tonight’s Chicago Fire episode as per the NBC synopsis, “When the squad’s rig breaks down in the field, Casey reunites with his old friend and colleague Jason Kannell from Squad 6, whose crew gets assigned a temporary change of quarters until the rig issue is resolved. Dawson and Brett serve their time in retraining, both tackling the class in unique ways.”

Tonight’s Chicago Fire season 5 episode 19 looks like it is going to be great and you won’t want to miss it.   While you’re waiting for our recap make sure to check out all our Chicago Fire recaps, news, spoilers & more, right here!

Gabriela and Kara report to retraining due to the problem they had at the station the week before. The chief welcomes Connie back to work after her trip. Kelly calls Anna but she doesn’t answer. The team gets a call to a car accident. A man is trapped in his car and it catches on fire. They put the fire out and use the jaws of life to cut the man out of the car. The fire engine won’t start due to a bad transmission so the team calls for a back-up. Back at the fire house several of the team takes bets on how long Connie and Marcy will last working together.

Squad 6 is temporally re-assigned to work with the team. Kellie stops at the hospital looking for Anna but is told she took a leave of absence. He is shocked. Gabriela does not pay attention in class. Otis offers Marcy tips on how to get along with Connie. The team gets called to an apartment regarding a man who refuses to leave. When they arrive they find a man in-cased in concrete in a bathtub. The concrete is expanding and crushing him. They have to work fast. He is obviously mentally ill and they lose his pulse as they lift him out of the tube. He is revived and sent to the hospital.

Kelly returns to the station and tries to figure out why Anna left. Gabriela is the first to finish her test but Kara is afraid she didn’t pass. Matt and his old friend Jason from squad 6 have a drink. Kelly goes to Anna’s father’s house and she is there. She admits that her cancer is back and it is bad. Her doctors are talking about management rather than treatment. She tells him to leave.

Anna’s father comes to the station to speak to Kelly. He asks Kelly not to give up on Anna. She needs him to be there for her. Kara got a 98% on her test but can’t believe Gabriela got 100%. Marcy is extra perky and Connie is grumpy in response.

The team gets called to assist squad 6 and as they arrive there is an explosion in the tunnel. Three firefighters are dead and one hurt. Matt’s friend Jason is the only fire fighter from his squad who was not hurt. He is not taking it well. Matt offers Jason comfort but he says the accident was his fault. He wasn’t watching the gas reading and that is why his squad was in the tunnel when it exploded. Matt tells the chief what Jason said but Matt doesn’t believe it. He asks the chief to walk him through it. They agree Jason’s story doesn’t make sense.

Kelly brings Anna a picture that a patient at the hospital drew for her. She begins crying and tells him she is scared. The team signs up to help the families of the squad 6 members. Connie and Marcy start to form a bond and no one can believe it. The chief reports that the injured member of squad 6 made it through surgery and will make a full recovery. Kelly goes with Anna to her next medical appointment. Matt meets with Jason and tells him the story he told was impossible. He wants the truth. Matt thinks Jason is taking the rap to save the memory of his co-worker. Jason tells him he has to let it go.