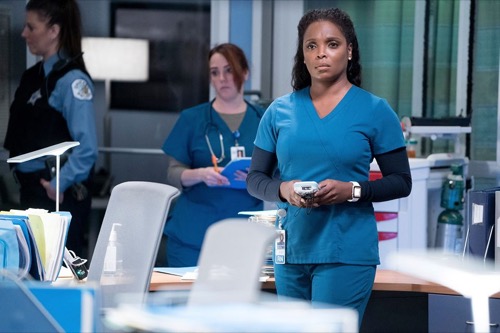 Tonight on NBC their medical drama Chicago Med airs with an all new Thursday, January 19, 2017, episode and we have your Chicago Med recap below. On tonight’s Chicago Med season 2 episode 11  as per the NBC synopsis, “A long night on the graveyard shift proves difficult for Dr. Reese. (Rachel DiPillo) Meanwhile, April (Yaya DaCosta )gets called “in to work and is pressured to slow down by Tate; Dr. Charles (Oliver Platt) passes along vital news and Dr. Rhodes (Colin Donnell) must operate on a mystery patient.

Halstead had the graveyard shift. So he was tired and more than anything he just wanted his shift to be over as fast as possible night however Manning had jinxed him. She had said “maybe it will be another easy night”. But Manning was barely out of the door when Maggie informed Halstead that a trip emergency was coming in. A triple in this case indicated that three people were injured and so Halstead had expected that all of the injured parties would have symptoms similar to each other even if the injuries had varying degrees of difficulty. And therefore Will had thought he knew what he was in for.

However, the three teenagers that came in had left him on his toes. There were two fifteen-year old boys and one girl yet it had seemed like they were all tweaking on different drugs. There was on boy that that was freaking out and claiming that he was seeing things that were not there, then there was the other boy that had been foaming at the mouth and was in danger of overdosing, and so the girl was bound to be different and she was. She was in a frozen state where she couldn’t see or hear what the doctors were trying to tell her. So neither Halstead nor Clarke knew what they were looking at because the same drug didn’t usually have different effects.

So Halstead had had to tell Clarke that only the tox screen could help them determine what they were dealing with though their lack of answers were a problem when the parents began pouring in. The kid that was showing signs of delirium had attacked a resident and delirium was looking less like the drugs had taken affect and more like the victim was suffering from kidney failure so parents wanted definitive answers. Yet, elsewhere in the hospital, Rhodes and Choi were treating a patient on the hush hush. The doctors were apparently pulled in on a very rare case involving a panda because the panda was suffering from a heart defect. And they really couldn’t turn it down.

The panda was a rare breed and there were less than two thousand left in the world. So the case pulled on the heartstrings, but it also couldn’t become common knowledge because the zoo had demanded everyone sigh non disclosures. Though a little thing like that didn’t stop Rhodes. Rhodes had been called in when he was attending a charity dinner with Robyn and so he later admitted to her what he was going to be doing. And then word had sort of spread there with every female doctor or nurse going upstairs because they had wanted to see Rhodes at work and admire him from afar.

Sharon had later broken the fangirling however the women were still enamored and everyone at the hospital had found out what was going on. But Robyn had eventually taken a break from watching Rhodes in the OR and had had a coffee with her father because she had wanted to talk. Robyn and her father have this awkward relationship where no one wants to offend the other and so Robyn had wanted to talk to her dad. Tell him about what was going on in her life and even complain about her upstairs neighbor that liked to practice the clarinet for two hours every night. So Daniel did his best to connect with her.

He told her about his and her mother’s first date being at a Van Morrison concert. Yet, it had been pretty hard for Robyn to think of her parents like that. She didn’t remember them together or the family vacations that her father tried to remind her of though she hadn’t wanted his apology either. She said she hadn’t been actually angry with him and she had more resented the fact she didn’t get to spend time with him more. So Daniel had showed her that he had always been thinking about her by showing a stone shaped a like a bunny that Robyn had found when she was four and that he had kept in his pocket ever since.

However, Daniel’s conversation to his daughter wasn’t the only good thing to come out of the night. Daniel had also talked to Dr. Latham about a new trial that could help him understand emotions and Latham had agreed to the trial in the end. So Latham was going to be getting the help he needs so that his nurses didn’t call in other doctors to give the family the bad news and he didn’t feel like they didn’t want him around, but Reese had been the one they all called to notify the family and she had finally cracked when her own patient died that night as well. And so Reese had had to make the best decision for herself afterward.

She had asked her mentor’s help to seek counseling. So the hospital had gone through a rough night. Many doctors had lost patients, April had gotten into a fight with Tate because he didn’t want her working on her feet, and even the teenagers that had been brought in hadn’t been given the best news. They had all ended up comatose and Wheeler had gotten drink during his shift just to comprehend the full loss of life. Though he wasn’t fired and other doctors weren’t even that surprised that an ER doctor had gotten drunk on duty. Halstead had told Clarke that there were more ER doctors that become alcoholics more than any other kind at the hospital. And so Clarke had called it battle fatigue because the ER guys were getting burnt out.

So the fact Clarke had been steadier on his feet had been an asset and Halstead had told the other man “well-done” once the night was over however the one patient that everyone felt happy about was the panda Su Lin who was now making a full recovery.