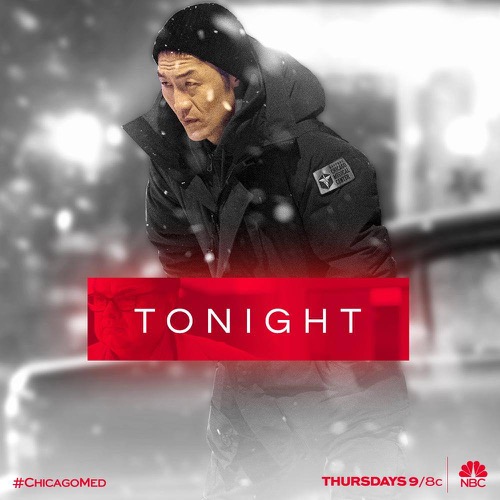 Tonight on NBC their medical drama Chicago Med airs with an all new Thursday, February 16, 2017, episode and we have your Chicago Med recap below. On tonight’s Chicago Med season 2 episode 14  as per the NBC synopsis, “A multi-vehicle accident during a blizzard puts the staffers in full scramble mode as they brace for an influx of victims. Rhodes (Colin Donnell) and Latham (Ato Essandoh) handle triage duties, difficult decisions must be made and supplies become limited. Also: A severely burned patient has one final request and an agitated patient creates drama in the waiting room.”

Lt. Matt Casey (Jesse Spencer) helps them with a family of 4 stuck in their car when one of the other 12 vehicles explodes. Dr. Choi runs to help the man who is on fire. Jeff continues to inspect the other vehicles, discovering a bleeding pregnant woman lying down the hill unconscious.

Sharon Goodwin (S. Epatha Merkerson) rounds up the nurses and doctors in the ED, informing them of the multiple traumas coming in but due to the white out conditions they have do to with the supplies and people they have.

Nurse Maggie Lockwood (Marlyne Barrett) tells Dr. Manning (Torrey DeVitto) and Dr. Halstead (Nick Gehlfuss) any patients who are stable are go back to the waiting area. She asks Dr. Wheeler to stay because they need all the hands they can get. April (Yaya DaCosta) is asked to clear hallways and supply rooms, any where they can fit a bed.

Dr. Connor Rhodes (Colin Donnell) is performing surgery when Dr. Isidore Latham (Ato Essandoh) comes in saying their patient is stable and to close him up. He informs Rhodes they are expecting an influx of trauma patients and the two of them are in charge of triage.

As the patients begin to arrive, Dr. Latham tells Dr. Choi to give his burn victim something for the pain and then he needs to move on. Dr. Rhodes protests when Dr. Latham doesn’t want to fight to revive a woman they have been doing chest compressions on for 20 minutes. Latham tells him they need to focus on those who are more likely going to survive.

The burn patient begs Choi to find his wife. Dr. Latham sees Dr. Choi trying to save his burn victim and orders him to move on. Dr. Choi tells him it is not in his job description to watch one of his patients die. Choi says he is talking and not in pain but Latham says its because he is burned over 90% of his body and his organs will begin to shut down and he will die and treating him takes away supplies for patients that have a chance to survive.

The pregnant woman finally arrives making her their number 1 priority. She has minor cuts and the baby’s heartbeat is strong. The woman and young boy arrive and put into rooms. Dr. Halstead talks to his young patient as he screams in pain; they tie a sheet around his pelvis as he orders tests.

In the next room, Rhodes cannot find a pulse on the other young boy’s leg, they push pain medications and snap his leg back into place. Rhodes says he needs surgery as soon as they can get an OR. Dr. Manning tells him he was so brave.

The alarms go off in the pregnant woman’s room, where she is hemorrhaging both vaginally and through her IV. Dr. Rhodes informs everyone they have 4 minutes to deliver this baby or they are going to lose both.

Rhodes performs an emergency c-section right in the room. Jeff packs her abdomen and Rhodes helps the baby breath, then April takes her up to the NICU. They shock her twice and her heart starts again. Rhodes orders for the blood bank to send them more blood.

Dr. Choi comes to see his burn patient, Mr. Winter telling him he is in burn shock and his organs will shut down soon. He asks if he is dying and begs him to keep him alive until his wife gets there, so he can say goodbye. Choi says he needs to intubate him and when his wife gets there he will remove the tube so he can talk.

As the woman who just gave birth is sent up to the OR, one of the nurses is shaken by everything he just saw. Maggie brings Dr. Daniel Charles (Oliver Platt) to the OR where they have an irate patient demanding a Xanax refill. Dr. Charles offer to speak to him, but just as he is complaining no one cares about him, Dr. Sarah Reese (Rachel DiPillo) tells him he is needed in the psych ward because a patient attacked a nurse.

Dr. Reese is asked by Goodwin to stay in the ED and help them there. Dr. Manning passed Dr. Halstead’s room where he is helping his patient. Manning’s young patient needs to have the blood in both his broken legs transfused. He is stabilized but when Manning orders 2 units of O-negative, Halstead informs her he needs 2 units for his cousin in the next room too. Maggie tells them they need to talk to Goodwin about it.

Goodwin tells them they are almost completely out of O-neg so they need to choose who they are going to treat. Halstead accuses Manning of being emotional because it is clear his patient needs the blood more. Dr. Rhodes says Dr. Halstead’s patient needs it more urgently but Dr. Latham says again they need to give it to who is more likely to survive; which means Manning’s patient gets the blood.

The four doctors and Goodwin go to see their patient, informing her that she needs to decide who gets the blood, her son or her nephew. Dr. Rhodes says her nephew has the greater chance of survival; she says she cannot do this and agrees to Goodwin’s suggestion that they make the choice on her behalf. Dr. Charles returns to the ED and finds Mr. Kellogg is gone.

The mother goes to see her son after seeing her nephew getting better. Dr. Choi continues to encourage his patient to hang on as they have located his wife and she is trying to get there. Choi and Rhodes argue over keeping his patient alive until his wife gets there. He just wants him to get his dying wish. Rhodes says he is sorry and he will take the patient off the ventilator himself.

Choi goes to see his patient and tells him he has to take him off the ventilator since the hospital is in an emergency situation. He offers to keep him breathing until his wife gets there, bagging him and helping him breath. When Dr. Rhodes informs Dr. Latham about what he told Dr. Choi, he gets no reaction so he asks if he feels anything at all.

Jason, the nurse who was deeply affected by the trauma with the pregnant patient asks Dr. Reese if she can prescribe him something to take the edge off, she refuses saying she needs to speak to Dr. Charles about it. He tells her to forget about it.

Dr. Charles receives a call from Mr. Kellogg’s brother who informs him that he shot and killed himself. Dr. Charles walks away very emotional.

Blake comes out of surgery, and asks his wife about the boys. Halstead steps in saying they are both in the hospital receiving treatment. Josh broke his legs and Benjamin has a pelvic fracture. Dr. Manning informs him that both boys needed blood transfusions, but the hospital had a shortage and they only had blood for one.

He learns the blood was given to his nephew Josh instead of his son, Benny. He is furious with his wife for not stopping this, asking her what kind of mother she is that she would be willing to let their son die. Dr. Manning tells Goodwin that if Benjamin doesn’t get blood soon he isn’t going to make it.

Dr. Reese finds Dr. Charles who says these kind of things happen, and they have no way of knowing when this will happen. She admits she is concerned given his history, she walks away as he appears upset. Dr. Halstead comes to the blood bank to donate right away and sees Dr. Manning is already there.

Dr. Choi refuses to help Dr. Rhodes because his patient just needs a little more time. He reaches up and grabs Dr. Choi’s to stop the with the bag, he removes the bag and tells him how sorry he is; with tears in his eyes he announces his death.

Dr. Choi finishes with another patient and sees a nurse cover his body with a blanket. Choi hears that there is universal blood available so what is taking the hospital so long. Goodwin says they need to follow hospital policy and wait for the screening.

Choi says he is O-negative and routinely checked through the military, Goodwin isn’t sure that would be okay. She agrees to connect him directly to the patient to save Benjamin’s life.

Dr. Reese is called up to psych, where she finds Mr. Kellogg sitting in a hospital bed watching TV; he told security he was Dr. Charles patient. He admits he made the call. Dr. Charles comes and tells him he is so grateful he is still alive and now he can treat you. Dr. Charles berates him and he wants to leave; but he is informed he is being placed on a 72-hour psych hold saying he wanted his attention and now he has it.

Everyone watches as Benjamin’s BP starts to go up and his heart rate goes down. Halstead tells his mother they will be able to get him up to radiation soon. Manning says they were the ones who chose who got the blood but that didn’t mean they ever gave up on him. She blames herself.

Rod Winters’ wife arrives and Dr. Rhodes says he will talk to her about her burned husband. Halstead apologizes to Manning for calling her emotional, admitting there are very few people he canre about. They say good night as Dr. Choi watches the blood donations arrive. Reese tells him she was glad to be back in the ED to help fix bodies, but fixing minds is rough.

Dr. Charles sits with Mr. Kellogg and they talk as the new mother finally gets to meet her baby, as April cradles her own belly. Choi is still angry as he watches Rod’s wife cry over his body. Jason looks at Dr. Rhodes and walks away. Dr. Latham stands at the ED doors watching the snow; Dr. Rhodes admits he envied him today for making clinical decisions with no emotion; saying he envied his autism a little bit.