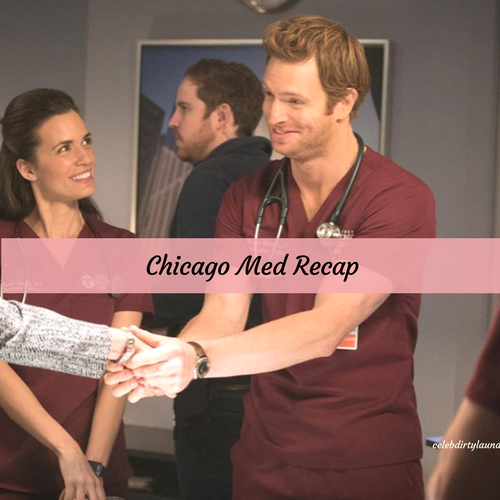 Tonight on NBC their medical drama Chicago Med airs with an all new Thursday, March 30, 2017, episode and we have your Chicago Med recap below. On tonight’s Chicago Med season 2 episode 18  as per the NBC synopsis, “Will fights to save his former teacher, who faces a life-threatening disease. Also, Dr. Rhodes (Colin Donnell) clashes with the father of a young patient regarding a risky procedure; an unusual case involves a pilot; and Maggie aggressively trains a new nurse.”

A patient with Alzheimer’s became personal for Dr. Halstead. He had unfortunately known the patient beforehand because she had been his teacher during med school as well as his mentor and he had known about her condition. But Halstead had been told that she was getting proper care at her nursing home and so he couldn’t understand why they missed her illness. Dr. Bella Rowen had an aggressive form of pneumonia and it would have been identified easily if anyone had just paid attention to her breathing. So Halstead became angry. He thought the nursing home were criminals and he blamed himself for only visiting Dr. Bella Rowen once month.

However, Halstead’s personal feelings were blinding him and he didn’t step away from the case when he should have. So Halstead kept going over Rowen’s case and looking for anything that could help though his friends could see that their friend was hurting. It took a toll on him every time Rowen forget his name or where she was and he tried ignoring all that because he still believed that the same woman that taught him everything was in there. And that woman was unfortunately, fading every day so Halstead’s friends tried to keep an eye on him. They offered their support if he needed it and they too had wanted what was best for Rowen.

So it was difficult on them when Halstead crossed the line. He took extreme measures to keep Rowen alive and those that knew her like Sharon had known that Rowen wouldn’t have wanted to be incubated. Though no one had been able to talk Halstead out of his decision. He felt that if she was alive that he could still save her. He ignored everyone else’s warnings and Sharon hated seeing her friend like that and she grieved for her. And so Sharon talked to Maggie about the incredible woman and teacher that Bella Rowen had been. Rowen, for example, kept Sharon from losing it and credited her with her becoming a nurse.

Sharon had apparently been a wreck when she first got started in nursing and she didn’t know what end was up. Yet, Rowen had stepped in because she hadn’t wanted to give up on Sharon and she had helped her regain some of her confidence back. So in a way, Rowen’s situation was a lot like Maggie’s. Maggie was supposed to show a young nurse around and help teach her what she needed to know, but she had gotten frustrated when Monique kept making the smallest mistakes and Maggie eventually walked out on Monique’s training course. She wanted to write off the young woman when a good teacher is not supposed to do that.

So hearing what happened during Sharon’s time had taught Maggie that she should at least still try with Monique. Monique was still learning and so there was no reason to be so hard on her or allow a fellow nurse to insult her when she made a mistake. And so Maggie stood up for Monique because she said – she’ll get there. But Sharon had had to talk to Halstead as well. She found out that he wanted to put Rowen on dialysis and she knew for a fact that wasn’t fair after everything he had done to Rowen.

Halstead had broken Rowen’s ribs when he performed CPR on her and then he had confined the poor woman with incubation tubes that he shouldn’t have performed. However, a dialysis would ensure that Rowen would live the rest of her life with complications like bed sores and the possibility of infection. So Sharon told Halstead that enough was enough because nothing was going to bring back the woman they knew and they shouldn’t force her into living. Rhodes had a young patient who had a controlling father and he had hadn’t told the father about a dangerous surgery.

Rhode’s reasoning had been that the father would pick the dangerous surgery as long as he got a healthy son that might play sports one day. Though Rhodes didn’t have a right to make a decision for the child without his father’s consent and truthfully the father did care about his son. He just thought he’d understand better if they could bond over something. So Rhodes later changed his mind because he knew that his patient needed all the facts and not just the ones he deemed worth telling. And therefore, Rhodes decided to fight for his patient’s arm rather than giving up on it yet his new decision did drive him to take risk.

Rhodes later continued with a surgery even as everyone else in the OR told him to give up and he refused to stop until he completed the surgery. So Rhodes had chosen the best course for his patient and he had stuck to it, but it had been harder on Halstead when he took Sharon’s advice. He knew that he wasn’t giving Rowen any kind of life and so he decided to let her go. Yet, he hadn’t been alone when the time came. He had Sharon with him and Sharon understood the pain he was going through.

And afterwards, Halstead cried in Manning’s arms and not Shore’s like Shore wanted.