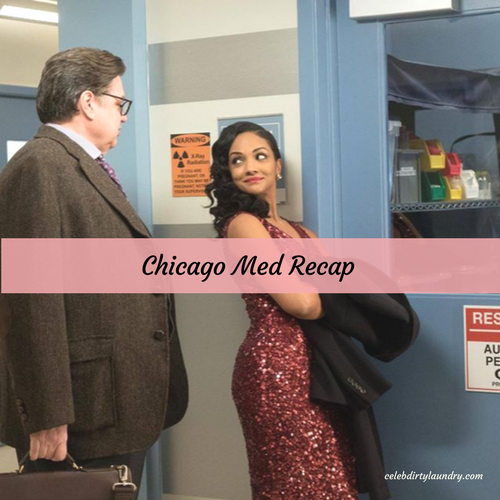 Tonight on NBC their medical drama Chicago Med airs with an all new Thursday, April 13, 2017, episode and we have your Chicago Med recap below. On tonight’s Chicago Med season 2 episode 20 as per the NBC synopsis, “Family matters unfold for the doctors. Here, Dr. Halstead’s father is admitted to the hospital; Dr. Rhodes (Colin Donnell) reflects on his relationship with his father; Robin’s odd behavior intensifies; Dr. Manning feels the impact of being a working mother.”

A teenager came into the ER with some serious bruises. He had apparently gotten beaten up at school and whoever got to him had done a number however Elliott Gallagher had talked to the doctors and he had said that he didn’t blame them. The “them” being the people that beat him up. But while that was an unusual thing to say, what he said next had had Choi and April confused seeing as they normally didn’t get teenage boys that wanted them to castrate them. So something was going on and it was something that a an ER doctor and nurse couldn’t handle. And so they called in Daniel.

Daniel was the therapist and he had supposedly seen everything. However, Elliott’s case had been different. Elliott had explained that he gets these urges and that he tries to suppress them because sex in his eyes were only meant for procreation yet suppressing his urges had made Elliott aggressively act out towards the opposite sex. He has admitted that he stalks them and that he had cut off a piece of a girl’s hair without her knowledge because he thought her blonde locks were beautiful. So Daniel had thought about everything Elliott said and he believed the best course of action would be the drugs.

Daniel later told Choi that Elliott could do with therapy though the chemical castration that the drugs would give him would also be of a help until Elliott’s urges were controlled. Yet, Choi had been concerned about what Daniel had told him. He had wondered if Elliott could be psychopath and if he would act more aggressively in the future. So he had talked about it with Daniel and Daniel assured him that he didn’t believe Elliott lacked emotion. He said that Elliott was capable of feeling regret and that he was genuinely ashamed of his own thought as well as his actions. And so Daniel thought Elliott’s case would actually be easier than whatever was going on with his daughter.

Daniel’s daughter Robyn believed she was hearing critters in the wall at her place and so she had called in an exterminator, but the exterminator didn’t find anything and Robyn’s boyfriend Rhodes had thought that she was just imagining the sound. Though Robyn swore that she was hearing something in the walls and she had wanted to get another exterminator just to prove that the critters were there. So Daniel had watched his daughter and he had seen her act out of character. Like the way she was talking to herself by the vending machines and how she had seemed dazed when he had tried to talk to her.

But Robyn had said that she was fine. She believed the critters were truly in the walls at her home and she didn’t seem intent on listening to anyone else about what they had to say on the matter. So Daniel had tried to ignore what was happening with her and he had gone about speaking to Elliott’s parents about treatment for the teenager however Elliott’s parents didn’t believe there was anything wrong with their son and they definitely didn’t want to castrate him because they thought that what he was going through was normal. And so they too had tried to ignore the signs with their child.

Except ignoring the problem doesn’t make it go away. There was still something off about how Elliott was treating his own sexuality and the only one that heard anything in the walls were Robyn. However, Rhoades had tried talking to Robyn. He told her that they had checked it out and that there was simply nothing there yet she didn’t want to take his word on the matter and had even gotten into a heated argument with him over it. So Rhoades tried to be there for someone else. Halstead had had a hard time convincing his father that he was sick so having Rhoades as backup had helped him.

It had gotten Halstead’s father to check into the hospital and agree to hearing his options. Yet, the old man didn’t want to have surgery even though he was suffering a leaky valve and had a heart that was working overtime to keep him alive. So Rhoades’s hands were tied. He had given his patient all the options and his patient had turned down what was sensible. And so the only person that could convince the old man to have surgery was his sons. Which was what Rhoades told Halstead and his brother!

Unfortunately, though, both sons had a rather complicated relationship with their father. Their father believed that Halstead should have gone to work right out of high school like a real man and so his father had believed he was a disappointment when he decided instead to go to college. So Halstead didn’t want to bother with his father half the time because he knew that his dad wouldn’t listen. But later on the father had had a hard time breathing and Rhoades had been forced to operate just to keep the elder Halstead man alive.

Though before he went ahead with the surgery, Rhoades had tried talking to Daniel. He had told the other man that he was concerned about Robyn and that she was drifting off into space than normal. So Daniel tried coming up with excuses for his daughter and he had fobbed off Rhoades who had grown frustrated with him however he later checked in on Robyn and had tried to get her talking. She was behaving agitated and often lost her train of thought. And so Daniel had tried to evaluate her and she had caught on.

Robyn had seen what her father was doing and had lashed out at him for him. She said that he never once had a conversation with her in which he wasn’t trying to asses her mental well-being. So she had stormed off because she was so angry and that had put Daniel he didn’t want to be in. However, Daniel later had bigger problems when Elliott went off the rails. The teenager had gone into another patient’s room and had been found standing over her. And so Choi had asked him what he was doing and Elliott had tried to say that he just wanted to help the blonde teenager with her blanket because she seemed cold yet they both knew that was a lie so Elliott then took matters into his own hands.

Elliott went into the bathroom and had used a pair of scissors to cut off his genitals. Yet, Choi had been quickly on the scene and so the doctors believed that they could fully attach it, but what happened with Elliott had been the warning sign that his parents needed. So they had later asked Daniel what it they did because they wanted to know if they did something that made Elliott the way he was. And Daniel’s advice to them had been not to look bad. He said that no good would come of it and that now they had to focus on Elliott getting better.

So Daniel went to his daughter’s office and he talked her into seeing someone just for their peace of mind if nothing else. But, elsewhere in the hospital, Halstead had made things up with his father and at the same time had gotten into trouble with Shore. Shore had found out his father was in the hospital because Natalie told her and not him. So she was pretty angry about that and it was awkward between them as they went home though surprisingly Natalie hadn’t picked on any tension and so she didn’t know she was at the root of their argument as she was face-timing son from the hospital.

And on tonight’s episode, another teenager was given the assignment of looking after a doll like it was a real baby and had chosen to hack it with her computer rather than do the work. So she got into a little trouble Reese.