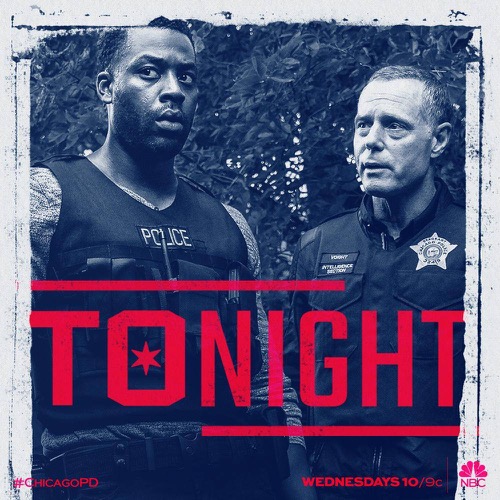 Tonight on NBC their drama Chicago PD returns with an all-new Wednesday, October 18, 2017, season 5 episode 4 called, “Snitch,” and we have your Chicago PD recap below. On tonight’s Chicago PD episode as per the NBC synopsis, “While investigating a drug-related homicide, Intelligence is stonewalled by the “no snitch” culture of the neighborhood. Meanwhile, the police’s own code of silence is put to the test.”

Kurtis orders them to put their cell phones in the basket as Atwater sits at the bar. Rusek reveals Eddie’s cut is 3 grand, when they say they met at the “ballet”, Kurtis and his guard walk out. Rusek and Atwater swear they didn’t break cover, so Rusek goes to meet Eddie, telling Olinsky that Kurtis is different because he likes killing as much as he likes dealing.

Rusek arrives at Eddie’s place, realizes something is wrong, calling Kevin to come to the front as Rusek follows a trail of blood outside, finding Eddie. He reveals he is a real cop but when he asks if it was Kurtis, Eddie says he is not going out like a snitch, draws his last breath and dies.

As CPD removes Eddie’s body, Kevin informs them he was shot twice in the chest with a 9MM, they didn’t find the gun and Rusek insists it was Kurtis. Rusek is upset that Eddie died because he got made; Kevin says this isn’t on him because he didn’t pull the trigger. Hailey Upton (Tracy Spiridakos) and Jay Halstead (Jesse Lee Soffer) go door-to-door but learn nothing because everyone acts like they don’t know anything, saying it’s not their job to help the police.

Rusek says this whole “snitch” thing is getting worse and worse. Burgess shows them what the camera caught in the area; Rusek is certain it is Kurtis but Voight says you can’t see his face but it is enough for Burgess and Antonio Dawson (Jon Seda) to go pay Kurtis a visit. Rusek reveals there were bloody footprints going out the front door, Voight suggests there could be two shooters. He sends Upton and Olinsky to the restaurant to find out what spooked the guys.

Upton and Olinsky come to talk to the restaurant owner about Kurtis and Andre Walker (Clifford McGhee), he only talks about food while Olinsky goes to the bathroom. Olinsky reveals to the Intelligence Unit that he found counter surveillance device in the restaurant, which probably revealed to Kurtis about Rusek’s wire, making them assume Eddie was a snitch. Halstead shares that the fingerprint found at Eddie’s belong to Roland Garrett and Voight orders them to track him down; when they find him, he tells them Eddie is his brother.

Voight interrogates Roland, saying he either saw who did it or did it himself. Kevin Atwater comes in because they know each other. Roland struggles, then admit he was there and some guy shows up, knocking at the back door but he was in the kitchen and didn’t see him. Voight tells him they have his footprint in the blood which means he was near Eddie’s body.

He confesses that he saw Eddie was shot and crawling towards the front door but he got scared and ran out the front door. He says he did call 9-11 but Voight wants to know why he didn’t help save his brother’s life. Roland says his brother is gone and he still has to live there, he says the police know how it is but Kevin tells him he is on his side and will help him. Roland says he isn’t a hero, just another brother trying to pay his rent, have a little fun and stay above ground.

Upton interrupts Halstead and Rusek saying they have a video of a man who looks like Kurtis hoping into a vehicle two blocks from Eddie’s house. Voight asks if she ran the plates and she says they belong to the girlfriend of Andre Walker and mother of his 3 children. Rusek and Upton show Andre the warrant as his girlfriend is upset they are taking her car; Andre tells her to keep the kids away from the police harassment.

Rusek says Eddie has no idea he was a cop, Andre says him and Kurtis liked Eddie and feel really bad that Rusek got his ass popped. Upton says that sounds like a confession; Andre says he didn’t kill anybody but snitches like Eddie get killed real fast. Upton tells Rusek they should go, but Rusek promises to see him real soon.

Back at the precinct, Voight tells Rusek that knowing Kurtis did it and proving it are two different things saying they need to find something. Voight tells Rusek to let it go because Eddie was in the game and knew the risks. Kevin comes in, revealing Andre’s girlfriend, Mia is dealing dope out of an unlicensed beauty salon and has 2 priors. Voight says that is something and tells him to take Burgess and Upton.

The CPD raids the beauty salon with their warrant, as they take her away, Kurtis is outside telling her to keep her mouth shut, sit tight and ask for a lawyer. He shouts at the police that this is harassment. Upton and Rusek come out, saying it is not their fault she runs a salon without a license and sells blow in her spare time. Rusek says the problem is she has two priors and with this new charge, she is going away, a 3-time loser unless he has something to tell them that will inspire them to drop the case.

Kurtis says he was honestly getting tired of Mia anyways, when Upton says that’s one hell of a way to talk about the mother of your children, he calls her a bitch and Rusek punches him, saying he will take off his badge and deal with it. Upton shoves him telling him not to do that in front of her and orders him to get in the car.

Rusek says Andre won’t flip, he didn’t even flinch. Antonio leaves telling Voight he has parent teacher interviews in the morning. Rusek is arguing with Kevin when Voight tells him to stop; he doesn’t care what is right, all he cares about is making the case; he tells them to talk to Roland offering him witness protection. Kevin looks at his phone and says they may have to come up with another plan as he learns Roland was just shot and killed at the store.

Halstead tells them a witness saw someone running and throwing something in the dumpster. Rusek and Kevin are told to go talk to people, outside in the crowd, Rusek sees Kevin’s brother, Jordan (Kylen Davis) standing there. Kevin grabs him, Jordan sees them carry out Roland’s body and reveals a local dope dealer killed him because he saw something he shouldn’t have.

Voight explains to ADA Anna Valdez (Monica Barbaro) what is happening with the case. She knows Kurtis is the shooter while Andre drove the getaway car but they still don’t have enough to move forward. When Anna walks away, Voight discovers Antonio talking to someone with Virginia license plates, he takes a picture of the man’s car.

At the precinct, Antonio is back and Voight asks him how the conference went that morning with the teachers and Antonio lies. Voight calls Rusek into the office, informing him that someone filed a beef about him punching Andre. He orders Rusek to stop talking and tells him what to say and tells him to deal with Upton. Rusek comes to see Upton in toe change room, she says she will have to think about lying for him; he tells her to do what she has to do.

The IU is watching a video from Roland’s shooting, they are sure it is Kurtis but again it only looks like a skinny black male. On the video, they see another person there and all they can see is the sneaker – it’s the same ones Kevin just gave to his brother for his birthday.

Kevin talks to Jordan, asking to show him photos to identify the guy; Jordan says people hate snitches and he could end up dead even if Kevin helps him. Jordan asks him what he wants him to do; Kevin says he will help put away a bad man who killed a good person. He wants Jordan to be able to look into the mirror for the rest of his life and know he did a good thing.

Anna comes to meet Jordan. He reveals he heard gunshots and saw a man run out and toss a gun into the dumpster. Voight looks at Kevin, asking him if he is sure about all this; Kevin says no, but it’s the right thing to do. Voight tells him what is right is to do what is best for him and his family. Anna shows Jordan pictures, he looks at Kevin and confirms Kurtis’ photo. Voight says he is proud of him as Anna tells them to get him as she prepares the warrant.

CPD arrives and gunfire erupts, they give chase. Kevin orders him to stop as Voight chases him with the car. Kevin has him cornered, orders him to pick up the gun. Voight runs up behind him whispering that Kurtis might have another weapon on his ankle and to be careful. Voight promises he has him but tells him to stand down as Upton and Antonio arrive and arrest him. Voight puts his arm around Kevin’s shoulder and tells him to come.

Voight meets with Denny Woods (Mykelti Williamson) who informs him the witness back down against Rusek. Denny tells him it’s always better to be upfront when it is a conversation between friends before it gets formal and more contentious; Voight acts like he knows nothing. He tells him, “If you aim at the king, you better make damn sure you kill his ass.” Voight says he is familiar with that saying but says he never took aim at Denny even though he thinks he did.

At Molly’s, the IU toasted Eddie Greene and Roland and even Jordan for being so brave. Upton says it is not the time but Rusek wants to know. Jay advises Rusek to let it go but he wants to know. Upton tells him, she took care of it and the case went away; she found the witness and she recanted but says she didn’t do it for him.

Olinsky meets with Voight, saying he ran the plate of the man who met with Antonio. He is a State’s attorney named Nathan Potter and the word is it’s not over his pal Denny Woods. Olinsky wonders about Antonio and Voight confirms he lied to him about the meeting. Voight says he knows they are coming after them from all sides. Olinsky agrees.

Kevin is eating with his siblings, when he notices a black SUV driving past the restaurant, he doesn’t scare them, saying he will be at Jordan’s game. The man walks in and reaches into his pocket; Kevin reaches for his gun. He jumps when there is a loud sound behind him and his siblings make fun of him being jumpy but he promises he is good!