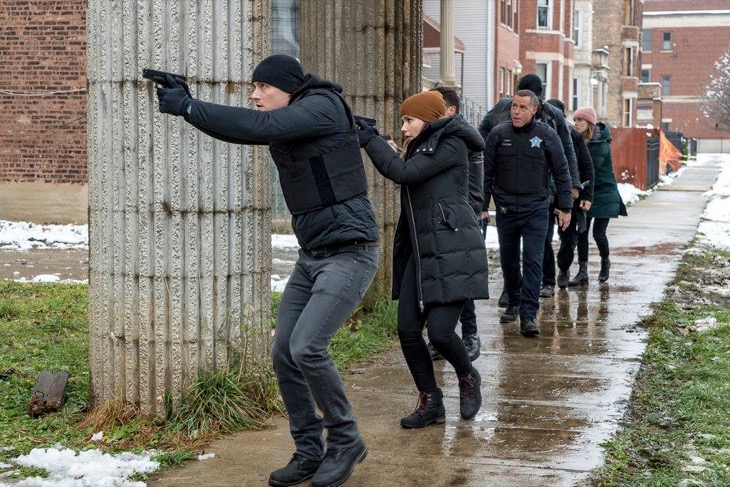 Tonight on NBC their drama Chicago PD returns with and all new Tuesday, January 11, 2017, season 4 episode 12 called, “Sanctuary,” and we have your Chicago PD recap below. On tonight’s Chicago PD episode as per the NBC synopsis, “Two murder suspects take refuge inside a church and the police are blocked from entering it by the priest and parishioners. Rixton, (Nick Wechsler) meanwhile, gets caught in a lie with Voight..”

Tonight’s episode of Chicago PD kicks off with Erin and Atwater arriving at work, he reveals that he booked his first comedy gig. Judging from the practice joke that he shares with Erin – it could be a mess.
Olinsky stomps past Burgess and grumbles at her for leaving a working case file on the seat of her unmarked car. Not great detective work. He reminds her that everything they do in their department is supposed to be confidential.

A woman’s body is found lying in the park next to the water, her pants are pulled down around her ankles. They found a phone near the body – her name is Zoey Sims. They get to work canvassing the neighborhood, multiple witnesses describe two black men that just left the park.

Hank and his team chase the men down on foot nearby – they run in to a church and the pastor locks the door and won’t let the police in. The congregation gathers around the church and won’t let the police inside. The preacher says that the kids are innocent, they are just foster kids that were drinking at the park and were at the wrong place at the wrong time. Legally Hank and his men can’t enter the church because it is a sanctuary, so they set up patrols at all of the exits.

Back at the precinct – they gather all of the evidence that they can. It turns out that the preacher has had quite a few runins with the police for civil disobedience and fighting against the police. Olinsky and Burgess head to Zoey Simms’ mother Lisa’s house to give her the bad news. She saw the news and heard that a girl was found in the park – and she’s devastated when they confirm that it was Zoey.

Olinsky and Burgess head to Zoey Simms’ mother Lisa’s house to give her the bad news. She saw the news and heard that a girl was found in the park – and she’s devastated when they confirm that it was Zoey.

Lisa says that she saw Zoey two weeks ago – she came over because she was upset about her boyfriend Travis. Zoey’s step-father Eddie comes home and tells the police that it is time for them to leave.
Erin and Jay head to Travis’ house, he’s a hot mess and distraught over the news of Zoeys death. He punched out his mirror. Travis swears that everything was fine between him and Zoey – they were planning on getting married. The preacher is turning the case

The preacher is turning the case in to a media frenzy. He has protestors gathered around in the church. Zoey’s mother shows up and confronts the preacher for protecting the boys that hurt her daughter and she hits him in front of the news cameras. Hank sits down with the preacher, he shows him pictures of Zoey’s body. Hank explains that they found the boys’ fingerprints on a vodka bottle right next to Zoey’s dead body. Hank and the preacher have a long history together. This isn’t the first time that they have ran

Hank sits down with the preacher, he shows him pictures of Zoey’s body. Hank explains that they found the boys’ fingerprints on a vodka bottle right next to Zoey’s dead body. Hank and the preacher have a long history together. This isn’t the first time that they have ran in to each other while Hank was working cases.

Miles and Jaylen, the boys that are hiding in the church are only 15 and 16 years old. This isn’t their first run0in with the law, they also got knocked for stealing a car. And, word on the streets is that they are involved with a gang.

Erin and Jay head to Zoey’s office and meet her boss Kirby. He agrees to help in any way that he can and gives them access to all of Zoey’s work files.

The preacher finally lets Hank come in to the church to talk to the boys. It’s the one year anniversary of Miles’ mother’s murder. Jaylen says that he got drunk and passed out, then Miles woke him up and said they had to get out of there.

Hank shows Miles a picture of Zoey – and Miles is right behind him. Miles says that he chased Zoey in the park because she dropped her key and he was just trying to give it back to her.

Before Hank can ask anymore questions, one of the protestors outside throw a flaming bottle through the window. The church goes up in flames, Hank and the preacher rush the boys outside. They throw Miles and Jaylen inside of a patrol car and whisk them away before the protestors can get their hands on them.

The preacher follows Hank to the jail and rants that it is not fair to lock them up without any evidence. He refuses to leave the jail until Hank sets them loose.

The guy that threw the Molatov cocktail in to the church is none other than Zoey’s boyfriend Travis. They bring him in for questioning – he insists that he was just helping get the boys out of the church.

Erin and Olinsky head to Zoey’s apartment. They talk to the landlord and learn that Zoey had a guy over a lot ,but it wasn’t her boyfriend, it was her boss Kirby.

Erin and Jay question Kirby again – he admits that he and Zoey got in a fight the morning that she was killed because he wanted to break it off. Kirby has an airtight alibi, he was at a logistics meeting at the time of Zoey’s death.

The DNA test come back – and it’s not a match for Miles or Jaylen.

The police are right back where they started, and they have no leads. Erin and Jay head back to the park and they catch a lucky break and find a surveillance camera that they didn’t know existed before. They watch the footage and realize that right before Zoey was killed, the park security guard was following her. Burgess interviewed the security guard the day that Zoey’s body was found and remembers that his name is Russell Tillman.

The Chicago PD rush to Russell Tillman’s address, but the house is empty, no one’s home. They do find a human head in the freezer though. Hank orders his people to get out of the house and set up surveillance, so they can catch him when he comes home.

Jay and Erin take the head to the lab – it belongs to John Gleason, the owner of the house where Russell Tillman is living. John Gleason rented out a room in his house to a boarder he met online – Russell Tillman. It looks like Tillman killed John Gleason and froze his head, and kept cashing his retirement checks.

Tillman returns to the house, but he realizes that there are cops outside and tries to make a run for it. The police chase him down in their cars – Atwater crashes and loses him. But, Burgess and Olinsky are still in pursuit. They find the truck parked at the end of the street, and Tillman ran in to the woods.

Olinsky heads in to the woods, and Tillman jumps out with a shotgun. Luckily Burgess has Olinsky’s back, she tackles Russell Tillman and handcuffs him before he has a chance to shoot her partner.

At the police station, Jay and Hank question Tillman. He insists that he is innocent and he didn’t rape Zoey. He swears it was Miles and Jaylen. Tillman admits that he killed his roommate John Gleason, and says it was self-defense. But, he kept the head so that the police couldn’t identify john’s body.

Hank roughs up Russell Tillman a bit and it seems to jog his memory, Russell finally admits that he had “urges” every time he saw Zoey and he couldn’t fight them any more. Russell is a pretty sick guy, he doesn’t regret killing Zoey, he says it was “Everything he hoped for and more.”

Tillman is arrested, then Hank heads downstairs and sets Jaylen and Miles free. They’re happy that the real killer was caught – and the preacher takes the boys home.

Tonight’s episode ends with the Chicago PD raising money to repair the church, they head over and help with the repairs. Afterwards, they head to the comedy club to watch Atwater’s show – and it’s a hit!