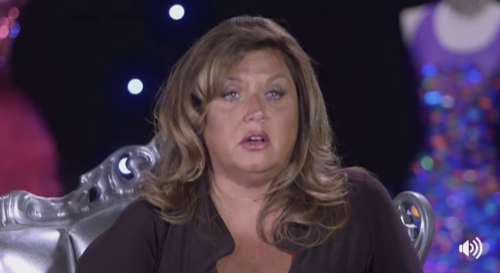 Tonight on Lifetime Dance Mom returns with an all-new Tuesday, October 24, 2017, season 7 finale and we have your Dance Moms recap below. On tonight’s Dance Moms Season 7 Finale, “Under Cheryl’s Spell – The Best Is Yet to Come,” as per the Lifetime synopsis, “In the Season 7 finale, Cheryl adds an old rival to the team. Kalani suffers an injury, putting her solo and the group routine in jeopardy; and pressure brings Camryn to her breaking point. Then, the team prepares for their final Nationals competition as the Irreplaceable. With four solos, the girls go head-to-head to see who can come out on top as the National title winner.”

Jill and Kendall had to miss a competition. Jill had already told her older daughter that she would be at her dance recital and that turned a five-girl group into a four girl group. But Cheryl believed they needed five girls to win and so she announced tonight that she was bringing in someone new. Cheryl had asked Reagan and her mother Julie Martin to join the team and the pair had been more than happy to, however, the other mothers hadn’t liked what Cheryl did. They thought they should have been consulted and had dreaded the idea of a newbie coming in to seal the solos. So the mothers had wanted to talk to Cheryl about what she did and she wasn’t having it.

Cheryl said that it was her team and therefore she believed she didn’t need to consult with anyone. But the mothers were still upset. They knew Reagan from before and she was good yet the moms hadn’t wanted her to get a solo because they believed their daughters deserved it more and that Cheryl shouldn’t give anything to the newbie. So when Cheryl later made her decisions and decided she was going to give Reagan a solo, all hell broke loose. The older girls were upset and said they were tired of being backup dancers meanwhile their mothers were willing to shout down Cheryl just to change her mind

But Cheryl wasn’t willing to put with their abuse. She reminded them that they were in front of their daughters and needed to set an example, but the mothers simply went out into the waiting area and continued to complain. They got into an argument with Reagan’s mother who was just wanted her daughter to be given a chance and so they yelled until the other mothers decided to leave Julie by herself. Except Cheryl didn’t let that distract the girls. She had decided that the group routine would be based on the Broadway show Wicked and she gave out three solos to Reagan, Kalani, and Camryn.

So nothing was going to change for Cheryl. She had made up her mind and was going to stick to it when disaster struck. Kalani had injured herself and she wasn’t going to be able to do her solo. She had reassured Cheryl about the group routine because she said she could push through that and so that led to a few questions. Like if she was fine for the group then why can’t she do the solo? Christi thought Kalani might have been worried about dancing against Reagan again seeing as Regan had beaten Kalani the last time the two competed against each other. And so there was backroom whispering going though Kalani eventually had to pull out of the group routine as well.

Kalani’s ankle had changed colors and was also swollen. But Cheryl had ultimately pulled her from the group routine because she wanted Kalani to rest up and not further risk her ankle. So it went back down to a four girl group and the girls had had to relearn their steps after they had gotten used to dancing alongside Kalani. Kalani, on the other hand, had gotten upset when she had gotten pulled and had broken down in tears. She said she hadn’t wanted to disappoint Cheryl or the team and so Cheryl took her aside because she didn’t want Kalani to think she was upset with her. She knew why Kalani couldn’t dance and have told Kalani that she could never disappoint.

Only that wasn’t Cheryl last fire. Cheryl had gotten Kalani out of her own head however she couldn’t do the same with Camryn. Camryn had some doubts about her own dancing that she would get hung up on others’ expectations. She too hadn’t wanted to disappoint Cheryl and so she pushed herself to do better. But Camryn had gone the additional lengths when she found out that she was just going to be competing against Reagan. Reagan had beaten Kalani and so Camryn had doubted whether or not she could beat her. So the only way to solve whatever was going on with her was the competition itself.

Both Camryn and Reagan had danced unique solos, but Camryn had still been doubting herself even after she danced and everyone loved it. So Cheryl had to tell her to snap it for the group routine and the one time anyone had seen a genuine smile on Camryn’s face was when it came time to judge. The judges had given the group routine first place and Camryn went on to first place overall for her solo. And so when it came time for Cheryl to make a decision about Reagan, she chose not to keep the younger girl because she had a problem with expressing emotion while Camryn merely needed to work on technique.

So “The Irreplaceables” went into the Nationals on a win. But Jill and Kendall’s return hadn’t been all they hoped it would be. The two had gotten some side-eye from Cheryle for going on “vacation” and things really popped off when Jill realized her daughter wasn’t going to get a solo at Nationals. Nationals was the last event of the season and Jill wanted her daughter to have a solo especially as Cheryl had never given Kendall a solo when she knew her daughter deserved better. Kendall had been on the team for years and she never took a couple of years off like a certain someone else. And so Christi knew who Jill was talking about.

Christi and her daughter Chloe had taken a few years off because they had suffered from a terrible experience with Abby. But Christi liked to remind everyone that Chloe and Nia when the OGs. The girls had been on the team long before it became famous and when they danced in a group of seven back in Pittsburg. So Christi harped on that because she knew how much it drove Jill crazy yet Jill kept reminding Christi that her daughter. Kendall and the others had stuck it out together and they developed a team that Chloe could join. And so the two mothers had it out for each other and nothing could fix it.

Not even when Kendall had received her own solo and Jill had been happy about her daughter finally getting a chance. But four girls were given solos. Nia, Chloe, Kalani, and Kendall had all been given chances to shine. So the pressure was on. These same girls had complained before about being passed on and so they had to prove that they deserved the spotlight what with this being possibly the last competition for them as a group through the pressure onstage was nothing compared to the tension behind the screen. The mothers kept going at each other and Kalani’s ankle hadn’t completely healed.

Kalani’s ankle would often freeze up during practice and so Nationals had been a big question mark for her. The adults didn’t know if she could or even should dance. But they left that decision to Kalani and she said she could do it. So Kalani when into Nationals with a bum ankle and she pushed through. She danced quite beautifully onstage and then collapsed offstage the second it was over. Kalani’s ankle had been in a lot of pain after her solo and still, she had to push on for their group routine because Cheryl had decided to try something new for their group number. The choreographer had decided to introduce some Latin ballroom to the girls.

But the girls have never danced ballroom or anything close. So Cheryl asked the girls to take a huge risk at one of the biggest competitions in their life and, while that worried them, they chose to do it because they knew Cheryl wanted to win just as much as they did. And so the only hiccup had been Chloe’s nosebleed. Her nose had started bleeding for no reason and it had gotten really bad before Chloe said that she was fine. She didn’t want to miss out on the group routine and surprisingly the routine had gone on to be a big hit. The audience loved the Latin ballroom element and so did the judges.

The girls won first place in the group and they took up most of the spots in the overall. But the one girl that Abby has always doubted – Nia – had been the one to walk off with first in the overall while Kalani tied with second! So overall the girls did great at Nationals and hopefully, their story isn’t over!