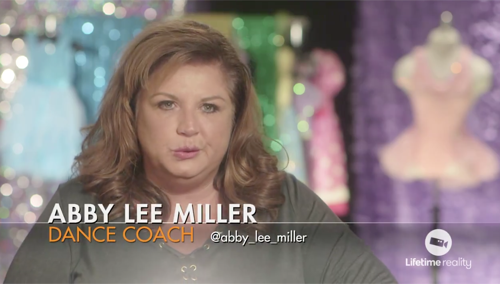 Tonight on Lifetime Dance Mom returns with an all-new Tuesday, January 17, 2017, season 7 episode 8 and we have your Dance Moms recap below. On tonight’s Dance Moms Season 7 Episode 8 “ALDC Ain’t Dead Yet,” as per the Lifetime synopsis, “The girls go to a cemetery to prepare for a graveyard-inspired group routine. Later, the moms are frustrated with Brynn’s special treatment; and Elliana and Lilliana are assigned head-to-head solos, leading Yolanda to crack under pressure at competition.”

Abby can sometimes be her own enemy. She says doesn’t like drama in the studio and then she causes it. But Abby had met her match during the pyramid this week. She had put certain girls at the bottom because she said their mothers had gotten them into trouble however she hadn’t put Nia at the top of the pyramid and Nia had deserved it. Nia had led the team in the group routine and they had won the all-around. So Nia should have been at the top and the fact she wasn’t had been a little too much for Nia’s mother Holly. Holly knew that Abby would never treat another girl like that and so she called out Abby.

Holly had reminded everyone that Abby had said she would blame Nia if the group didn’t win and so she thought her daughter deserved to be recognized for their first ever win in Fresno. However, Holly wasn’t the only one that was upset. Nia had also spoken up for herself when she said that Maddie would have been at the top of the pyramid if she had led the team. So some of the other mothers had stood by Holly. They said they all expected for Nia to be at the top and they didn’t understand why she was yet Abby’s excuse for that happened had been pretty lame. She said that Camryn’s acting skills had been nice at the end.

Yet, Holly had gone back to the mothers’ area rather than continue to argue and Nia simply wanted to find out about their dance. So Abby pretended like nothing happened and she had went on to tell the girls about this week’s competition. Abby had said that Lilliana and Elliana were both going to be given solos. She had wanted them to do something light and fun though Abby had wanted to go a lot darker for the group routine. Abby had wanted to do a gravedigging routine for the older girls called “Six Feet Underneath” and Abby also hadn’t wanted Maesi to be part of the routine. She said that Maesi still danced like a kid and she didn’t want that messing up a very dark routine.

Maesi’s mother on the other hand, had thought that Maesi would be perfect for a grave-digging routine. She thought that most of Abby’s routines were about death or dying so she didn’t understand why Abby didn’t give her daughter a chance. Though Jaime hadn’t wanted to give up on changing Abby’s mind. She made sure her daughter went to the graveyard with the rest of the older girls and Maesi had also been at all of the practices for the routine. So eventually that wore on Jamie because it hurt to see her daughter forced to sit things out for hours on end when she knows her daughter has potential, but she knew that Abby saw something in her daughter.

Also there was another mother that didn’t believe Jamie had anything to worry about. Stacey had reminded everyone that her daughter Lilliana was finally getting a solo and that they had been with Abby for months. But Stacey and her old friend Yolanda had actually gotten into an argument about their daughters solos. Yolanda had said that Abby was focusing too much time on practicing with Lilliana because Lilliana needed so much help meanwhile her daughter was hardly getting to learn the dance. So Yolanda had gotten fed up and she had stormed into practice. And that meant she did exactly what Abby didn’t want.

Abby hated it when the mothers interrupted practice and enter her domain without an invitation. However, Yolanda just didn’t know how to calm down and that made her daughter nervous. Elliana was a talented dancer yet the sort of pressure she was under was also making her underperform. So the other mothers had tried to warn Yolanda that her daughter didn’t another Abby and that Yolanda should simply be her mother. Only Yolanda thought the other women were judging her and so she continued to act a little crazy. She stormed in several times during practice and her final touch had been to perform a Charlie Chaplin routine on competition day.

Yet, it was Elliana that was doing a Charlie Chaplin routine for her solo onstage and some of the other mothers thought it was odd that Yolanda wore a matching costume to her daughter’s. They said it could be distracting for Elliana and Abby had told the other woman straight out that she took some of Elliana’s thunder. So Yolanda should have stopped there and not that surprisingly she had to keep going. She later approached Abby not long before her daughter was supposed to hit the stage and she said that the hat was coming too far down into her daughter’s face and that she could ensure that it doesn’t with a ziptie. And Abby said no.

Abby didn’t want to ruin the Charlie Chaplin look and to be honest Yolanda had been warned about that because some of the others had told her that she should have do it. Probably without telling Abby about it. Though Yolanda didn’t know how to take a no and she kept talking so Abby told her that if she didn’t shut up that her daughter wouldn’t dance. So Yolanda zipped it and her daughter got to dance, but Elliana had messed up on stage. Elliana had like a body roll and she hadn’t done it on stage. She said that the floor had been too sticky for her to do it and Abby had thought she was making that up because she had forgotten to do the roll to begin with.

Which was unfair however Yolanda hadn’t spoken up for her own daughter. She could have and she didn’t so that frustrated Kalani’s mother Kira. Kira had felt so bad for Elliana that she wanted to adopt the girl and save her from her mother. But Lilliana had impressed the judges and had come in first with her solo “Dainty & Dangerous”. So the ALDS were doing well in the competition and what put them back on top had been their third consecutive win in the group routine. The judges and the audience had all loved “Six Feet Underneath” because it had been such a moving piece and so there had been no doubts about that one.

However, some of the others had overheard Elliana apologizing to her mother and so Yolanda explained that her daughter told these stories to get out of trouble. So the mothers had wanted to give Yolanda some more advice and she had run out of the room crying. That is after she accused them of accusing her of abusing her child.