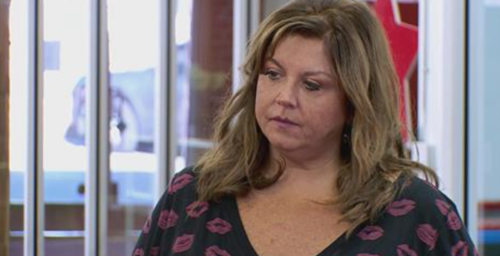 Tonight on Lifetime Dance Mom returns with an all-new Tuesday, January 31, 2017, season 7 episode 10 and we have your Dance Moms recap below. On tonight’s Dance Moms Season 7 Episode 10 “The ALDC travel to Denver for a competition, where Kalani, Kendall and Nia perform solos. Later, the mini team does a technically-complicated group dance; and the moms worry about ruining their winning streak with Nationals approaching.”

There have been a few shakeups here and there however Abby had promised everyone that she was done with her little surprises and had in fact reassured the lot of them that there wasn’t a new person waiting in the wings to join the team. But the mothers of Abby’s team had hoped that would be the end of it. They all knew that nationals were coming up and they didn’t want their girls having to adjust to someone else. So the ladies were tired of the revolving door and they were focusing on what came next and had thought that Abby was focusing on that as well.

However, this week’s pyramid had caused some strife. Abby had apparently placed Maesi in the second to last spot and her mother Jamie hadn’t been able to control her temper when she saw that. She had thought her daughter did better than such a low position because Maesi had won in her category recently. So Jamie had let rip a few curse words yet the other moms on the team had had a problem with someone cursing around their children. They thought that was out of place and had expected that Jamie would get around to apologizing. Which didn’t happen!

Jamie was unapologetic for what she said and later she had been taken to task for that behavior by Stacey and Yolanda. Stacey and Yolanda have the youngest kids on the team and they didn’t want their girls to hear curse word much less repeat them. Yet, Jamie didn’t waver or back down because of those two. She had dealt with them before and had simply wanted to focus on the routines that the kids were going to be performing at Sheer Talent. Sheer Talent was in Denver, Colorado which was Elliana’s hometown though Abby didn’t want to give the little girl a solo.

Abby had said that Elliana was going to be dancing in the group routine with everyone else and so she had thought that would stop any complaining in their tracks. Though what she expected was that the mothers would get upset. The mothers of the older girls had hated that their daughters were going to be dancing with the minis because they knew that didn’t work for them. So they slowly got angrier as they saw that the group routine was taking forever to practice. The minis it seems had needed some help to form a straight line and so Abby had placed tape down the room.

Abby had wanted the girls to get it right and that’s why she brought out the tape. But the mothers of the older girls had pointed to that tape as evidence. They had said the minis didn’t have the technical skills to dance with the older girls and that the solos were suffering because Abby was too focused on getting the group routine right to practice for the solos. So the mothers of the younger girls had tried speaking up for their children however it was hard for them to do that when they saw how little time the soloists had.

Kalani, Kendall, and Nya had all been given solos. Kalani had been given a contemporary number called “Say Something, Say Anything” and it was about a young girl’s frustration with her boyfriend that seems to be spending more time on his phone than on her. So Kalani had been given an elaborate story that wouldn’t work without acting skills yet Abby had thought that Kalani could handle after last week when she stood out in the group number and so Kalani had naturally been expected to receive a high score.

Yet, Abby was expecting just as much from the other girls as well. Kendall had been given a lyrical number called “The Journey” and it was supposed to be about her own journey that she took in order to become an elite dancer. So Kendall had some leeway and actually so did Nya. Nya was dancing in the open category and she had been given a dance called “The Promise Land” which was supposed to be about the first female president. And so Nya had had room to make that role fit her own personality.

Only Abby managed to fail on what little direction she was supposed to give to the soloist. Abby had focused so much on the group routine that she had spent probably thirty minutes teaching the soloist their routines. So the mothers rebelled. They had gotten angry that the girls had been given so little time and expected to win, but they thought that there might be something wrong with Abby. The mothers had been paying attention and they thought that there was something weighing on her mind. Though when they confronted Abby about what she did, she cracked.

Abby had surprisingly gotten teary-eyed after the mothers accused her of setting the soloist up to fail. But usually Abby was able to yell right back at them or at the very most frighten them into not saying something. So Abby cracking had definitely shown that there was something wrong and that’s why her head was where it was supposed to be however Abby did more than getting teary-eyed and leaving the room. She had also gone on the argue with the producers and had even broken some glass as a way to get fired.

So the mothers that there was something truly wrong and a few of them thought it was because Abby would be returning to Pittsburg soon. Pittsburg was Abby’s hometown and so she would be facing a lot of people there and she would be asked about her court case. However, the mothers didn’t know what was wrong with Abby and so they merely hoped she would show up at the competition. And luckily she had showed up yet she hadn’t wanted to speak with anyone and had simply taken a seat in the audience.

Which in a way was a good thing because no one argued and everyone got to see the girls compete. Yet, despite what happened with Abby, Kalani went on to win the overall as well as her division and Kendall did her team proud by placing first in the Teens division. So the girls went on to win even though they didn’t have a lot of practice and it had been a miracle when they eventually won for their group routine. The routine had had some mistakes and it had looked messy.

Though when they later pointed that out when they were all going home, Abby snapped at them and told them to get used to it and that had been after the girls themselves had said they hadn’t done their best.