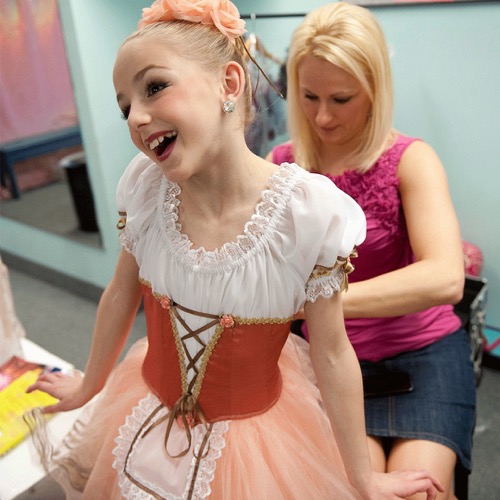 Tonight on Lifetime Dance Mom returns with an all-new Tuesday, February 14, 2017, season 7 episode 12 and we have your Dance Moms recap below. On tonight’s Dance Moms Season 7 Episode 11 “The team travel to Pittsburgh for Nationals, but mounting pressure leads to feuds between the moms. Later, Abby questions Camryn’s desire to be on the team; and the ALDC compete against the Candy Apples in their last face-off before Nationals.”

Abby Lee was back in Pittsburg. She went home to prepare for Nationals and the Sheer Talent Competition however, she hadn’t thought going back would be so hard. Abby had left Pittsburg believing that she would keep her studio there running and that she would have gone up in the world. But then her financial situation happen and she had been forced to rent out her studio there to someone else. So it was bittersweet seeing someone else’s name on the door and she had actually tears in her eyes because she was coming back in a good place.

However, Abby had wanted to cry in front of anyone and more importantly she had wanted to get her team finely tuned. So Abby did the pyramid. Abby had had all of the older girls in the bottom level because she had noticed mistakes here and there yet what frustrated the regular moms had been that Abby had placed the minis in second and top place. Kira had snapped when she had seen that and she had even yelled at Abby. She said that Elliana had come in as the fifth overall on the last competition and she wasn’t half as talented as her daughter.

So Kira had gotten into a public argument with Yolanda because of what she said about Elliana. Yolanda had thought that her daughter deserved to be on top of the pyramid and that Kira was being insulting everytime she said Elliana had come in as fifth. Yet, Kira eventually gave up and had pulled Kalani out of the group routine because she said that Abby didn’t deserve. And the only person that had punished had been Kalani. Kalani had wanted to dance and had argued with her mother.

Kira though refused to back down. She knew what her daughter deserved and she stood up for her which wasn’t something the other mothers were doing. But the drama was far from over. Kalani had gone back in to apologize to Abby because she had wanted to dance and had merely left in order not to cry in front of everyone. So that made Abby cry and then Kalani started to cry and it was all very emotional. Even her mother hadn’t exactly seen that at the time. And so Abby had to respect Kira’s wishes.

If mothers want to pull their daughters from the studio or from a dance then that was their right. Yet, Kalani had eventually been put back into the dance and her mother had appeared been fine about that though she was getting into arguments with some of the other mothers. Kira had gotten into an argument with Camille afterward about Camille’s daughter Camryn. Camryn had allegedly told everyone on the team that she didn’t want to be there and someone told. So Camryn had been asked if she wanted to be there and she as well as her mother had said “yes” even as everyone called “bull”. And that’s including Kira.

Kira had told Camille that she also heard that Camryn said she didn’t want to be there and Camille had said that her daughter had never told her that. Though that had also been a lie because Camille had shown Yolanda a text from her daughter in which Camryn said she hates all of them. So the “them” sounds like it could be Camryn’s own team and Kira thought Camille was ignoring her daughter’s own wishes by forcing her to be in the competition, but the two ladies just kept fighting about it until their old nemesis showed up at the scene.

The Sheer Talent Competition in Pittsburg meant they would natural run into Cathy though Cathy and her Candy Apples Dance Moms had thrown the first punch this time. Someone from their side had made fun of Kendall by saying she lacked talent on the dance floor and couldn’t even sing. But that had been spiteful and to go after a child had been something that Abby’s moms could all get around. So the fight was on the second they went into the competition. They first had to tear down the paper brick wall that Cathy had wanted Abby to walk through and then the fight happened.

Jill had yelled at Black Patsy for what she said about her daughter and then they were just trading insults. “You’re fat!” “No, you’re fat”. However, the cursing and the scene had been too much for Abby. Abby had notified the people in charge of the competition that the Candy Apples had gone too far and she recommended that Black Patsy’s daughter Nicaya should be thrown out of the competition. So the Candy Apples had heard about that and they had gotten into Abby’s face hoping to provoke her.

Though Abby never once put a hand on them and she hadn’t been the person that threw the paper book. That had been Black Patsy and she had riled Camille with that little stunt. So they each went back to their makeup areas and they had wanted their girls to beat the other’s team, but Camryn who had been given a solo had tried her best knowing it was her last chance with Abby and the other girls had said that she looked great despite what Camryn had said about all of them. And so it must be true.

The group routine on the other hand had been a toss-up. The Candy Apples were good and they had technique yet they had all done a dance around building a wall and that wasn’t something to be taken lightly in this day and age. But to give Cathy her due, she had thought building a wall would be a message to Abby that her team wants nothing to do with hers. So she hadn’t thought that there was anything wrong with the theme of her group routine and she surely hadn’t known that she had offended Black Patsy who was both black and a lesbian by bring up Trump.

Then again, Black Patsy just thought Cathy’s white privilege had blinded her to the ramifications. So everyone had gotten through that group routine and Abby’s group hadn’t done so bad for itself though the teams didn’t know where they stood until the results were called. And Abby Lee’s Dance Company had beaten Cathy’ Candy Apples at every turn with Camryn winning a solo and the group taking first for their routine.

Yet, just as the girls had all talked and Camryn had finally been given a team jacket, Jill stopped by to tell them that she was going to be use Zack at Nationals.