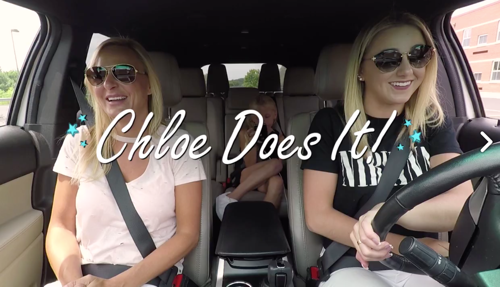 Tonight on Lifetime Dance Mom returns with an all-new Tuesday, August 15, 2017, season 7 episode 16 and we have your Dance Moms recap below. On tonight’s Dance Moms Season 7 Episode 16 “Part 1 of 2. The moms bring in world-renowned choreographer Laurieann Gibson, whose intensity and passion shakes things up at the ALDC. Meanwhile, ex-ALDC member Chloe returns to the competition world for the first time in two years to dance against her former teammates.”

Abby’s sentencing has been hanging over the moms’ heads for a long time. Abby has decided to go to Europe so they have brought Laurieann Gibson in, an Emmy-award winner dance instructor/choreographer to the stars. Laurieann is happy to be there. She wants to try this for a week. She says hi to the moms and dancers. She tells them she makes stars, she doesn’t make robots like Abby. She is going to teach them to be her tribe.

Laurieann asks for a show of hands to see who feels like Abby has held them back. Nia cries. She feels like Abby has been the hardest on her. Laurieann explains to her that it will make her stronger. They get right down to business working on their numbers. Laurieann gets out on the floor and starts showing them their moves. The mothers are shocked and happy. During practice, Kendall doesn’t seem to get a move. Laurieann asks everyone if Kendall is lazy? No-one answers. Kendall tears up. Laurieann tells her to speak her mind. Kendall tells her that she isn’t lazy. Laurieann tells her to scream it. She does.

Meanwhile, Chloe, who used to compete with the girls of Abby’s studio, will be competing against them all in the upcoming competition. Chloe has not danced in a while.

Laurieann has all of the girls dance individually as she gauges their talents. She is happy with all of the talent. She only has 3 solos. Nia nabs a solo. Her mom is thrilled. Laurieann dismisses the moms.

Chloe is in the studio. She is a little rusty. Her mom Christi is surprised.

The moms at the ALDC sit around talking about Abbyís latest sentencing. It has been pushed off. They wonder is she will show up at the studio. They wonít feel bad if she does.

Two days to competition. Laurieann works with Nia on her solo that is titled No Regrets. The moms watch. They like Laurieann’s hands on approach.

Laurieann meets with Maesi to work on her solo. The moms discuss how they don.t think Maesi was ever a black sheep in the ALDC. Jaime disagrees. Jill gets angry. They argue. Christi calls Holly to tell her that Chloe will be dancing against them this week at the competition.

Kalani and the girls go for hot chocolate to talk about the studio without Abby there and Chloe. They all agree they like Laurieann. Nia thinks it will be nice to see Chloe even though they will all be competing against her.

Back at the studio, the moms all talk about Laurieann and how their child didnít get a solo. Camille thinks their team has never caught the eye of anyone important because if it did her daughter Camryn would be off working right now. The moms get into a loud squabble. Laurieann comes over. The moms rat out Camille. Laurieann tells her in front of the others that Camryn is good, but she isnít great.

At the MDP rehearsals, Chloe feels weird. She is the new girl. After the girls of MDP chant, Chloe goes to the bathroom and cries. Her mom comes in. She isn’t used to this team.

At ALDC, the moms find out that Abby is headed to Mexico for business because her sentencing has been delayed. Camille points out that she does not care about them. Jill thinks the competition is their judgment day.

The girls arrive at Fierce. It feels weird for them to arrive without Abby. ALDC and MDP face one another before they compete. Christi and Jill get into a public fight about Christi leaving them because she couldn’t control, Abby. She tells Jill that isn’t true. They exchange words back and forth while Laurieann looks in shock and the others mothers stand by without saying a word. Finally, Christi walks away and Jill does too. Jill continues to yell as she enters the building. Chloe cries.