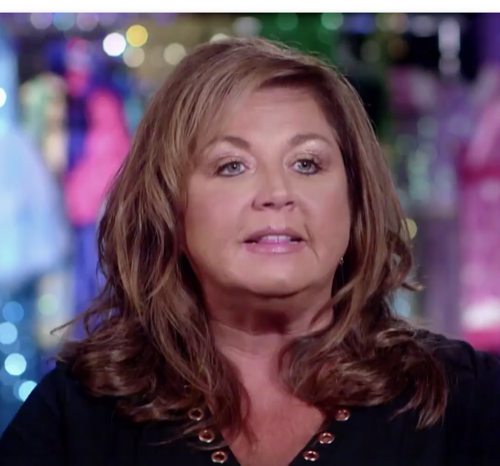 Tonight on Lifetime Dance Mom returns with an all-new Tuesday, September 12, 2017, season 7 episode 21 and we have your Dance Moms recap below. On tonight’s Dance Moms Season 7 Episode 21 “Part 1 of 2. Abby makes an unexpected return to her studio, but not everyone on the team is happy about it. Chloe performs for the first time in front of Abby in two years, but struggles with missing her old teammates. Ashlee makes a decision that sends shockwaves through the group, and after an unexpected series of events, the team will never be the same.”

Abby was back! She didn’t tell anyone that she was coming back and she didn’t want to explain her former absence because she said that it was none of their business. But the moms were angry. Their children had been abandoned while Abby ran off to Mexico and the first thing Abby said when she came back was that she was there under duress. So the moms didn’t want to bother themselves with whatever Abby was up to and most of them chose to walk out. The mothers of the older girls left and took their daughters with them however the minis stayed.

The minis hadn’t really gotten the chance to dance with Laurieann in charge and so their mothers were fine with putting up with Abby as long as their daughters were given a routine. However, the other mothers still wanted to fight for something better. They had all liked having Laurieann around because she wanted to be there and they felt she wanted to be there. So the women had called Laurieann to ask her if she wanted to do a number with the older girls and Laurie had told them “no”.

She said that she couldn’t work with the girls because it was a request from Abby. Meaning Abby really did run Laurieann out of the studio when she came back though the mothers couldn’t understand why seeing as Abby didn’t want to be there and had acted like their children’s careers were a hobby for her. Yet, the mothers marched themselves back into the studio and they demanded answers. They wanted to know why she had gotten rid of Laurieann and Abby acted like she had every reason in the world to do what she did.

Abby said Laurieann couldn’t teach kids, that she came up with crap routines, and that she had a losing streak under Abby’s studio’s name. But Abby seemed to angriest at the whole losing under her name. She said that she needed to go on a break and so she directed all other questions to her lawyer who was willing to answer them though that just made everything worse between her and the dance moms. They didn’t have any answers and therefore they no longer they could trust Abby to treat their daughters properly. So they had their girls cleared out their stuff and left.

They had had it with Abby and Abby was still refusing what she did was wrong. Though Abby didn’t worry herself about her team walking out. She said that they would be back because they had no other choice and she sorta had a point. The older girls were left without a studio or choreographer lined up and so they didn’t realize how hard it would be to replace what they had at Abby’s. Except Jaime later changed her mind. She didn’t want her kid to end up with no one and therefore she brought Maesi back to Abby’s studio.

However, Jaime wasn’t such a pleasant sight for everyone. The minis as it turns out had already been given solos and so their mothers didn’t want Maesi coming back to take away from their own kids. So they talked to Jaime about it almost as if they were warning her, but they didn’t bother her and she had more reason to be concerned about Abby who hadn’t been pleased with Jaime wanting her daughter to dance. Abby had said that she handed out solos and that Maesi had walked out with everyone else before.

So Jaime had taken the blame on herself. She said that it had been her decision to pull her daughter out because Maesi had been hurt when Abby didn’t come back and had been left in a confusing position. But Abby decided to let it go for once and she gave Maesi a routine and chose to ignore the mini-moms. The mini-moms had wanted there to be some consequences for Maesi for leaving even if she did come back. And so Jaime had had to snap at them for trying to sabotage her daughter.

The other Dance Moms on the other hand, hadn’t wanted to cave and so they got studio just no choreographer. Yet, Kalani stepped into the leadership role and she came up with a choreography. She said that she wanted to do that for a living one day and that someone needed to step into the position because they didn’t want to go back to Abby. Abby has treated them like crap for the past couple of years and the girls all felt that she had let LA get to her head. They said that she checked out and that she called them lazy when she was the one that wasn’t paying attention.

Plus, one of the things that had upset everyone the most was the fact that Abby never acknowledge anything good the girls did because she thought it was all for her. So the girls were all open to skipping out on Abby and they were proud they had come up with their own choreography, but all the same, cracks started to show before long. The girls or at least most of them have known each other for years now and so they sometimes spoke over the newer/quieter girls in the group. Like Brynn.

Brynn was given something quite tough for her to do and the other girls demanded that she did it anyways. But Brynn didn’t want go be standing on anyone’s shoulders, or twirling up high, and she sure as hell didn’t want to fall because she wasn’t sure if any of the other girls could catch her. She said that they didn’t have mats on the floor in the studio they were using and that there wasn’t a teacher in the room which would have made feel confident about what she was doing. So Brynn didn’t want to do the fall and she was willing to skip the group routine if pushed.

Only there was another option. Chloe for one had gone out and found a new team so the dance moms wondered if that would be best for their girls. However, some of the girls didn’t want to dance with a team because they didn’t want to have learn something new and felt they could win on their own. So Brynn had admitted in her confessional that at that moment she wished she was still at Abby’s because then there wouldn’t be any uncertainties.