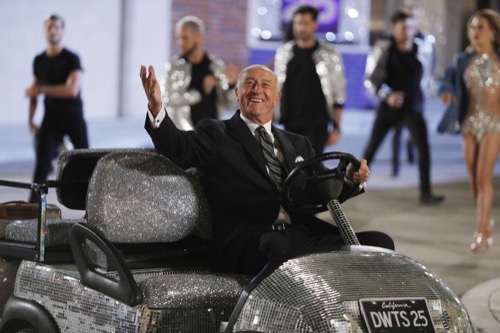 Tonight on ABC the glitz and the glimmer returns to the ballroom for the DWTS season 25 premiere! We have your all-new Monday, September 18, 2017, season 25 episode 1 DWTS “Premiere″ and we have your Dancing With The Stars recap below! On tonight’s DWTS Season 25 episode 1 as per the ABC synopsis, “DWTS is back with a new, dynamic cast of celebrities who are ready to hit the ballroom floor and celebrate the show’s landmark 25th season. The competition begins with the two-hour season premiere, live, MONDAY, SEPTEMBER 18 (8:00-10:01 p.m. EDT), on The ABC Television Network. The premiere will kick off with an exciting opening number featuring head judge Len Goodman and the entire cast of DWTS.”

Dancing With the Stars (DWTS) season 25 kicks off tonight with a fun introduction to the pros and celebs dancing to the song “Dancing in the Street”, where Judge Len Goodman whistles for them to get inside so they don’t miss the premiere. Mandy Moore is congratulated on winning her Emmy for the choreography. Tom Bergeron and Erin Andrews are the hosts while Len Goodman, Carrie Ann Inaba and Bruno Tonioli are the returning judges. Since they are pressed for time, only one Judge will be allowed to comment per couple; there are 13 couples.

Judges’ comments – Len: You really got the party started tonight. It was full of fun and full of energy but you got to watch your feet, they are a bit soft and a straightening of the legs. Don’t dance down, dance up and dance full.

Debbie Gibson says she joined the show for a special reason as she suffers from Lyme Disease. This is Alan Bersten’s first year as a professional dancer on the series.

Judges comments – Bruno: loving, dovey and dreamy; in tune with each other and wonderful chemistry between you that I wants to explore further in the Latin. “You have nastiness in there”. Watch your arms though.

Judges comments – Carrie Ann: someone’s feeling pretty fierce; you looked fierce and know your body, hitting all the angles. Your hands were fantastic but you did get ahead of the music at the beginning but you are on the right track.

Judges comments – Len: Drew, if you were a house, you would be a fixer-upper. You go to fix up your feet, work on getting a little bit more finesse. His brother Jonathan says he is proud of him but he definitely isn’t a “Jonathan!

Judge’s comments – Bruno: Oh Keo, she can shake her money maker! Barbara says it was a sexual turn on and Carrie Ann bows to her. My Darling, you have to make sure you maintain that bite, as its not only in your face but in your feet and in your body so you really must push those hips and place those feet. All the attention went here (he points to his face) and Barbara cuts him off asking Tom “who is this guy?” The intentions were good but the execution needed much more attack.

Jordan Fisher & Lindsay Arnold – Tango – “There’s Nothing Holdin’ Me Back” by Shawn Mendes.

Judges comments – Carrie Ann: Shrieking that was soooo good, this is week one and you shouldn’t be dancing like that. What I lovee the most is the way you let her do that dance. You added so much swagger and content. You guys are the partnership to watch!

Frankie broke his back and ribs while he was racing cars and shares his story with his partner Witney.

Judges comments – Carrie Ann: I was screaming like you were in a boy band, there was something so beautiful about that dance; it was endearing and the exact performance our fans fall in love with, it was honest and vulnerable. You were sometimes a bit stiff in the legs but what a fantastic performance.

Judges comments – Len: Early on you lost it a bit, but I can forgive that, you had body contact throughout the dance. I’ll tell you Nikki, you need to stop looking down; it looks like lack of confidence and uncomfortable. She admits its her worst habit. You need to lift your chin up and come out there and sizzle.

Judges comments – Bruno: Taylor made to make you shine. What a great number, incredibly hard but what I am impressed by you were commanding the stage and its only week one. Salsa requires a much snaky hip, you were doing a forward and backward and lack the round side. It was a great debut.

Val learns Victoria’s story of being in the paralympics and only started walking a year ago; she apologizes if she falls and is very nervous. Val is excited to work with her, as she is the closest thing to a miracle he has ever seen. He thinks not being able to feel her legs is a small challenge compared to what she has been through. She cries in his arms when they are done. Judges comments – Carrie Ann: Wow. I have seen some incredible routines on this show and this is one of the most joyous ones I have ever seen. Your balance was incredible and your leg action was crisp and clean. The best dancers its connection between spirit and body. I know your body is still catching up in ways and I look forward to what the next 10 weeks does for you.

This is Mark’s 19th season of DWTS and 2-time champion, returning after a year off. Judges comments – Len: I was expecting you to be good with the Foxtrot and the Waltzes and you come out there and Cha-cha-cha, it was crisp and clean, nice leg action and that for me was the dance of the night. Lindsey shrieks.