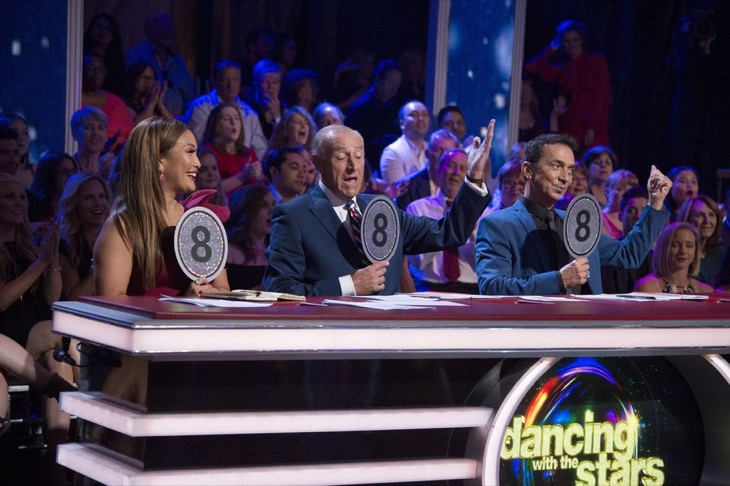 Tonight on ABC the glitz and the glimmer returns to the ballroom as another new episode of Dancing With The Stars season 25 airs! We have your all-new Tuesday, October 2, 2017, season 25 Week 3 “Guilty Pleasures” DWTS  and we have your Dancing With The Stars recap below! On tonight’s DWTS Season 25 episode 3 as per the ABC synopsis, “An elimination occurs after the third week of competition, which spotlights the stars’ guilty pleasures. Confessions include an obsession with boy bands and binge-watching “The Fresh Prince of Bel-Air.””

DWTS began tonight with ABC’s Dancing with the Stars opening with a moment of silence to honor the victims from Las Vegas Shooting. After the silence, the professional dancers and celebrities broke out dancing to “Everybody Dance Now”; there is no elimination this week as this week’s show is all about guilty pleasure; please sit back and enjoy as we focus on the guilty pleasure of the dancers.

After the dance they take a moment to remember that Drew is from Las Vegas.

Len: There was no crime and mystery, good lifts, liked the characterization and a job well done.

Bruno: You cracked the case, with a twinkle in the eye.

Carrie Anne: Going first is tough and you showed the rest of them how going first is done. How amazing was that tango? I am so impressed with your growth.

Bruno: you’re obviously inspired by Will Smith, you really popped tonight and liked the extra spicy movement; keep it going.

Carrie Anne: It was bootylicious, like Bruno said, and what I saw is you’re finally understanding us, understanding your body and way more relaxed. Well done!

Len: Will Smith and I would be proud of you because if you like the music, you perform better and there was plenty of cha-cha-cha content in there. Well Done!

Carrie Anne: I saw how Val had to work hard to give you the support and I feel you are totally on your way to a 10.

Len: One of my guilty pleasures was the right amount of content, and I saw some gaps; I liked it, it was a joyful routine.

Bruno: Victoria is back for sweet revenge and it looks like you tackled the Titan army, but because of the speed you lost the body content but don’t stop, you’re doing great!

Len: Everybody had fun watching that, but that first section was difficult to know who the celebrity was. I thoroughly enjoyed it.

Bruno: Mommy keeps getting yummier! I loved the timeless elegance of a Motown girl band, crisp and relevant. I absolutely loved it.

Carrie Anne: it was great, you two sort of wobbled and the lift wasn’t as graceful as it could have been. You were fantastic and we are in week three, time to get intense.

Lindsey Stirling and Mark Ballas – Jive – “Wake Me Up Before You Go-Go” by Wham!

Len: I thought that had lots of jive, lots of fun, lots of wham and energy and that so far is the dance of the season!

Bruno: I wasn’t expecting anything less from you; these guys can jive, she was never out danced. She was just brilliant!

Carrie Anne: Tonight this will go down as my all-time favorite. You’re getting stronger in both your soul and body.

Carrie Anne: I thought we were watching Saturday Night Live, you should be in a Boy Band. I want some more consistency.

Len: It was nice to fulfill one of your dreams but Carrie Anne was right, we needed more hip action but Frankie I really like you.

Bruno: You passed the audition, I will sign you up. The dancing needed to be a bit more elastic but you got all the talent at your disposal.

Bruno: you remind me of the Swedish chef in the Muppets, all the ingredients were thrown in perfectly. Great fun but it didn’t come together, a little loose here and there.

Carrie Anne: I really waited for the dance to begin, it was insync and well executed but I would love to see more from you.

Len: I don’t have to see more and I know how good a dancer you are, as fun as this was, it didn’t showcase your abilities. Sasha agrees.

Len: Concept, commitment and confidence are the 3 C’s of this dance. Well done!

Bruno: Let’s get physical, 80’s style. Finally got your juices flowing and that is what you have to do!

Carrie Anne: You have balls for wearing a unitard. I love that you’re finally having fun and the loosest we have seen it, who knew jazzercise.

Len: You’ve come back with a nice mix of salsa and entertainment, it’s not a touchdown but you’re in the end zone!

Bruno: It wasn’t a traditional salsa but you popped out of it beautifully. It looked good and he took your hell.

Carrie Anne: It was soooo good, you finally brought it tonight. That is what I’ve been wanting every week.

Carrie Anne: Wrapping my head around what I just saw. It was so amazing, never were you lost, always in control, fastest Charleston I saw in the middle; tonight I have 2 new favorite dances!

Len: I don’t want to be grumpy. Listen you’re a terrific dancer and I enjoyed watching it very much, it was a Charleston but I didn’t see any Charleston and it was too quick for me.

Bruno: That was like watching Mission Incredible, a visual feast. You are an X-Men First Class!