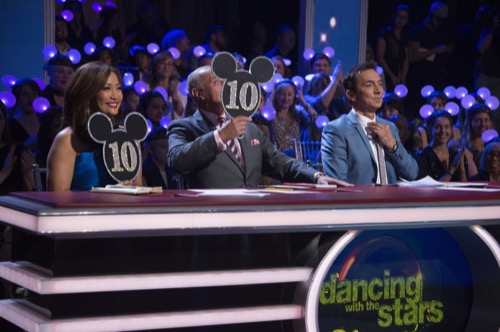 Tonight on ABC the glitz and the glimmer returns to the ballroom as another new episode of Dancing With The Stars season 25 airs! We have your all-new Tuesday, October 23, 2017, season 25 Week 6 “A Night at the Movies” DWTS  and we have your Dancing With The Stars recap below! On tonight’s DWTS Season 25 episode 6 as per the ABC synopsis, “An elimination occurs after the sixth week of competition, which features dances inspired by movie genres. Also: Shania Twain serves as a guest judge, and she performs a song from her latest album.”

It’s movie night on Dancing With The Stars as the remaining nine dancers salute the silver screen. We will see a Paso doblé, jazz, rumba, Argentine tango, samba, jive or quickstep performed.  The guest judge for the night is singer Shania Twain.  Tonight’s opening number was choreographed by Mandy Moore to Hurray to Hollywood.

Judges comments: Carrie Ann: “That was a stunning display of a newfound artistry.  You have improved so much this is a tiny detail the way you extend your movement and you will look like our pros.” Len: “I don’t like reading subtitles.  I did not need subtitles to read this story. You have a tenderness about your dancing that you have to explore more.  I thought that was great.” Bruno: “Oh la la an Argentine Tango with a special French touch.  It had an underlying sensual feeling.  It was like a French perfume, intriguing.” Shania: “The was so romantic. Like a foreign film. It is incredible how romantic and elegant it was.” SCORES: Carrie Ann: 9 Len: 9 Shania: 9 Bruno: 9 TOTAL: 36/40

It was also revealed that Nikki & Arten are SAFE!

The next couple safe is Drew & Emma

The first couple in jeopardy is Nick & Peta

Terrell & Cheryl are in jeopardy

Victoria & Val are in jeopardy

Judges comments: Carrie Ann: “That was a tough routine.  Your energy was explosive.  It got away from you.” Len: ” I am pleased you are safe for next week but I am not overly convinced you will be safe next week. That was awkward looking. The finesses was lacking.” Bruno: “It was like mission impossible meets the Matrix. You went for it like a demented killer but you went wrong.  You got over excited.” Shania: “I thought all the drama was captured and the balance between the feminine and masculine was very well executed.  The timing was excellent.” SCORES: Carrie Ann: 7 Len: 7 Shania: 9 Bruno: 7 TOTAL: 30/40

Judges comments: Carrie Ann: “It hurts for me to hear you say it is hard to come out here.  When you had that breakdown tonight you nailed it.” Len: “Carrie Ann is right when you are doing that solo stuff you look terrific you just have to take that into the Samba. Just dance.” Bruno: “It was an apocalypse Samba.  The line dancing was fabulous.  The Samba is hard for me.  You can never look like you are forcing it.” Shania: “You were lacking a bit of confidence.  I felt your apprehension.  But your performance was very entertaining and very high.” SCORES: Carrie Ann: 7 Len: 6 Shania: 7 Bruno: 6 TOTAL: 26/40

Judges comments: Carrie Ann: “Victoria what is amazing about you is how you went back and forth it was a hard and intense dance.  Well rehearsed.” Len: “I like the concept I thought it was terrific.  Overall a great job.” Bruno: “Well done I could see a proper Paso Doble.” Shania: “Well that is the most innovative hockey game I have ever seen and a lot of energy.” SCORES: Carrie Ann: 8 Len: 8 Shania: 7 Bruno: 8 TOTAL: 31/40

Judges comments: Carrie Ann: “You are a smooth operator that was oily.  It was hot!” Len: “I have to say 007 it was not quite but you are like the big Easy you have style.  That is a compliment. Best dance!” Bruno: ” You have such a slick, sexy charismatic swagger.  You are becoming a better and better performer.” Shania: “I think your determination was clear and the attention to the detail was so gorgeous. I enjoyed the class and elegance.” SCORES: Carrie Ann: 9 Len: 9  Shania: 10  Bruno: 9 TOTAL: 37/40

Judges comments: Carrie Ann: “It was really entertainment but there were a lot of mishaps.  You have the best attitude.” Len: “Frankie goes to Hollywood and gives enthusiasm.  Well done, so entertaining.” Bruno: “I was not sure if I was watching Frodo on acid.  Whitney, you worked to his talent.” Shania: “I loved it I thought you were so liberated.  I really enjoyed all the footwork.”  SCORES: Carrie Ann: 7 Len: 8 Shania: 8 Bruno: 8 TOTAL: 31/40

MORE RESULTS ARE COMING IN

Judges comments: Carrie Ann: “Something happened you lost your skirt but you just let it go.  Fantastic.” Len: “You have to get your posture to go. I have given you 8s but I am debating if this deserves, less or more.” Bruno: “Theatrical, pizzazz, and glamour.  You killed it.” Shania: ” For me, on the entertainment value it was sass and class.  You kept your composure when you lost your skirt.” SCORES: Carrie Ann: 9 Len: 9 Shania: 9 Bruno: 9 TOTAL 36/40

Judges comments: Carrie Ann: “Jordan when I watch you it is like watching taffy when you. move you stretch it is like one movement.  It never stopped.  It was like a wave of gorgeousness.” Len: “It was well crafted.  I liked the mix of dance. Your arms should be as expressive as your face but those little things you did got on my nerves.” Bruno: “You have strength and fluidity and it looks effortless.” Shania: ” Well I hear what you are saying Len but it did not distract me.  I thought it was elegant.  I felt she was with you even when she was distanced.” SCORES: Carrie Ann: 10 Len: 9 Shania: 10 Bruno: 10 TOTAL: 39/40

Judges comments: Carrie Ann: “This is when the time it really matters.  You upped your game to somewhere phenomenal.  You slew that dance.  Well done.” Len: “I know it is a sci-fi but I thought the choreography was phenomenal and the dancing was brilliant. You deserve a 10” Bruno: “You have created another work of genius. It was superb Argentine Tango. The best dance of the season.” Shania: “It was so graphic and intense.  I have never seen such sharp edges look so elegant.” SCORES: Carrie Ann: 10. Len: 10 Shania: 10 Bruno: 10 TOTAL: 40

The next couple safe is Victoria & Val