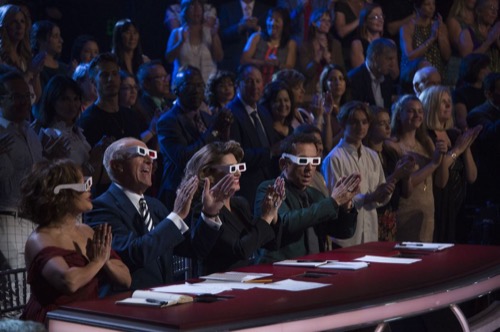 Tonight on ABC the glitz and the glimmer returns to the ballroom as another new episode of Dancing With The Stars season 25 airs! We have your all-new Monday, October 30, 2017, season 25 Week 7 “Haloween Themed Night” DWTS  and we have your Dancing With The Stars recap below! On tonight’s DWTS Season 25 episode 7 as per the ABC synopsis, “An elimination occurs after the seventh week of competition, which features Halloween-themed dances. Also: The contestants are divided up and perform in two team dances: Team Monster Mash and Team Phantom of the Opera.”

Tonight Dancing with the Stars (DWTS) begins tonight professional dancers performing the “Time Warp” as everyone is introduced to the dancing duos, in their costumes, for tonight’s Halloween Night episode. First, the stars will do their individual dances and then we will have two teams perform – Team Monster Mash Versus Team Phantom of the Opera.

Victoria was devastated at being in the bottom two of the leaderboard last week, but Val reminds her that she escaped death. Val says he has a challenge because his partner doesn’t have dance experience and during rehearsal, he tells her to dance with him like she would dance with the love of her life. Judges’ comments – Len: The routine was super and the dance was natural and delightful. You floated across the floor like a leaf on a stream. It was beautiful! Bruno: Beautiful to watch and I have to praise you for taking comments about your arms. It was simply beautiful. Carrie Anne: this time I definitely felt you were connected to your emotions, it all felt magical. Scores: Carrie Anne: 9 Len: 9 Bruno: 9 Total: 27/30

Both are determined to get another 10 from Len, as they have been at the top of the leaderboard from the beginning. Judges’ comments – Bruno: it was the biggest, worst Paso EVER! The choreography was insane and you had the visual impact of Michael Jackson’s Thriller, yet you put all the elements of a Paso Doble in there. It was insanely good. Carrie Anne: I’m struggling because it was aggressive and different from the routines we have seen in the past. I liked it because DWTS is about stretching yourself, I think the new personna worked. Len: There were plenty of tricks and treats. I have to be honest, I watch you closer than any other celebrity. You little devil, you dance like an angel! Scores: Carrie Anne: 10 Len: 10 Bruno: 10 Total: 30/30

Nikki Bella and Artem Chigvintsev – Jive – “I Put a Spell on You” by Bette Midler (“Hocus Pocus” version).

Nikki feels she was responsible for the fall last week. She says Artem is funny and a very sweet, fun loving man, telling the ladies he is single. She wonders if they would have gotten 10s if they hadn’t fallen? Judges’ comments – Carrie Anne: I appreciate that you really tried to extend your feet, I felt it but unfortunately you’re focusing on it too much and disconnected with the music. You were strong and I liked the confidence. Len: The footwork was sharp, but it lacked a bit of punch throughout the routine. (Everyone boos). There was no horror story about the dance, it was clean, the kicks and flips were sharp but it needed more oomph! Bruno: I think you started out very well, the intentions were good but there were a few mishaps and you couldn’t get back in gear again. I’m sure you will be back next week and kill it! Scores: Carrie Anne: 8 Len: 8 Bruno: 8 Total: 24/30

Vanessa says last week was bittersweet as Nick went home; the kids are happy he is home and he can be Mr. Mom. Maks says his goal this week is to get all 10s as Vanessa says she needs to trust in her partner. They both feel they are not out of the count yet for the Mirrorball trophy. Judges’ comments – Len: this was lacking the Pasa Doble choreography. You had a great attitude (he is interrupted by the Grim Reaper walking behind the judges’ table). He tells Bruno to carry on… Bruno: That was a fright fest. You need to listen, I told you before when you put so much emphasis in your movements you lose control. It looks a bit fuzzy at times and you need to slow it down. Carrie Anne: It’s hard because I have such high hopes for you. You are powerful, but I agree with Bruno, sometimes you lose your balance and there was a bit of a wardrobe malfunction. You need more balance in your movement and stronger on your feet. Scores: Carrie Anne: 8 Len: 8 Bruno: 8 Total: 24/30

Cheryl praises Terrell for last week’s performance as he hit every step. He praises her for being a great teacher and appreciates her. Judges’ comments – Bruno: Super slick with a deadly bite but always charming. Cheryl, you really got him doing the proper tango correctly. Carrie Anne: I think you’re better when there is a lot of movement. There is so much growth and you are hungry for it, but keep the flow through the tighter movements. Len: I agree with Cheryl, you are doing a wonderful job. It was a proper stalking of the floor. Scores: Carrie Anne: 8 Len: 8 Bruno: 9 Total: 25/30 (Sasha sneaks up in a killer clown costume and scares Cheryl)

Lindsay is having difficulty due to her rib injury from last week’s rehearsal. Mark tells her she is a tough little cookie even though she feels her displaced rib. She cries because she is in too much pain to rehearse and they go to urgent care. If she didn’t perform she would be forced to forfeit. Tom tells her to sit on the floor as she is in dire pain. She thinks the Paso Doble is a BEAST! Judges’ comments – Carrie Anne: The dance isn’t the beast – You are! That was a really difficult routine, and I could see the pain in your face and back but wasn’t present in the movements. I am so impressed. Len: I am a fan of your dancing and nothing today will change my opinion. I liked that you came out with attack and aggression, but wasn’t keen on the Riverdance flavor to it. Bruno: That was so ambitious and intriguing. The speed of the dance was almost impossible to do when you are well. Scores: Carrie Anne: 9 Len: 9 Bruno: 9 Total: 27/30

Frankie Muniz and Witney Carson – Contemporary – “Every Breath You Take” by Chase Holfelder.

Frankie hopes they survive this week after so many mishaps from last week. Judges’ comments – Len: That is my theme song. I’m not a fan of horror movies but that was 1 ½ hours of horror I thought was fantastic. Bruno: You two tonight were truly inspired, the storytelling and the dramatic tension was throughout the dance. It was spine tingling good! Carrie Anne: I love when I see something that elevates the world of dance. It was totally mesmerizing to watch the storytelling over the movement. The DWTS Emmy goes to Whitney and Frankie!! Scores: Carrie Anne: 10 Len: 10 Bruno: 10 Total: 30/30

Drew Scott and Emma Slater – Charleston – “Remains of the Day” by Danny Elfman.

After the awkward routine last week, Drew and Emma are fighting to get out of the basement on the leaderboard. Drew says it doesn’t feel good to work so hard and be on the bottom; Emma assures him that she believes in him. Judges’ comments – Bruno: My Darling, that was murder on the dance floor that was most delicious. You kept up with the changing tempo which is very hard. Keep doing this as it worked! Carrie Anne: This was what I think of you when you dance. It was quirky and uplifting. You were so in sync, every line matched and I loved the energy right to the end and I think this was one of your best dances so far. Len: You have come back to life, it was fun, joyous and I loved every moment of it. Emma lets it slip that they fell and it wasn’t part of the choreography, but it worked into the routine. Scores: Carrie Anne: 9 Len: 9 Bruno: 9 Total: 27/30

Up next are the Team dances. Tom Bergeron reveals the surprise twist – Joining us is Season 1 Champion Kelly Monaco, Season 19 Champion Alfonso Ribeiro and Season 17 Runner-up Corbin Bleu, who are just a few of the stars returning to dance with the couples next Monday night in the trio round. Kelly says she is nervous as this ballroom is electric. Alfonso worries about going up against these people who are so good; Corbin is ready to jump back in!

FIRST RESULTS ARE IN

Before the Team dance is on, we learn that Jordan and Lindsay are safe this week. Terrell and Cheryl are in jeopardy. Lindsay and Mark are safe and Nikki and Artem are also in jeopardy.

Team Monster Mash kicks off the team dance round.

Everyone is on their feet as the team gathers for Judges’ comments. Len: Has a hard time eating corn on the cob because it is messy and for me, this was a bit messy. (Everyone boos). There was too much wheeling and dealing. It was a bit broken up for me. Bruno: You made an interesting choice because it is almost impossible to keep all the kicks and lifts in time with 8 people. It lost a lot of the sync and were much better individually but in the group number you lost the sync. Carrie Anne: it feels like you all under danced, in order to match each other, which was disappointing. The corn mazes it made your dance really small and because of that it didn’t engage me as an audience and it didn’t come together like you hoped. Scores: Carrie Anne: 8 Len: 8 Bruno: 8 Total: 24/30

The second team arrives on the dance floor as they are waiting to hear who else is safe and in jeopardy. The next couple who is safe is Frankie and Witney. Drew and Emma are in jeopardy. Victoria and Val are safe, leaving Vanessa and Maks in jeopardy. The final results will be revealed after the team dance.

Judges’ comments – Carrie Anne: Words fail me, that was by far the best and most exquisite team dance ever. Len: Call me Andrew Lloyd Webber as that was the most polished, team dance I have ever seen. Bruno: I am telling you, that was a splendid, theatrical extravaganza. They choices were absolutely genius. It was flawless in construction. (Tom has to move it along). Scores: Carrie Anne: 10 Len: 10 Bruno: 10 Total: 30/30

Tom immediately announces the results, calling forward the couples in jeopardy. The Grim Reaper hands Tom and Erin a black envelope, the next couple who is safe is Drew and Emma. Terrell and Cheryl are also safe. The remaining couples hug as this 7th week of competition comes to a close with a double elimination, both couples are going home!