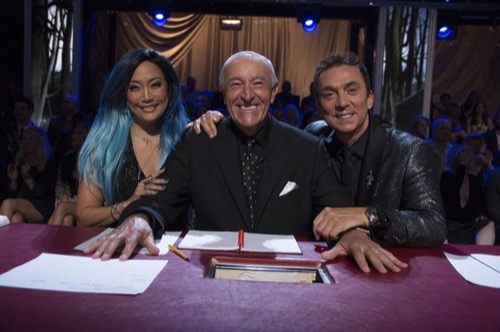 Tonight on ABC the glitz and the glimmer returns to the ballroom as another new episode of Dancing With The Stars season 25 airs! We have your all-new Monday, November 6, 2017, season 25 Week 8 “Special Trio Night” DWTS  and we have your Dancing With The Stars recap below! On tonight’s DWTS Season 25 episode 8 as per the ABC synopsis, “An elimination occurs after the eighth week of competition, which features two dances from each couple, including trio dances with former winners and finalists from previous seasons.”

They were on the bottom of the leaderboard last week as Terrell says he is there to win it now. T.O. is concerned that he didn’t know the dance nor what it was a week ago, but he has been down before and it’s not how you start, it’s how you finish. Judges’ comments – Len: It was a trip back to the 20s. Of all our celebrities no one has improved more from week one as you. Bruno: I love how you capture the sense of style of the era, time and time again. Your star is still rising. Carrie Anne: I love when you’re athletic in your dances, and there is a lot of footwork, so light on your feet and you are peaking at the right moment. Scores– Carrie Anne: 9 Len: 9 Bruno: 9 Total: 27/30

Drew talks about how emotional this song makes him because of his wife, Linda. People begin to clap before they are even done. Judges comments– Bruno: a very intense, romantic dialogue set to music. Your intentions were clear side by side, but when you drifted it lost its flow. You can become blocky. Carrie Anne: Upper half of your body was beautiful and expressive but the bottom half wasn’t keeping up with the tempo Len: you sometimes lose the frame but I loved the emotional journey. Scores– Carrie Anne: 7 Len: 7 Bruno: 8 Total: 22/30

They are up next, but not before we learn Victoria suffered a spasm while training, causing her to be traumatized by what happened in her youth. Victoria looks forward to people seeing another side of her, the sexy side. Judges’ comments- Carrie Anne: Now that we are heading into the semi-finals, any comment I give you is to try and help/ I see you managed to focus on the intensity of the drama but your eyes a lot, so only when you had your eyes down I knew you were uncomfortable. Len: It was clean and exactly what it was supposed to be; I didn’t quite get to Argentina with it, however, it was a job well done. Bruno: looked good. Great shapes. Great lifts. Good lines, now you to act the part. Scores- Carrie Anne: 8 Len: 8 Bruno: 8 Total: 24/30

Lindsey shares how much pain she was in after her rib injury and them falling to the second last spot on the leaderboard. She now feels she is no longer broken and feels she can make a great come back. Judges’ comments – Len: Great imagination, but one or two bits a bit funky for me, there were a lot of bits I liked. I liked your bounce but you could have used a bit more hip action.. You didn’t look as sure-footed as you normally are. Bruno: You danced like an untamable wildcat. It wasn’t your standard samba but I liked it. Carrie Anne: Loved the creativity. You brought out your inner Beyonce this week and got wild but I’m going to agree with Len that you didn’t look as sure on your feet. It was a great and fantastic samba. Scores – Carrie Anne: 9 Len: 8 Bruno: 9 Total: 26/30

They were on the top of the leaderboard last week, which only added pressure because Frankie didn’t really think he would make it far and once they got their first 10, it got scary because now he was in it to win it. Judges’ comments – Bruno: It was so stylish and elegant, wonderful flow of moment but one thing to watch for is your shoulders rising because you need to keep that line down. Carrie Anne: So far for me, that was the closest things to perfection. She notices a moment Frankie lost control of Witney. Len: It was far from perfection, you never straightened your legs. Please, believe me, there wasn’t any rise and fall, you went from scary to “airy/fairy.” Score – Carrie Anne: 9 Len: 8 Bruno: Total:26/30

Jordan feels it was pretty rough falling to 4th on the leaderboard. He says his goal is to give Lindsay everything he can because she is the last of the pros who have to win a mirrorball. Judges’ comments – Carrie Anne: That was brilliant and sassy! Len: (Len stands and claps his hands and Jordan drops to the floor). Bruno: That was a quickstep like I had never seen before. It was the most demanding and intricate quickstep I’ve ever seen done and it was outstanding. Scores – Carrie Anne: 10 Len: 10 Bruno: 10 Total: 30/30

Now that the individual dances are down, DWTS will now do the trio dances which consists of professional dancers, celebrities and former celebrity contestants and winners! We will have to see if the trio dances can change any of the scorings tonight.

They seem to hit it off really well, especially with all the flirting between Terrell and Kelly; who gives her word that if they get three 10s, she will go on a date with him. Judges’ comments – Len: The first dance suited your personality but not this one, but having said that, the rumba is a tough dance for the guys and you did a great job. Bruno: You definitely broke the sexy back but I couldn’t quite look at all this sexy. Lots of side by side, well handled but more Rumba. Carrie Anne: I wanted to see more movement and challenge but it was well performed. Score: Carrie Anne: 8 Len: 8 Bruno: 8 Total: 24/30. Since Kelly didn’t specify where the 10s had to come from, the skybox all showed 10 as Tom Bergeron tells her it is “date night” for her and Terrell.

Judges’ comments– Bruno: That was definitely glitzy; I’m blinded by the funky disco feel. That was a very hard act to do and most of the timing was on, except for the cha-cha part, the disco parts were much better. Carrie Anne: Your new title “Prince of Soul”. You raised your game tremendously. Len; I liked that everyone contributed to that performance. Len throws up his arms and says it was awesome and he loved it! Scores: Carrie Anne: 9 Len: 8 Bruno: 8 Total: 25/30

Next week will be the semi-finals and Host Tom Bergeron reminds up that in two weeks we are closing out the season, with a two-night finale event.

Judges’ comments – Carrie Anne: sometimes when you had to go out on your own, it comes back to your acting and its when you’re at your weakest. Always remember you are the star and don’t forget to fall behind in your legs, and although it could be expected, I can’t give you extra credit for it. Len: I liked that it started slow and built up, it just needed to be a little bit more sharp and clear. It’s not a good medal performance but you are definitely on the podium. Bruno: The story was clever, but you know about he accuracy and precision in the legs, and I’m sorry it wasn’t much sharper. Scores: Carrie Anne: 8 Len: 8 Bruno: 8 Total: 24/30

The third trio is Lindsey Stirling & Mark Ballas & Kristi Yamaguchi. They DWTS’ Season 6 Champions (Kristi jokes whether the show was in color when it happened but Mark says there was no such thing as HDTV back them). They are dancing– Jazz – “Let’s Face The Music And Dance” by Seth MacFarlane.

Judges comments – Len: Some say there could be trouble again, but based on those two performances tonight, you have no trouble. It was terrific. Bruno: Classic Hollywood movie style. Everything I love, it was well done! Carrie Anne: there was just this incredible synergy, it was like I paid money to go see that dance. Scores: Carrie Anne: 10 Len: 9 Bruno: 9 Total: 28/30

The fourth trio dancing is Frankie Muniz & Witney Carson & Alfonso Ribeiro. Witney laughs at how similar Frankie and Alfonso are, as Alfonso says its the “child actor” thing. Frankie hopes he can keep up with Alfonso who tells him to see himself as the contender her believes he is. They are dancing the Jive – “Good Place” by Leo Soul.

Judges’ comments – Bruno: there is something about Witney that brings out the best in both of you. It was so in balance because you never overpowered each other, kept in touch and the sync for her to shine. Great performance. Carrie Anne: It was a strong performance but I saw your nerves Frankie, and mistakes like that count at this point in the competition. I think they move very differently and you brought them together beautifully. Len: full of energy, content, and fun. (Alfonso says he doesn’t get any Carlton). Frankie, you are a good dancer and I don’t want to hear you say you don’t know if you are equal or can remain. Tom reminds Frankie to stay confident too. (Alfonse says the Judges need to tell them that in their scores. Scores – Carrie Anne: 9 Len: 9 Bruno: 9 Total: 27/30

The final trio up for the night is Jordan Fisher & Lindsay Arnold & Corbin Bleu. Jordan and Corbin go back a long way, with Jordan admitting it was him who inspired him to do what he does. Lindsay reminds them that everyone is going to have their eyes on them and expect great things. Lindsay jokes she is in the twilight zone as they truly seem to be the same person. They will be dancing the Salsa – “Que Viva La Vida” by Wisin. What a GREAT finish to the night!! Tom jokes that it was like watching bookends. Judges’ comments – Carrie Anne: Hashtag Amazballs!! I have no words, but what you did was just “sick”. I love how Corbin and Jordan borrowed each others style of dance and learned from each other. Len: Its not difficult old Len, good music, dance with rhythm and style, and show me good technique and capture the character of the dance. No one can say two is company and three’s a crowd because in this instance three is perfect! Bruno: That was phenomenal, two bodies responding to one soul in the music. You nailed every move and this dance will go down in DWTS history; I absolutely believe that. Score – Carrie Anne: 10 Len: 10 Ben: 10 Total: 30/30 (Making Linsday and Jordan having a perfect 60/60 tonight.

The couple leaving the competition is TERRELL & CHERYL.