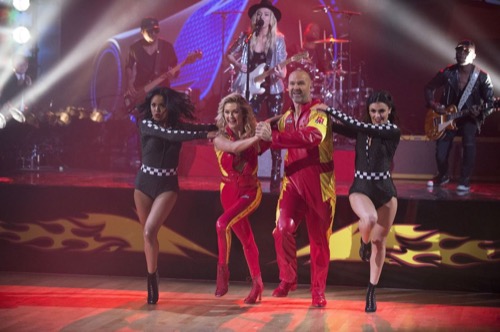 Tonight on ABC the glitz returns to the ballroom as Dancing With The Stars returns for the sixth episode of season 24 and it is Boy bands and Girl groups Night. American former professional baseball catcher in the Major League David Ross and his professional dancer Lindsay Arnold took the DWTS stage tonight and danced the Argentine Tango to “I Want You Back” by *NSYNC.

Len: The problem with this show is you get frustrated because you can’t do the steps. Plus, this week is a double whammy. With all that pressure, I thought you did a marvelous job.  Bruno: So stunning, so mean, a man on the mission to get the job done and you nearly did it. You nearly dropped her. If you do a lift, it has to be floating and weightless.  Carrie Ann: You don’t seem yourself and it’s hurting me. I know you went for a true Argentine Tango, I feel like you gave up halfway through. Nick: I have to ask this question. N’Sync or Backstreet Boys? I can tell that you are a fighter, in everything that you have done in your life. I thought it was your best work.