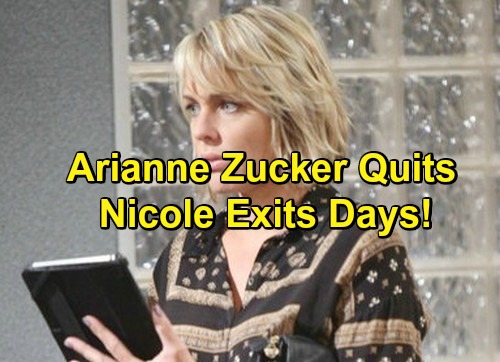 Days of Our Lives (DOOL) spoilers tease that Nicole (Arianne Zucker) is headed out of Salem. According to Soap Opera Digest, Zucker has decided not to renew her contract. She’ll be exiting the NBC soap when her current one is up in late April. This is certainly big news for Days viewers.

“Two years ago, I was contemplating making the shift,” Zucker told SOD. “I know there are a thousand girls who would take my job in a second, for me, it is my time to go.” Nicole has always been a fan favorite on Days of Our Lives. There’s no doubt that many DOOL watchers will hate to see her leave.

Of course, the recent writing for Nicole has caused some fans to turn against her. There have been complaints about Nicole’s ill-advised relationship with Deimos (Vincent Irizarry) and constant Daniel (Shawn Christian) mourning. It seems like the character changed after Nicole was paired with Daniel.

Nicole used to be the ultimate bad girl. She was sneaky and would do anything to get what she wanted. Days of Our Lives decided to take her character in another direction, but the reaction was mixed. Some people love Nicole as a schemer and others would rather see her do the right thing.

However, Nicole is a mom now and it makes sense that they would want to soften her conniving nature. Days of Our Lives spoilers state that Nicole will soon kidnap Holly, which will give us a taste of her scheming roots. After that plays out, Nicole should settle down and eventually get her baby back.

It’s worth mentioning that Days tapes nearly six months in advance. That means we’ll have some time to watch Nicole with her daughter. Sadly, Zucker’s decision to leave dashes the dreams of “Ericole” fans. Eric (Greg Vaughan) and Nicole had some sizzling chemistry. This pairing had real potential, but the ship is quickly sailing. 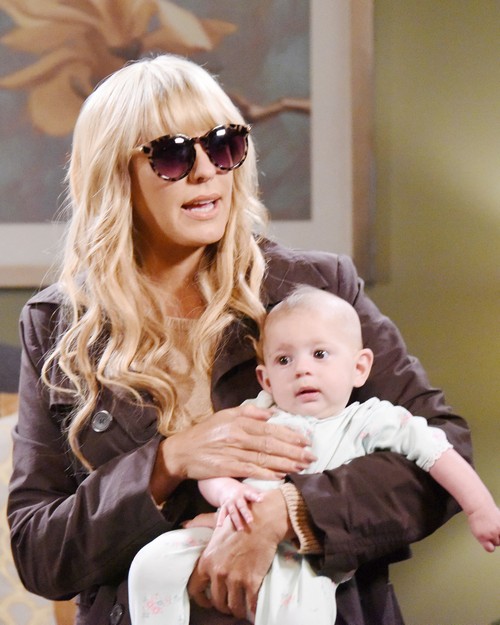 Let’s hope Nicole will at least find a way to forgive Eric before she exits. There’s a good chance Nicole will leave town for a fresh start elsewhere. She could take a job in another city and raise Holly in peace. It’s possible that the show will recast, but it might be tough to accept someone else in this particular role.

Arianne Zucker is a fantastic actress and DOOL will definitely miss having her around. We’ll give you updates if we hear about any new characters that might fill the void. Stay tuned and don’t forget to check CDL often for the latest Days of Our Lives spoilers, updates and news. Come and join in the LIVE discussion on our Facebook Page.