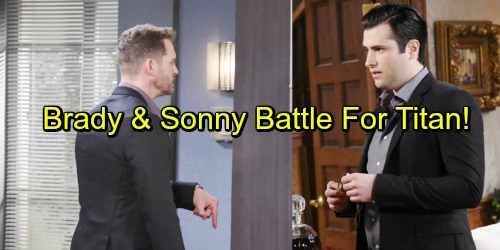 Days of Our Lives spoilers reveal that Brady Black (Eric Martsolf) will engage in some corporate warfare. He isn’t willing to give up his position at Titan and hand the company back to Sonny Kiriakis (Freddie Smith.) It will create a battle between the two that could turn brutal.

Sonny finally got what he wanted from Victor Kiriakis (John Aniston.) His trust and the responsibility of running a company. However, soon after, he confessed to murder. While he sat behind bars, somebody had to take care of business. Brady was a reasonable choice. However, he isn’t willing to let go of his position as CEO and hand it back to Sonny.

Days of Our Lives spoilers tease that both Brady and Sonny are under tremendous stress. Brady has issues with Nicole Walker (Arianne Zucker) and Eric Brady (Greg Vaughan.) The romance is spiraling out of control. In true addict nature, Brady will try to find something he can hold onto and control. That just happens to be Titan.

Sonny is also going through a lot, which will affect how he responds to Brady’s decision. He was verbally shredded by Lucas Horton (Bryan Dattilo) and is feeling guilty about Will Horton (Chandler Massey.) When talking to Chad DiMera (Billy Flynn,) Sonny was starting to lose control. Brady not handing the company over will just yet another frustrating situation.

Days of Our Lives spoilers hint that Brady and Sonny could get into a serious battle over Titan. They both feel they earned the right to be CEO. The two going to war over Titan will just mean that Victor must referee. He will ultimately have to make a decision and it won’t be an easy choice.

It seems that Victor might not give either of them control of the company. Brady has tons of experience and does his job well. However, he is distracted with Nicole right now. Plus, there is the problem of his drinking habit resurfacing.

As for Sonny, he went through a lot to prove himself to Victor. Unfortunately, he made some unpopular moves. A mass firing did not sit well with a lot of people. Plus, he confessed to murder without even considering how Titan would be affected.

It appears that neither Brady or Sonny can handle the responsibility of running a business right now. Which means that Victor might have to select someone else to take control. The question is, who will it be and will it create an even bigger problem?