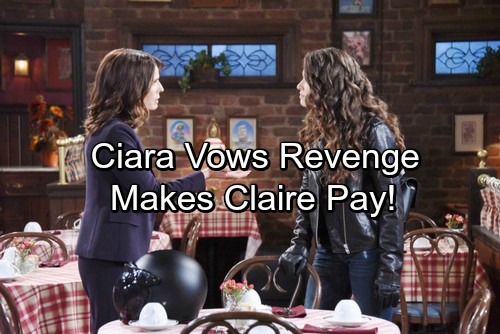 Days of Our Lives (DOOL) spoilers tease that Ciara’s (Victoria Konefal) return will bring major drama. She’ll come back with a grudge and Theo’s (Kyler Pettis) latest ordeal won’t help matters. Ciara will be distraught over her close friend’s dire health crisis. She’ll worry that Theo may never wake up, which should lead to severe guilt.

Ciara was furious when she learned Theo had been coaching Wyatt (Scott Shilstone) on her likes and dislikes. She felt like Theo thought she couldn’t get a boyfriend on her own. Ciara also found out her heartfelt letter to Theo had been stolen by Claire (Olivia Rose Keegan). It was all just too much for Ciara to handle, so she headed for Hong Kong.

Ciara will have concerns about how Theo felt about her. She’ll fear that he still thought she was angry with him. Ciara may blame Claire for pushing her over the edge during the last round of chaos. She may argue that she wouldn’t have left Salem if Claire hadn’t been so jealous and cruel.

Days spoilers say Ciara will have other problems with Claire’s behavior. She may think Claire wasn’t watching out for her beau. DOOL fans know that Claire was pretty rough on Theo shortly before the shooting. Ciara may contend that Claire stole her man and couldn’t even treat him right.

Claire’s battling guilt as well, so she may understand some of Ciara’s complaints. However, Days viewers have watched Claire fight back in situations like this. It’s tough to believe she’ll just take what Ciara’s dishing out. A heated argument is likely on the way.

Days of Our Lives spoilers state that Ciara won’t care about Claire’s excuses or insults. She’ll only care about revenge! Ciara will vow to make Claire sorry for everything she’s done. Their emotions will get the best of them as they wait for more Theo info.

Fortunately, Theo will come out of his coma sooner or later. Perhaps that will be enough to ease the tension between Claire and Ciara. Even if there’s some lingering conflict, Theo might help them tackle it. He definitely won’t want his two favorite gals at odds.

Can Claire and Ciara reach an understanding? Will they be able to restore their bond and let go of any resentment they’re feeling? We’ll give you updates as other Days of Our Lives news comes in. Stay tuned to DOOL and don’t forget to check CDL often for the latest Days of Our Lives spoilers, updates and news.