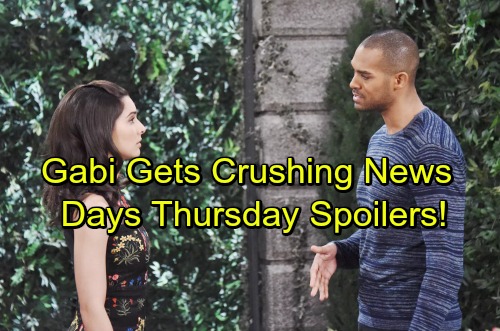 Days of Our Lives (DOOL) spoilers for Thursday, September 21, tease that Chloe (Nadia Bjorlin) will give Eric (Greg Vaughan) a heads-up. She’ll try to warn him about what she let slip to Brady (Eric Martsolf). Chloe revealed that Eric still has feelings for Nicole (Arianne Zucker), but Brady played it cool in front of her. It seems Chloe has her doubts about how much Brady actually knew.

Of course, Chloe is a little too late. Her warning won’t mean much now that Brady’s gone into Hulk mode. Days spoilers say Eric will give Chloe updates on their heated confrontation. She’ll feel terrible about spilling something she shouldn’t have, but Eric probably won’t blame her. This was bound to happen sooner or later.

Since Eric doesn’t want to fire Nicole, he’ll have to find another way to deal with the problem. Days of Our Lives spoilers state that Eric will leave town this Friday, but Marlena (Deidre Hall) won’t give up on him. She’ll locate her son next week to ask him some questions and figure all this out. 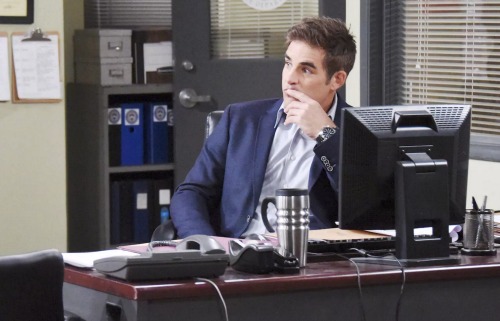 In the meantime, Chad (Billy Flynn) will react to Abigail’s (Marci Miller) rejection. He was interested in heading to the bedroom, but Abby quickly declined. Days spoilers say Abigail will explain herself in Thursday’s DOOL episode. They obviously don’t have virginities to protect, but Abby still intends to save herself until they tie the knot again. She wants their wedding night to be special.

Chad will assure Abigail that if she wants to wait, they’ll wait. He’d do anything to make her happy. Days of Our Lives spoilers indicate that Chad and Abigail will hit a few snags before their wedding, but they’ll manage to work through them together. Their devotion to each other will remain strong.

Unfortunately, Rafe (Galen Gering) and Hope (Kristian Alfonso) will face some awkwardness in their own relationship. They’re both up for the position of police commissioner, but they’ll try to keep the competition friendly. Nevertheless, this work rivalry will certainly add to their engagement difficulties.

Finally, Gabi (Camila Banus) will receive some upsetting news. She’ll discover that she was the reason Eli (Lamon Archey) got fired. Eli will undoubtedly point out that the FBI wanted a reason to cut him loose. He made poor decisions in the past and that’s not Gabi’s fault.

Still, Gabi will be grateful for Eli’s bravery and sacrifice. Are Gabi and Eli on the road to love? We’ll keep you posted as other DOOL details emerge. Stay tuned to the NBC soap and don’t forget to check CDL often for the latest Days of Our Lives spoilers, updates and news.