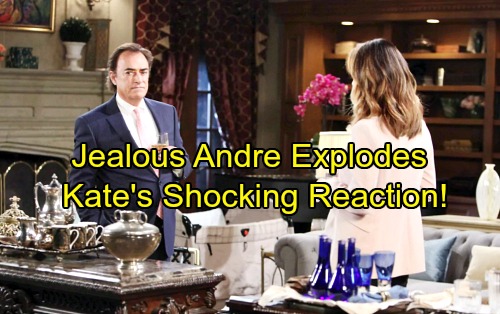 Days of Our Lives (DOOL) spoilers tease that Kate won’t be sure how to handle Roman’s newfound confidence. He just planted a passionate kiss on her and she won’t know how to react. DOOL spoilers hint that Kate will try to let Roman down gently, but she’ll still probably give this some serious thought.

Despite any old feelings that might be stirred up, Kate will think it’s best to leave them in the past. Nevertheless, Days spoilers say Andre (Thaao Penghlis) won’t be happy. He just witnessed the lip lock and it obviously left him fuming. Over the next few episodes, Andre will continue to stew over Kate’s willingness to kiss another man. 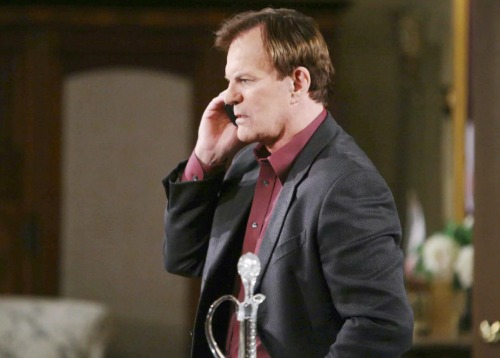 Days of Our Lives spoilers state that Andre will eventually lash out at Kate. He’ll just won’t be able to control his jealousy anymore. Of course, Kate will remind Andre that their marriage is merely an arrangement. She wanted to score the CEO position and Andre went along with it to help DiMera Enterprises.

Kate will point out that there’s no romantic element to their relationship, but maybe she’s mistaken about that. Their constant clashing is likely a form of sexual tension. It’s clear that there’s some sort of strange connection between them.

Days of Our Lives spoilers say Andre will still view this as a betrayal. He’ll seek control of DiMera Enterprises as a way to cause pain. Andre’s ruthless move could convince Kate to fight back. After all, Kate is not a woman to be messed with. She may have some men issues, but she doesn’t let them walk all over her. 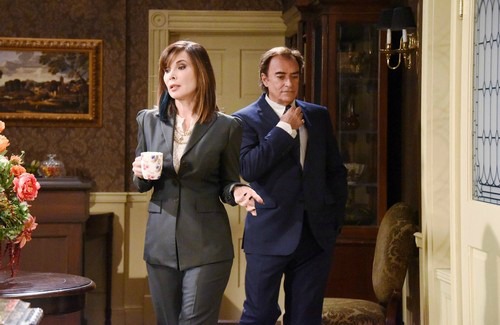 However, there’s a possibility that Andre’s reaction will touch Kate deep down. She may decide that Andre cares more than he’s been letting on. Days spoilers suggest that Kate and Andre have plenty of fun scenes coming up. Will true love bloom in the midst of the conflict?

Kate and Andre make a nice pair, but they could be moving into dangerous territory. If their potential romance goes wrong, their revenge schemes might get ugly. Both of them could strike severe blows if they can’t learn how to deal with all this.

Who do you think Kate belongs with? Are you hoping Andre and Kate will really fall for each other? Would you rather see Kate with Roman or perhaps another Salem suitor? We’ll give you updates as other DOOL news emerges. Stay tuned to the NBC soap and don’t forget to check CDL often for the latest Days of Our Lives spoilers, updates and news.