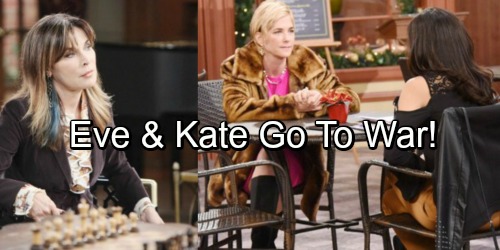 Days of Our Lives (DOOL) spoilers tease that Eve’s (Kassie DePaiva) latest move could backfire. She’ll gain a fierce enemy thanks to the play she made for Gabi’s (Camila Banus) company. Eve wants “Gabi Chic” and she’s hoping her enticing offer will win out in the end.

Naturally, Kate’s (Lauren Koslow) going to explode over the competition. Days of Our Lives spoilers say Kate will rip into Eve for trying to lead Gabi astray. She’ll think DiMera’s the only place where Gabi Chic will thrive.

Eve will point out that no deal had been made, so Gabi Chic was fair game. She’ll feel like Basic Black is a better fit for Gabi, so the battle will heat up. Days spoilers indicate that Kate and Eve will get into a major shouting match. They’re both cutthroat when it comes to business.

In fact, they’re pretty ruthless in all areas of their lives. That’s what it takes to succeed in Salem, so they’re willing to fight for what they want. At some point, DOOL spoilers say Gabi will shut down the conflict. She’ll think all of this is getting out of control.

Kate and Eve will demand Gabi’s decision, but one of them will obviously end up disappointed. Days of Our Lives spoilers suggest that Gabi may decide to go with DiMera. Eve’s proposal was awfully tempting, but Kate was first and Gabi probably trusts that Chad (Billy Flynn) won’t let her be swindled.

Even if Gabi doesn’t make a full-fledged deal, she’ll definitely be in Chad and Abigail’s (Marci Miller) orbit more. Days spoilers hint that the tension could truly lift. Things have been awkward since Chad chose Abby, but it’s time for everyone to move on. Gabi, Abigail and Chad could all find a way to be real friends again.

As for Eve, she’ll probably hold a grudge against Kate. Eve may scheme against her rival in the months ahead. It sounds like Gabi’s little company could kick off a huge war! We’ll give you updates as other Days news comes in. Stick with DOOL and don’t forget to check CDL often for the latest Days of Our Lives spoilers, updates and news.