Days of Our Lives Spoilers: Lonely Eric Needs Love – Which Woman Should Mend His Broken Heart? 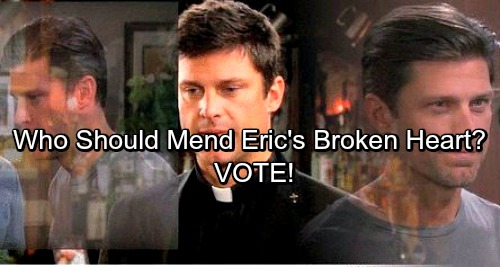 Days of Our Lives (DOOL) spoilers tease that Eric (Greg Vaughan) will continue to feel broken and alone. He was crushed when Nicole (Arianne Zucker) denied her love for him and walked out. Many Days viewers were just as devastated!

Nevertheless, there’s hope for Eric’s future. He can surely rebuild his life with another lucky lady. Who should be Eric’s next love interest? Here are some options to consider.

Jennifer (Melissa Reeves) is the obvious runner-up for Eric. After she found out Eric was still in love with Nicole, Jen took herself out of the picture. That proves just how much Jennifer cherishes Eric. She was willing to walk away so Eric could resolve his issues and find happiness.

Of course, happiness isn’t really possible in Salem – at least not for very long. Now that Eric’s lost his true love, could he return to his backup gal? Jennifer would have no problem coming in second place. As long as Eric’s the hunky prize, who cares about the exact rankings?

Chloe (Nadia Bjorlin) is another great option for Eric. These two could be smokin’ hot together! Days of Our Lives fans can see the potential for sizzling chemistry between them. Perhaps they should take their bond out of the friend zone. Chloe and Eric would make a cute couple if Days chooses to go that route.

At one time, Eve (Kassie DePaiva) and Eric tried to form a friendship. That was cut short after Eve’s departure, but they could pick up where they left off. Could you buy Eric and Eve as love interests? They’ve both made mistakes, so maybe they could connect over them. As a bonus, Jennifer wouldn’t like this pairing one bit. Bring on the catfights and soap slaps!

Several major returns are happening over the next few months, so we won’t see any newbies just yet. DOOL’s head writer, Ron Carlivati, wanted to focus on the current cast before he created new characters. However, that could give Eric a chance to heal and take care of himself.

Even if Eric hooks up with another woman on this list, he could still find someone new in the spring. Would you like to see Eric with a fresh face? Regardless, Eric will have to find a way to let go of Nicole and move on.

Let us know who you think Eric’s next love interest should be! We’ll give you updates as other Days of Our Lives news comes in. Stay tuned to DOOL and don’t forget to check CDL often for the latest Days of Our Lives spoilers, updates and news.