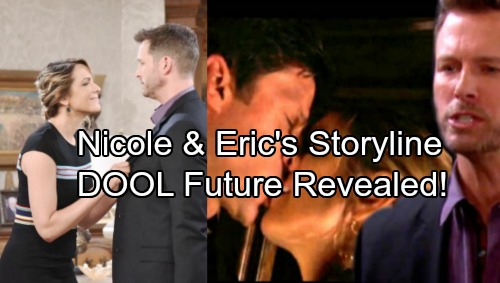 Days of Our Lives spoilers tease the future of “Ericole.” What is going to happen to these characters? With Arianne Zucker leaving DOOL soon, Nicole Walker is going to leave Salem. However, what happens to Eric Brady (Greg Vaughan?) Fans are not going to believe what the soap might have in store for these two.

So far, people are debating whether Nicole leaves Salem alone or if Eric goes with her. However, there is a twist that nobody is expecting. DOOL spoilers confirm that the two will confess their feelings for one another. Naturally, the next step for them to express their love in a physical way.

However, expect Brady Black (Eric Martsolf) to find out Nicole has been lying to him. Once he gets wind of “Ericole,” he will blow a gasket. Determined to get revenge, he could do the unthinkable.

Despite Vaughan appearing in Queen Sugar, Days of Our Lives spoilers imply that it is short-term. That means he is sticking around town. It sounds like Nicole won’t be exiting with Eric. However, their romantic union may end up with a secret and surprising result.

It is possible that Nicole gets pregnant. We know her fertility issues, but miracles happen all the time. Remember, Eric is a former priest, so what better person to give a miracle to than him? However, the kicker is that Nicole will leave town before Eric ever knows.

In an interview, Arianne Zucker said that she was opening to returning someday. In fact, DOOL spoilers confirm that the exit leaves an opening for her to come back.

In traditional soap opera style, Nicole will leave town, find out she is pregnant and raise the child herself, along with Holly. Many years later, she will come back with a big secret.

Another option is that a strange man will move to Salem (yes, we think it will be a boy) and Eric will find out that he is a father. Of course, daytime television will put some sort of tension in their relationship. You can’t have a father-son reveal without some sort of chaos.