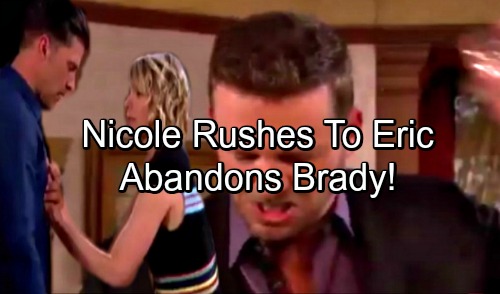 Days of Our Lives (DOOL) spoilers tease that Chloe (Nadia Bjorlin) will let Nicole (Arianne Zucker) in on a secret next week. She’ll believe Nicole deserves to know the truth. When it comes to matters of the heart, honesty is the best policy. Eric (Greg Vaughan) admitted that he had deep feelings for Nicole and now Chloe’s about to spill the beans.

Nicole recently realized she had feelings for Eric as well. Unfortunately, Brady (Eric Martsolf) remains a major issue. Nicole doesn’t want to break Brady’s heart, especially since he’s been in such a fragile state. Of course, the rest of Chloe’s admission should change the game.

Days of Our Lives spoilers say Nicole will find out about Brady’s scheme. She’ll learn that Brady pushed Eric to fire her, which led to his decision to leave town. Nicole will struggle to wrap her head around Brady’s sneaky move. She’ll be hurt by his deception and appalled by his attempt to control her. 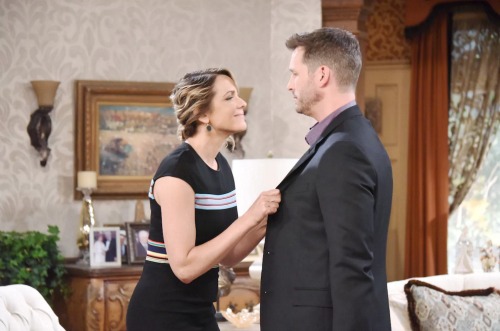 Brady was willing to take away a job that Nicole loved, so he deserves to be called out for his selfishness. However, Nicole may decide to rip into Brady later. Finding Eric will be her priority. Since Marlena (Deidre Hall) knows where Eric is currently living, perhaps she can give Nicole the address.

Days spoilers say Nicole will face a flood of emotions as she prepares to see Eric. Chloe’s updates will undoubtedly make Nicole want to share how she feels. There’s a good chance Nicole and Eric declare their love for each other. DOOL viewers should see some heartfelt moments for these former flames.

Alas, Nicole’s impending Days exit presents a problem. Eric and Nicole aren’t going to be a long-term couple, but maybe we’ll get a little taste of a reunion before Nicole leaves. Kisses are pretty much guaranteed, but what about a sex session? Will Nicole and Eric make love soon? “Ericole” fans certainly hope so!

As for Brady, losing Nicole could take a toll. Days of Our Lives spoilers reveal that Brady will sneak drinks as he copes with his pain. Brady could be headed down a very destructive path. He’s going to need some serious help to get through this crisis.

In fact, Brady may need a full-on intervention if this keeps up. His downward spiral is sure to be brutal. We’ll keep you posted as other DOOL news comes in. Stay tuned to the NBC soap and don’t forget to check CDL often for the latest Days of Our Lives spoilers, updates and news.