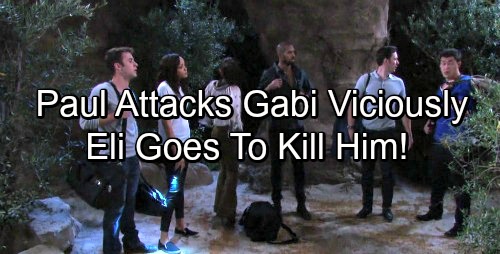 Days of Our Lives (DOOL) spoilers tease that Lani (Sal Stowers) and JJ (Casey Moss) will uncover some disturbing info. After stumbling across a skull and an old shelter, they’ll locate a diary with some stunning entries. They’ll quickly pass along what they’ve learned to the rest of the group.

Sonny (Freddie Smith), Eli (Lamon Archey), Gabi (Camila Banus) and Chad (Billy Flynn) will get updates on the journal’s revelation. They’ll find out that someone living on the island received a fateful bug bite. This island has mosquitos that carry a strange type of jungle fever. A man who was bitten went completely nuts and killed his wife.

Suddenly, Paul (Christopher Sean) will give the gang a shock. His wild appearance and bizarre behavior will tell them something’s up. Paul will admit that he got a mosquito bite. Days spoilers say everyone will be incredibly concerned. They’ll sit down for a meal as they try to figure all of this out.

Meanwhile, Paul will break away from the group to grab a knife. He’ll struggle to control his violent desires. Paul will manage to avoid going on a stabbing rampage, but he’ll still find ways to act out. Once Eli vanishes, major fears will emerge. The island crew won’t know where Eli is or what kind of trouble he might be in.

Later, Paul will pick up a rock and hurl it at Gabi’s head. Days of Our Lives spoilers state that she’ll be knocked out cold. Chad and the others will make sure Gabi’s OK before they turn their attention to finding Paul. That’s when Eli will finally return. His announcement will certainly catch everyone off guard.

DOOL spoilers say Eli will insist that Paul came after him. He’ll reveal that they had an intense showdown, which resulted in some injuries. As Eli brandishes a gun, he’ll declare that Paul must die. Eli will feel like they need to kill Paul before they all end up dead.

Naturally, Days fans can expect Sonny (Freddie Smith) to protect his beau. He’ll maintain that there must be another option. Since we know Paul will survive, perhaps they’ll find some sort of cure. If not, they may just have to tough it out until they’re rescued and Paul can get to a hospital.

It looks like some excitement is in the works. We’ll keep you posted as other Days of Our Lives news comes in. Stay tuned to DOOL and don’t forget to check CDL often for the latest Days of Our Lives spoilers, updates and news.