Days of Our Lives Spoilers: Sami Lands Behind Bars, Rafe Blasts Hope for Harsh Arrest – What Did Sami Do? 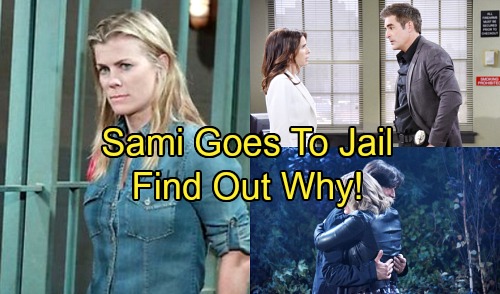 Days of Our Lives (DOOL) spoilers tease that Sami’s (Alison Sweeney) determination will be on full display. When her children are involved, everyone had better watch out! Sami would do anything for her kids, even if it means spending the night in jail. That’s exactly where Hope (Kristian Alfonso) intends to put Sami pretty soon.

On October 24, DOOL fans can expect a heated argument at the police station. It seems Sami will commit a crime she revs up her mission to find Will (Chandler Massey). Rules and boundaries mean nothing when Sami’s son is still out there. Will is all that matters to this “Mama Bear” right now.

Of course, Hope (Kristian Alfonso) is trying to prove herself as Salem’s new police commissioner. Rafe (Galen Gering) already suggested Hope was giving preferential treatment to JJ (Casey Moss) because he’s family. However, Rafe could change his tune once Sami’s behind bars. 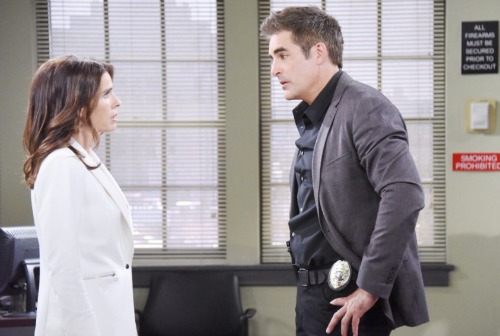 Days of Our Lives spoilers hint that Hope and Rafe’s conflict will explode after Sami’s arrest. Since Rafe and Sami have a history together, he’ll likely step up for his ex. Rafe may argue that Hope went too far. He may think there should be a balance between going strictly by the book and providing reasonable leeway.

However, Rafe isn’t the boss here. It’s really none of his business, even if he might be right. If Rafe continues to undermine Hope, their relationship could be headed downhill fast. Days spoilers state that Sami will also give Hope an earful. She’ll mostly be upset about being in police custody when she could be off finding Will.

Hope will understand that Sami is going through a tough ordeal, but she’ll refuse to let her go around breaking the law. Fortunately, Days spoilers say they’ll reach an agreement sooner or later. Once Sami’s released, she’ll meet up with Paul (Christopher Sean) and Sonny (Freddie Smith) to compare notes. John (Drake Hogestyn) and Marlena (Deidre Hall) will join the search party as well.

After new clues emerge, the whole gang will head off to Memphis for real answers. Other Days of Our Lives characters will join them eventually. This mystery will bring some exciting encounters and many heartwarming reunions. We’ll give you updates as other DOOL news comes in. Stick with the NBC soap and don’t forget to check CDL often for the latest Days of Our Lives spoilers, updates and news.