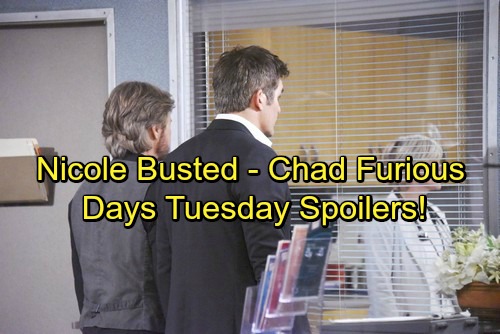 Days of Our Lives (DOOL) spoilers for Tuesday, July 4, tease that secrets will continue to cause big trouble in Salem. It may be Independence Day, but no one will really be in a celebratory mood. For starters, Kayla (Mary Beth Evans) will be under fire at the hospital. Tripp (Lucas Adams) has a cruel scheme in motion and it’s sure to create more problems for his stepmom.

DOOL spoilers state that Tripp will set up a second mistake to make Kayla seem incompetent. Once Kayla thinks she’s made another error, she’ll undoubtedly panic. Kayla is a great doctor and she’s not used to committing serious blunders like this. She’ll fear that she’s losing her grip and that could mean bad news for her career. 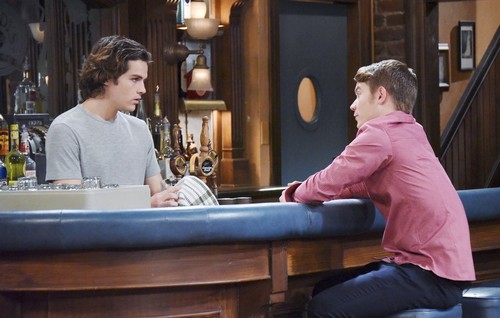 Tripp is already feeling a little guilty about his plot, but he still wants to avenge his mother’s death. Days spoilers say Joey (James Lastovic) will give Tripp additional info about Ava (Tamara Braun) in Tuesday’s episode. Will it intensify Tripp’s guilt or feed his desire for revenge? Regardless, Tripp will move forward with his plan for now.

Other Days spoilers reveal that Steve (Stephen Nichols) will pass along a suggestion to Roman (Josh Taylor). It’s not clear what this is about, but it involves an offer of some sort. Perhaps Steve needs Roman’s help at Black Patch. Now that Roman has retired from the police force, maybe he could do some private investigating. He could at least pitch in this once if Steve is asking for a favor. 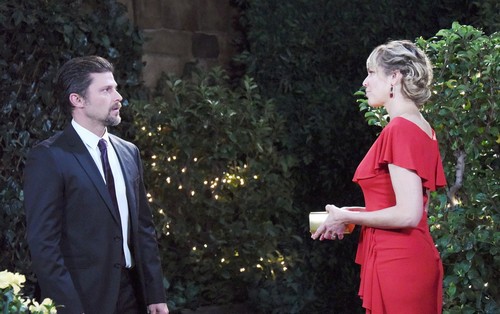 Meanwhile, things will be tense at the club. Days of Our Lives fans know that Chad (Billy Flynn) just walked in on Abigail (Marci Miller) and Dario’s (Jordi Vilasuso) impromptu wedding. He’s not happy, but what can he do? This is Abigail’s life and she gets to make her own choices. Gabi (Camila Banus) will join Chad and they’ll agree to serve as witnesses to this ill-advised marriage.

Elsewhere, Days of Our Lives spoilers say Nicole (Arianne Zucker) will get tripped up by her lies. It looks like this is about the night of the wild party. Brady (Eric Martsolf) will realize something’s up when Eric (Greg Vaughan) spills another version of what happened. Nicole will have to think fast if Brady demands the truth.

DOOL has some nice scenes in store for us. We’ll give you updates as other details emerge. Stick with the NBC soap and don’t forget to check CDL often for the latest Days of Our Lives spoilers, updates and news.