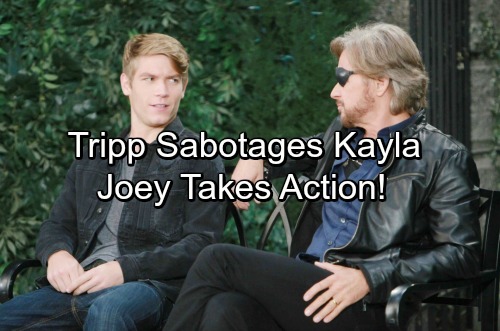 Days of Our Lives (DOOL) spoilers tease that Tripp (Lucas Adams) will nail down the details of his plot. He feels certain that Kayla (Mary Beth Evans) killed Ava (Tamara Braun), so he’s naturally thinking about revenge. Tripp struggled to believe that such a kind woman could be capable of murdering his mother, but now he seems to have accepted it.

Jade (Gabrielle Haugh) was furious when Kayla cut her off financially and scolded her for all the Joey (James Lastovic). It’s clear that Kayla would like to get Jade out of their lives forever. Unfortunately, Tripp may be the bigger threat at this point. Jade has slowly been turning Tripp against Kayla and that’s sure to spell trouble.

DOOL fans know that Jade encouraged Tripp to hate Kayla, not Steve (Stephen Nichols). She insists that Steve actually took the blame to protect Kayla. Tripp was even more convinced when Adrienne (Judi Evans) mentioned Steve taking the fall for her own crimes in the past. Everything is lining up for vengeful Tripp. 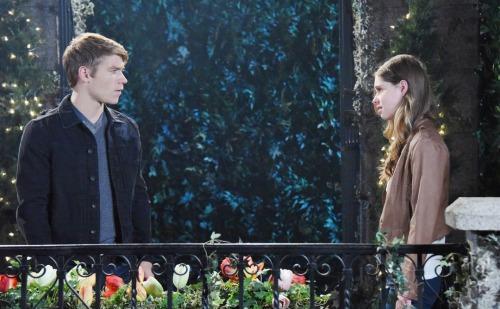 Days of Our Lives spoilers state that Tripp will fully commit to his plan of taking down Kayla. Since she’s a respected doctor in Salem, Tripp will decide to target her career first. He’ll have the perfect opportunity since he’s going to be working at the hospital. Tripp will have plenty of chances to sabotage Kayla behind her back.

Once things start going wrong, Kayla will frantically fight for her job. She’ll probably be under intense scrutiny by the time Tripp is through with her. Kayla’s medical license could be revoked if Tripp’s scheme pays off. Of course, Tripp may not stop there. His anger could spiral out of control eventually.

Days of Our Lives spoilers hint that suspicions will emerge for Steve. He’ll begin to think there’s a dark side to the son who just walked into his life. Steve will hope that he’s wrong, but he trusts his instincts. His investigation may lead him to some tough revelations.

It looks like Joey will wonder what’s up, too. Days spoilers suggest that Tripp’s plot will get out of hand. After Joey discovers Tripp’s dangerous game, how far will he go to protect his mom? Will he turn himself in and face the consequences? We’ll give you updates as other Days news comes in. Stay tuned to DOOL and don’t forget to check CDL often for the latest Days of Our Lives spoilers, updates and news.