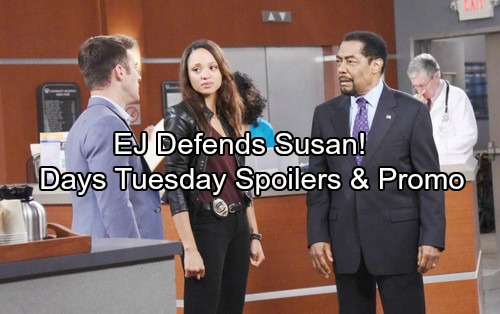 Days of Our Lives (DOOL) spoilers for Tuesday, November 14, tease that JJ (Casey Moss) will try to explain this difficult situation to Abe (James Reynolds). He’ll apologize for putting Theo’s (Kyler Pettis) life on the line and insist that he thought a gun was pointed at him. Abe won’t be interested in JJ’s excuses. He’ll blast his son’s shooter for what he believes is reckless behavior.

Lani (Sal Stowers) seemed like she might be on the fence about all this, but she’ll quickly take JJ’s side on Tuesday. Despite her panic and sorrow, Lani understands that things are a bit tricky. Days of Our Lives spoilers state that Lani will defend JJ’s actions, but Abe will continue to rant. He may think Lani’s wrong for backing up her boyfriend over her brother.

While Lani and Abe await word on Theo’s condition, JJ will head to the police station. Days of Our Lives spoilers say Hope (Kristian Alfonso) will need to ask JJ a few questions. He’ll get quite emotional as he describes a criminal chase that went horribly wrong. JJ told Theo to drop his weapon, but he turned around and aimed it at him instead.

Of course, the fact that it wasn’t actually a gun makes this even more complicated. Days spoilers reveal that Hope will listen to JJ’s version of events and offer her opinion. It looks like she may support JJ’s decision to shoot, but this is out of her hands. A thorough investigation will have to be done, so JJ will hand over his badge and weapon. 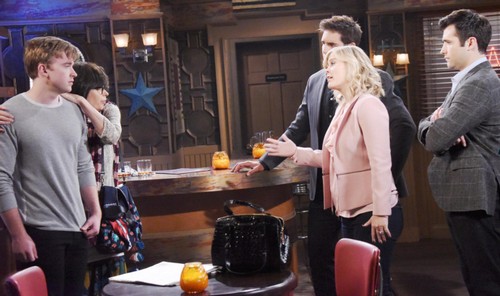 DOOL will undoubtedly bring Theo’s high-functioning autism into this storyline. He doesn’t do well under pressure, so Kate (Lauren Koslow) never should’ve let him commit a crime for her. This heartbreaking plot will certainly divide the town in the coming months.

Meanwhile, a confrontation will heat up in Memphis. Days spoilers say Sami (Alison Sweeney) and Sonny (Freddie Smith) will struggle to wrap their heads around Will’s (Chandler Massey) claims. He’s convinced that he’s EJ, so this is turning into a real mess! As Sonny and Sami lash out at Susan (Eileen Davidson), “EJ” will rush to her defense.

Marlena (Deidre Hall) will get updates on Will’s survival in Tuesday’s episode, so at least someone will get good news. She’ll be overjoyed when John (Drake Hogestyn) shares Paul’s (Christopher Sean) confession. We’ll keep you posted as other DOOL details emerge. Stay tuned to the NBC soap and don’t forget to check CDL often for the latest Days of Our Lives spoilers, updates and news.